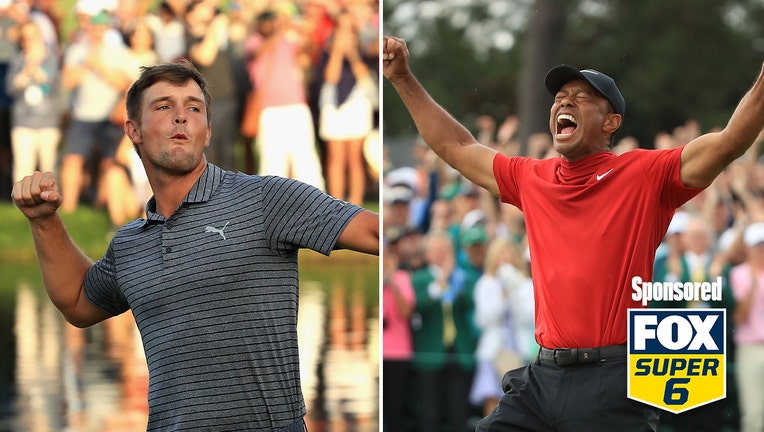 The blossoming images from a Georgian spring have been replaced for one year by the foliage of Augusta’s fall landscape.

And yet, the soft ruffle of piano music fills the air and the world’s best golfers will head to The Masters this weekend with the hope of putting on the green jacket at the season’s third and final major tournament.

And with FOX’s Super 6, you can put some green in your jacket pockets. You could win $10,000 by answering six questions correctly in the final grasp of glory of this golf season.

Here are the six questions at play you will have to answer.

What will Tiger Woods shoot in the first round of the Masters?
The answers are 3-under par or better, 2 under, 1 under, even par, 1 over par or 2 over par/worse.

The defending champion arrives at Augusta after a light PGA Tour schedule – playing in only two events (the US Open in September and the Sherwood Championship in late October- since the FedEx Cup.  Since the sport returned from the COVID-19 break, Woods’ best finish was tied for 31st at the PGA in San Francisco. That being said, his best rounds have often been in the first round-  including two in the 60s.

At Augusta, Tiger has five wins and seven other Top 5 finishes. He loves the course and it plays to his strengths- including forgiving fairways that allow him to scramble to save pars. Don’t be surprised to see red numbers early.

Which of these golfers will have the most birdies by the end of the 2nd round?
The answers are Phil Mickelson, Tiger Woods, Bubba Watson, Jordan Spieth, Rickie Fowler or  tie.

If there’s one guy out of this list to keep an eye on, it would be Watson, who has two green jackets and finished fourth at Sherwood at October 25. Of the list above, he’s been the one with the best finishes and among the most active schedules during the stretch. He knows how to play through Augusta’s different challenges, survive and score. He may have the best shot to be in contention out of that bunch.

DeChambeau’s grip it and rip it style can work at Augusta, where driving long and cutting approach shots down is critical. However, it is worth noting that his best previous finish at Augusta National was 21st as an amateur in 2016.  And the Masters has a way of humbling people- even US Open champions- who get a little too crazy trying to drive it deep.

Will someone make a hole in one on Sunday?
The possible answers are yes or no.

It is important to keep in mind that we’re basically dealing with one hole in this discussion- the 16th which had two holes in one last year – DeChambeau and Justin Thomas. There have been 18 hole in ones at 16- nine of them coming in the last decade. The other par 3s on the course? Just nine and not one since 2013.

Which of these golfers will have the lowest single round score for the tournament?
The choices are Tiger Woods, Brooks Koepka, Tony Finau, Rory McIlroy, Jason Day or tie.

The safest bet here is Koepka, who has major championship experience and remember that he finished tied for second last year behind Woods. He has been getting healthier. And while it is realistic to think that any of the names listed could win the tournament- Woods could be a stretch, but you have to respect his past at Augusta- Koepka seems ready to take the next step.

Which of these golfers will have the lowest overall score for the tournament?
The answers are Bryson DeChambeau or Dustin Johnson.

Again, the stylish pick would be DeChambeau, who made Winged Foot look take in claiming the US Open in September. But Johnson finished second at Houston last week, sixth at the US Open and two first place finishes at the FedEx Cup playoffs. He has four straight Top 10 finishes at Augusta, but hasn’t brought the ultimate prize home. This may be DJ’s best shot.

Make your six choices with FOX Super 6 and you could win the ten grand jackpot prize.