Now having a quarterback like Tom Brady, who has won more Super Bowls than any other single player in the history of the league, Tampa Bay head coach Bruce Arians is planning to have the last laugh by the end of the season.

LOS ANGELES - Tom Brady’s week 1 match up against Drew Brees was the kind of NFL face-off that will have fans of the sport saying decades from now, “I remember where I was when that happened.”

The historic clash pitted the most statistically accomplished quarterbacks against each other in an epic battle that drew millions of viewers. The game, which aired on FOX Sports, hit a ratings high, and was projected to be the most-watched telecast of any kind since Super Bowl LIV, according to Nielsen Media Research.

For Brees and Brady, the unicorn of a game was precisely 21 years in the making.

"It makes me remember back to 1999 when we played against each other in college," Brees said in a press release from the New Orleans Saints. "The (Purdue) Boilermakers traveled up to the Big House (Michigan Stadium). Unfortunately, that one didn't end too well for us, but I think, little did we know, we would have the opportunities that we've had in the NFL."

And while Brees may be in disbelief that the two legends of the sports continued on for so long to eventually give America a football convergence that will be talked about for years to come, the Saints’ regular-season opener against Tampa Bay Sunday certainly gave the entire country a double-take.

That’s because 43-year-old Tom Brady, who after 20 seasons with the New England Patriots and the most Super Bowl wins in the history of the game (6), left his longtime comrades to play for a team with the worst winning percentage among active franchises.

Brady, who comes in second on the all-time lists in passing yards (74,571) and passing touchdowns (541) threw two interceptions in his Tampa Bay debut. But Alvin Kamara scored touchdowns running and receiving, and the New Orleans Saints beat the Buccaneers 34-23 on Sunday. 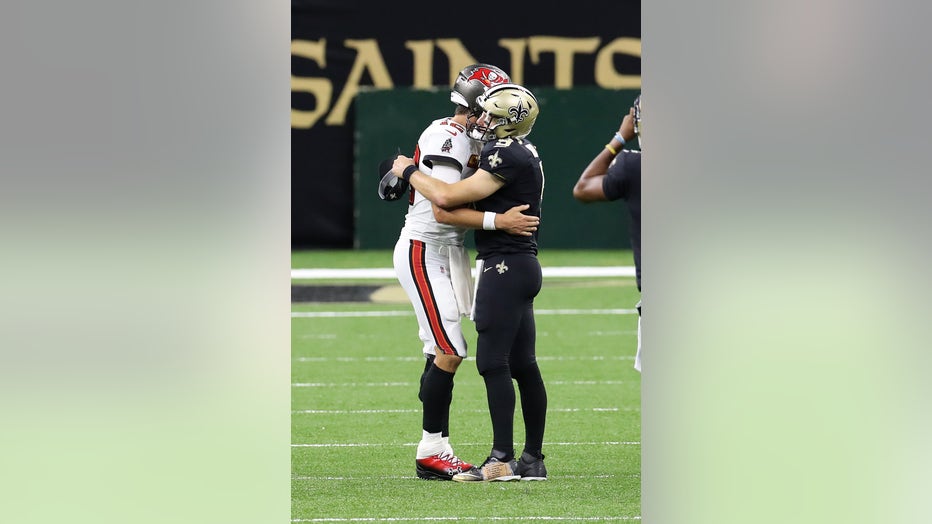 With an addition like Brady, Buccaneers’ head coach Bruce Arians hoped to show off the Florida dream team to create an NFL season debut like no other.

But neither quarterback was statistically exceptional in the blockbuster NFL game featuring two quarterbacks in their 40s.

Brees passed for 160 yards and two TDs, but he also avoided critical mistakes. He did not turn over the ball and took only one sack. His first TD pass was a dump-off to Kamara from 12 yards. In the fourth quarter, he hit free-agent signing Emmanuel Sanders for a five-yard score.

Fans still got to witness not just Tampa Bay’s dream team, but a dream game from their television screens.

But few got the chance to actually witness the historically significant quarterback match-up in person, with government officials and the Saints having agreed that no fans should attend the opener amid the coronavirus pandemic.

That turned the normally deafening 73,000-seat Superdome into more of an echo chamber. When Wil Lutz’s field goal put New Orleans up 17-7, the squeaking of pulleys could be heard across the stadium as the net behind the goal post was lowered.