SAITAMA, Japan (AP) - The Americans rebounded from their opening loss with a 6-1 rout of New Zealand in front of the First Lady on Saturday in the women's soccer tournament at the Tokyo Olympics.

With the United States leading 2-0 at the break, Jill Biden arrived in time to watch the team put the game away in the second half at Saitama Stadium.

The United States was stunned by Sweden in the first match, losing 3-0. It was the team's first loss since January 2019, and snapped a 44-game unbeaten streak. The Americans had not been held scoreless since 2017.

But the Americans vowed to regain control of the tournament. Defender Kelley O'Hara said the United States needed to be "ruthless" against New Zealand.

RELATED: Tokyo Olympics: Who to watch on Team USA

And ruthless they were.

Rose Lavelle scored off a well-placed pass from Tobin Heath in the ninth minute to give the United States an early lead — and the team's first goal of the Olympics. Despite the lack of goals, the Americans dominated the half, unlike their out-of-sorts start against the Swedes.

Lindsey Horan scored with a header in the final moments of the half to put the United States up 2-0 at the break. It was Horan's 23rd international goal and it came on her milestone 100th appearance for the national team.

It could have been worse for New Zealand but the United States had four disallowed goals, all for offside, in the first half.

An own-goal by Abby Erceg extended the U.S. lead to 3-0 in the 64th. New Zealand avoided the shutout with Betsy Hassett's goal in the 72nd. 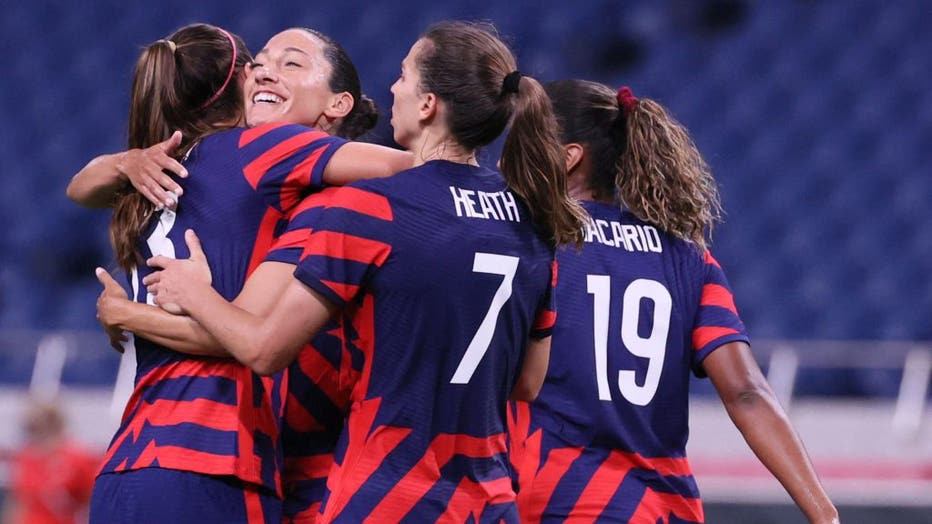 USA's forward Alex Morgan (L) celebrates with teammates after scoring the fifth goal during the Tokyo 2020 Olympic Games women's group G first round football match between New Zealand and USA at the Saitama Stadium in Saitama on July 24, 2021. (Photo

Christen Press, who came in as a second-half substitute, scored from the center of the box in the 80th off a feed from Julie Ertz, before Alex Morgan scored in the final minutes of regulation. Another New Zealand own-goal closed out the game in stoppage time.

The United States, the reigning World Cup champion, has been to every Olympics since women's soccer joined the event in 1996. The world's top-ranked team has five gold medals, more than any other nation.

Their nemesis at the Olympics has been Sweden, which booted the Americans from the Rio de Janeiro Games in the quarterfinals five years ago.

New Zealand lost to Australia 2-1 in its opening match and the Ferns' chances of reaching the knockout round grew slim with Saturday's loss.

New Zealand, coached by former U.S. coach Tom Sermanni, had not played any matches since March 2020 because of coronavirus restrictions.