The Texas Rangers will allow for 100% capacity of fans for their Opening Day game at Globe Life Field, becoming the first team in the four major North American leagues to allow full attendance at games.

ARLINGTON, Texas - The Texas Rangers will allow for 100% capacity of fans for their Opening Day game at Globe Life Field, becoming the first team in the four major North American leagues to allow full attendance at games.

This comes after Governor Greg Abbott reopened the state and took away reopening restrictions.

The Rangers' home opener against Toronto on Monday, April 5, will be at full capacity, 40,518. But there will be "distanced seating" sections at the ballpark for all other games in April.

The Rangers said this decision was made after the governor’s office gave clearance for them to fully open Globe Life Field.

Fans attending games will be required to wear a face covering, and other protocols will be in place. There will be hand sanitizing stations throughout the ballpark, and the all tickets will be digital and credit cards will only be accepted at the concessions and other shops.

After the Rangers played all 30 of their home games during the shortened 2020 season without fans, MLB allowed about 28% capacity at the retractable-roof stadium for the National League Championship Series and World Series that were played there exclusively. Abbott was on hand for the World Series opener, where he got to deliver the "Play Ball!" message before a crowd of 11,388. 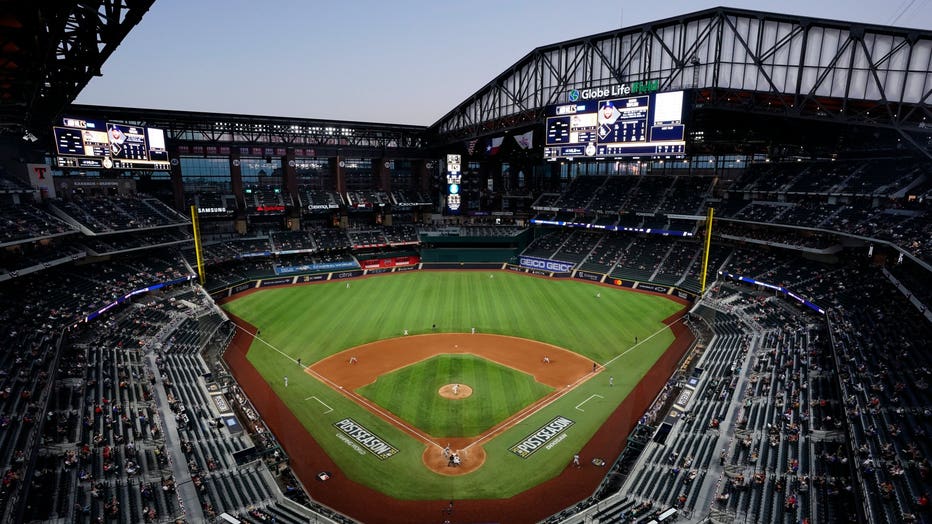 Some public health experts said the move is worrisome.

The Rangers own plan appears to acknowledge people might have concerns, as they plan to offer some socially distanced seating sections, but just not on Opening Day.

The only members of the public inside Globe Life Field in recent days have been those lining up to get vaccinated.

Those inside the ballpark were socially distanced, but soon, that’s about to change.

After going without fans during last year’s inaugural season at the new ballpark, the Rangers announced they’ll not only welcome fans in this season, but they’ll open at 100% capacity for their home opener.

"Having fans back is going to be indescribable, the stadium is going to feel different," Rangers outfielder Joey Gallo said. "To have fans, that’s why we play the game, so I’m very excited to have fans back again. It just wasn’t the same last year without fans."

Globe Life Field has hosted people during the pandemic, from high school graduations to the World Series.

But even those events were limited to roughly a quarter the max capacity, with people spaced out in pods.

The National Finals Rodeo also drew large crowds for its nine-day event, though rodeo officials did not share audience numbers.

"I think it’s worrisome," he said. "I think it’s risky right now. I hope it doesn’t set us back. I think the good news overall is that we’re seeing such good progress, I just would hate to see it erode away from us right here at what seems to be the end of our current peak."

FOX 4 asked the Rangers if the organization consulted local health officials about opening to full capacity.

A spokesperson did not directly answer the question: "Since May of 2020, the Rangers have been following CDC guidance and working closely with local public health officials to create and implement best practices to allow for the safe return of fans to both Globe Life Field and Globe Life Park."

Dr. Carlo said people will have to weigh their own risk level before deciding whether to go, with the risk level at the ballpark hard to predict.

"Can you effectively wear a mask, maintain six-feet of social distance, can you enjoy a game while in those conditions? I think it would be very hard, you certainly can’t eat, drink when you have a mask on and do a lot of the things that you do at a baseball game, so I think it’s a tough call," Dr. Carlo said.

The Rangers are still working on what the socially distanced seating sections will look like after their home opener.

A spokesperson for the team said the total number of seats will depend on what sort of demand there is for those socially distanced seats.

Limited number of tickets to go on sale for World Series, NLCS at Globe Life Field