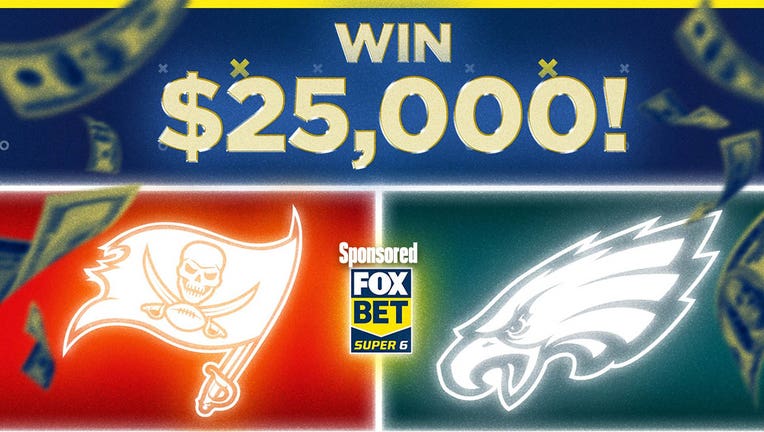 The Buccaneers take on the Eagles on Thursday Night Football, and you can win big with FOX Super 6! Here's how.

Tom Brady gets a reaction in whatever town he visits. One of the biggest reactions that he gets comes from Philadelphia.

For his part, Brady has made it known that the loss to Nick Foles in Minneapolis — in which he passed for more than 500 yards — was among the toughest of his career.

Brady returns to Philly this week, as the Tampa Bay Buccaneers arrive at Lincoln Financial Field to face the Eagles, now led by Jalen Hurts and Nick Sirianni, on Thursday Night Football (8:15 p.m. ET, FOX). And you could win $25,000 with the Thursday Night Football challenge on FOX’s Super 6. Select the correct answer to all six questions on the free Fox Super 6 app, and you could win the grand-prize jackpot. It’s quick, fun and free to play.

Here are the questions for Thursday night.

The Eagles are a strange bunch because they have a ton of weapons but none that particularly stands out. Hurts and Smith have seemed to develop nice chemistry, but Zach Ertz has also been a big factor in the red zone. Meanwhile, the Bucs have the two stud wideouts but will be without Rob Gronkowski again Thursday. Because of the X-factors here, we’re going off the board.

Which team will have the most rushing yards, and how many will it have?
The options: Bucs, Eagles, tie with ranges from zero to 161+

Philadelphia fans want to know: "Why don’t the Eagles run the ball more?" Sirianni’s offense averages 116.4 yards rushing per game, but a lot of that is Hurts running out of the RPO.  The yards are there, but they are hidden because Sanders doesn’t touch the ball that much. Meanwhile, Tampa Bay has run for just 410 rushing yards through five games.

Which team will have the most passing yards, and how many will it have?
The options: Bucs, Eagles, tie with ranges from zero to 376+

The Bucs' offense can throw the ball with the best of them. The team's 1,808 yards passing are the most in the league. Having the weapons in Evans, Godwin, Antonio Brown and Gronk when he’s there has given Brady multiple tools. The Eagles have gotten better with Smith and Quez Watkins at wide receiver, but they won’t have Dallas Goedert (COVID protocols) for Thursday. In other words, they aren’t the Bucs.

Which team will have the longest completion, and how many yards will it be?
The options: Bucs, Eagles, tie with ranges from zero to 61+

The longest pass play in the NFL this year? That was Hurts to Watkins for 91 yards in Week 2 against the 49ers. The Bucs' longest is 62 yards. The difference? Tampa’s pass resulted in a score. The Eagles were stuffed at the 4-yard line and didn’t get anything out of it due to a poor man’s imitation of the Philly Special. Also, Philly is vulnerable to the deep ball with some questionable safety play that Brady can exploit.

Which team will have the most total offensive yards, and how many will it have?
The options: Bucs, Eagles, tie with ranges from zero to 501+

Philadelphia is sneaky-good in this range because it has the run-pass option, which adds some running yards. Also, the Eagles have been playing from behind a ton, and Tampa Bay’s defense is not that great. In a game of catch-up, the Eagles get plenty of empty-calorie yards.

Who will win, and by how many points?
The options: Bucs, Eagles, tie with ranges from one to 17+ points

The wise guys in the desert have the Bucs as roughly six-point favorites to win Thursday night. The Eagles, for what it's worth, have won seven straight Thursday night games. Something has to give. In that case, take the team with Tom Brady.

Download the FOX Super 6 app now to predict the outcomes of the biggest events in sports, and you could win thousands of dollars absolutely for free each and every week. Just download and play!