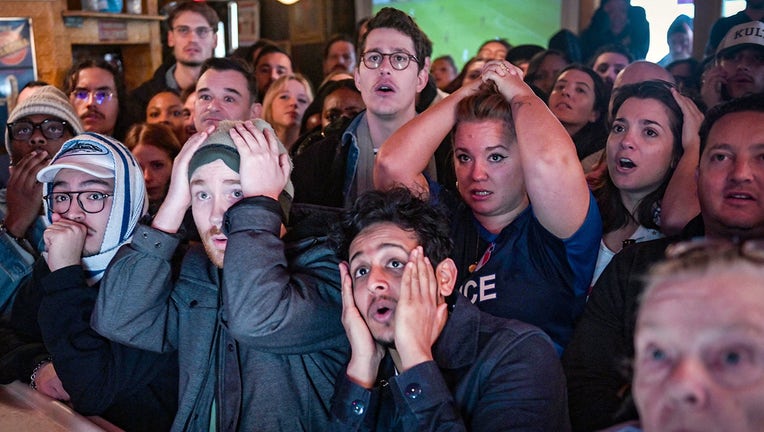 Fans react as they watch the Qatar 2022 World Cup Final football match between Argentina and France at Bar Tabac in Brooklyn, New York, on December 18, 2022. (Photo by ANDREA RENAULT/AFP via Getty Images)

Argentina’s dramatic victory over France in penalty kicks in the World Cup final has become the most-watched soccer match of any kind in the United States.

With Nielsen and Fox releasing the "match only" rating on Wednesday, Sunday's match had an English- and Spanish-language total combined audience of 26,726,000. The numbers include 4.24 million that watched via streaming.

The updated total narrowly edges the 26.7 million that tuned in to the 2015 Women’s World Cup final, when the U.S. beat Japan 5-2 in a match that aired in prime time for most of the United States because the tournament was held in Canada.

The previous high for a men's World Cup match in the U.S. was 26.5 million for the 2014 final between Germany and Argentina, which was on ABC and Univision.

Sunday’s combined audience was a 33.3% increase over the 2018 final, which averaged 17.83 million on Fox and Telemundo. Fox’s audience increased 29.5% from four years ago, when France defeated Croatia.

Telemundo’s total audience of 9 million is a 65% jump from 2018. Nearly one-third — 2.96 million — streamed Sunday’s match on Peacock and Telemundo’s digital services, which made it the most-streamed World Cup match in U.S. history, regardless of language.

By comparison, the 6.04 million who watched on Telemundo was triple the 1.9 million that watched the network’s broadcast of Super Bowl 56 earlier this year.

RELATED: Was Argentina-France the best World Cup final ever? Ranking the 5 best

Despite the World Cup being held in the fall and competing against college football and the NFL, Fox and Telemundo reported double-digit increase for their tournament coverage.

Fox averaged 3.59 million throughout the 64 matches, a 30% jump from four years ago in Russia, when the U.S. did not qualify for the tournament.

The high viewership comes as the U.S., Canada and Mexico are set to host the 2026 World Cup.

While the Super Bowl continues to lead championship viewing — this year’s game had a combined audience of 112.3 million — the World Cup final did outdraw other sports. Game 5 of the World Series between the Philadelphia Phillies and Houston Astros averaged 12.77 million on Fox, and was the most-viewed game of the six-game series. The series-clinching games of the NBA Finals and NHL’s Stanley Cup finals averaged 13.99 million and 5.8 million, respectively, on ABC.

Editor's note: This station is owned by FOX.