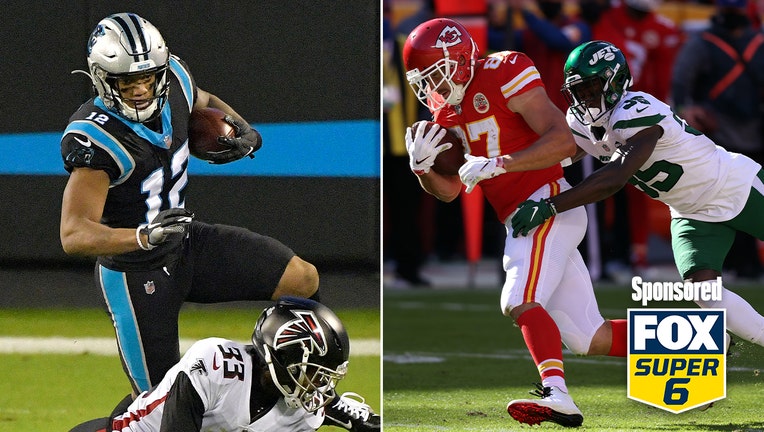 LEFT: D.J. Moore #12 of the Carolina Panthers runs against Blidi Wreh-Wilson #33 of the Atlanta Falcons during the fourth quarter at Bank of America Stadium on October 29, 2020 in Charlotte, North Carolina. (Photo by Grant Halverson/Getty Images) RIG

Another week in the NFL, another chance to become a millionaire with FOX Super 6.

Nobody picked a winner of all six games of FOX’s Super 6 contest, meaning a rollover for another week of the $1 million jackpot.

How do you win? Well, just pick the winners and the margins of victory of the six games listed on the FOX Super 6 app. Get them all right and you will take home part of the grand prize jackpot of $1 million. (The jackpot will be split among all those who get every game and margin of victory correct.)

Even if nobody correctly picks the winner and margin for all six games, those who come the closest will be eligible for the $10,000 guaranteed prize which will be handed out.

The best part of all is it’s free. To play, all you have to do is go to the FOX Super 6 app on your phone or tablet device. When you click on the app, you will see the entry for the NFL Sunday Challenge. Just go onto the app, swipe for the team that you think will win and the margin of victory.

Here’s the six games to pick for this coming week.

The Chiefs, reigning Super Bowl champions, have been - with the exception of a stumble against the Raiders back in Week 5 - the same old Patrick Mahomes juggernaut that has rolled for the last few years with 418 yards per game and 31.6 points per game offensively. Meanwhile, the Panthers could get Christian McCaffrey back as their main offensive weapon.

Can the Panthers pull the upset? Make your pick on the FOX Super 6 for free and it could lead to $1 million

Suddenly, these two teams are starting to look vulnerable after hot starts with two-game losing streaks. The Titans loss at Cincinnati last week came as a result of the Tennessee defense not being able to get off the field- the Bengals were 10 of 15 on 3rd down conversions and had 35 minutes of possession time. Meanwhile, the Bears offense didn’t wake up quickly enough to avoid a 26-23 loss to the Saints in overtime. The loser of this game is in a free fall.

Two division leaders clash in upstate New York, where Russell Wilson and Josh Allen will lead diverse offensive attacks against one another. The Seahawks bounced back from a loss to Arizona for a 37-27 win over the 49ers as Wilson continues to make his case for MVP. Meanwhile, Allen and the Bills helped dash any chances of the Patriots rallying for another AFC East title with a 24-21 win at home.

The Giants are the masters of the near-miss with their last four losses all coming in one-possession games. That included Monday night’s 25-23 loss to the Buccaneers. Daniel Jones has thrown nine interceptions and must protect the football better. Meanwhile, Washington is coming off a bye week that followed a blowout win over Dallas. Kyle Allen will once again be under center for the Football Team.

The Ravens couldn’t close the deal last week in a 28-24 loss to the undefeated Steelers last Sunday as Lamar Jackson was under 50 percent passing and threw two interceptions. Meanwhile, the Colts are the quietest 5-2 team in the league but they continue to find ways to win like they did last week in Detroit. Phillip Rivers may not be the San Diego version that played at a Hall of Fame level, but he’s been solid enough to get the job done.

Act II of Brees vs. Brady takes place in prime time on Florida’s Gulf Coast. Both teams survived near-misses last week; the Saints winning in overtime over the Bears, the Bucs edging the Giants on the road. In the first meeting - a 34-23 Saints win in Week 1 - saw Tom Brady throw two interceptions and struggle to get on page with his new teammates. That hasn’t been the same problem since then as Brady has found comfort with his wide receivers and now gets Antonio Brown added into the mix for the first time.

It’s a big game for both teams and it could be a huge game for you on the FOX Super 6 app. If you pick that game and five others correctly, you could win $1 million. It’s free to play, so download today at the App Store or Google Play.