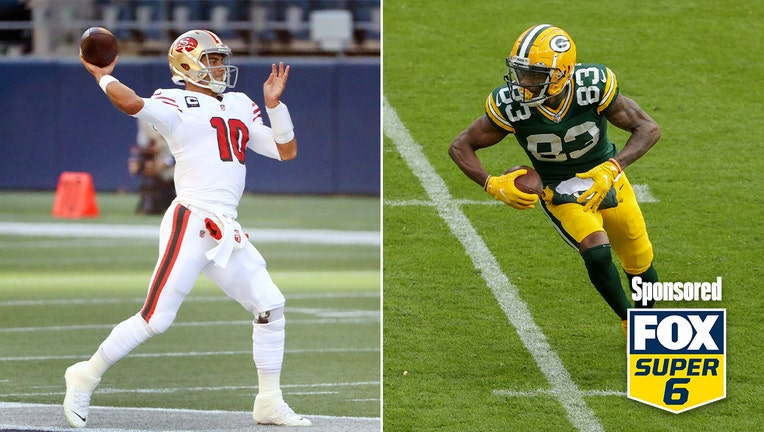 LEFT: Jimmy Garoppolo #10 of the San Francisco 49ers looks to throw the ball in the first quarter against the Seattle Seahawks at CenturyLink Field on November 01, 2020 in Seattle, Washington. (Photo by Abbie Parr/Getty Images) RIGHT: Marquez Valdes-

Aaron Rodgers grew up in the San Francisco Bay Area as a 49ers fan. And each time that the Green Bay Packers quarterback heads home, it becomes a big event.

But not every trip for Rodgers in the Packers to Northern California has been positive. In fact, his two trips to Levi’s Stadium last year were downright miserable – including a game that cost Green Bay a chance at Super Bowl LIV.

But the 49ers team that beat Rodgers down last year is an injury-riddled shell of itself. And when the two sides clash on NFL Thursday Night Football on FOX (8:20 p.m. kickoff), the Packers will be the team trying to take a step towards NFC supremacy.

Nick Mullins will start at quarterback for the 49ers after Jimmy Garoppolo was sidelined with a knee injury. He will be missing his two biggest weapons on the outside in tight end George Kiddle and wide out Deebo Samuel, both gone with foot injuries.

And being able to predict the big events of this game could help you win $25,000 in FOX’s Super 6 contest.  Just download the free app, answer six questions correctly and you could win up to $25,000 while watching football. It’s that simple.  Here’s the questions and how to look at it?

The Packers could be without Aaron Jones, who is listed as questionable. The 49ers won’t have Tevin Coleman and Raheem Mostert in their backfield. That almost forces more passing with both teams, with the lack of urgency of establishing the run evident. A high number is possible here.

Again, one of the biggest things to keep in mind here is the lack of a potential rushing attack for these teams due to the injury factor on both sides, especially with the short week. Both teams can put points up, so that would take the no touchdowns out of the question.

How many total sacks, interceptions and fumbles will there be in the game?
The choices range everywhere in between from 0-4, 5, 6, 7, 8 or 9+.

Both teams are about the same in sacks – Packers 16, 49ers 14- and are around the middle of the pack in fumbles recovered. However, Green Bay has only recorded two interceptions this season – among the lowest totals in the NFL. The 49ers have eight – tied for ninth in the league. It would seem likely that a low to middle number would work better.

How different players will score a touchdown in the game?
The options are 0, 1-2, 3, 4, 5 or 6.  With the amount of skill positioned players being injured for both sides- especially for San Francisco- expect that the load could get spread out offensively. It should be noted that both quarterbacks are capable of running it in themselves near the goal line.

It’s tough to get a read on it because both the San Francisco and Green Bay offenses are so beat up with injuries. Having Davonte Adams gives the Packers the one weapon that the 49ers don’t have at this point. It is doubtful that the game breaks into the high 50s and the 60s given all of those injury issues.

Choose team to win & by how many points

Flat out: all signs in this game points towards a Packers win and potentially big. Rodgers certainly has more weapons at his disposal and could find ways of exploiting the gaps in the 49ers defense- which did not do a good job last week against the Seahawks and Russell Wilson. Green Bay will need this to continue to have a grip on the NFC North lead. Meanwhile, all the injuries and a short week will create major problems for the 49ers. Stranger things have happened, but this has Green Bay written all over it.

You can catch up the $25,000 if you are able to win Thursday’s Super 6 jackpot. Don’t forget to download the FOX Super 6 app and take your chance at winning a chunk of Terry Bradshaw’s money.