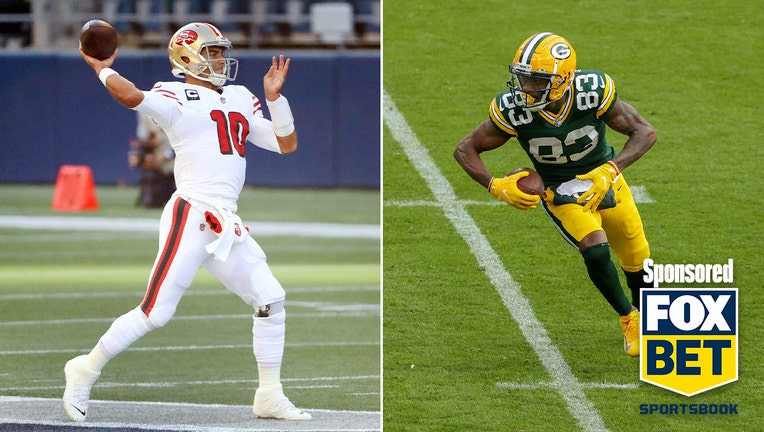 LEFT: Jimmy Garoppolo #10 of the San Francisco 49ers looks to throw the ball in the first quarter against the Seattle Seahawks at CenturyLink Field on November 01, 2020 in Seattle, Washington. (Photo by Abbie Parr/Getty Images) RIGHT: Marquez Valdes-

When Aaron Rodgers walked off the Levi’s Stadium field last January after another loss in the NFC Championship game, it felt like the difference between the Green Bay Packers and San Francisco 49ers was a wide gap.

Eleven months later, the two teams are still separated – but in an almost completely different way than anyone could have anticipated.

It’s Rodgers and the Packers that still have Super Bowl dreams on their mind as they travel to Santa Clara to face the injury riddled 49ers for this week’s edition of Thursday Night Football (8:20 p.m., FOX).

Green Bay will look to bounce back from a stunning 28-22 loss to the Minnesota Vikings last Sunday at Lambeau Field. Meanwhile, the 49ers lost both quarterback Jimmy Garoppolo and tight end George Kittle to injuries during a 37-27 loss at Seattle.

And you can place a wager on the action with a bet on FOXBet.com – the best place to find the latest odds, prop bets and bet boosts. Check it out now for special promotions when you open an account. FOX Bet is available in Pennsylvania, New Jersey and Colorado through the Fox Bet app and online at FOXBet.com.

There are plenty of prop bets and Bet Boosts on FOXBet.com. One item to keep an eye on is a bet that Packers WR Davonte Adams will score a fourth quarter touchdown. That Bet Boost is +450.

Green Bay leads the series 36-32-1 after 69 meetings. However, San Francisco won both games last year between the two teams – both in convincing fashion. The 49ers rolled over the Packers 37-8 in the regular season, then followed that up with a 37-20 win in the NFC Championship game that sent the 49ers to Super Bowl LIV. Since Rodgers became the Packers starting quarterback in 2009, he is 4-3 against the 49ers in seven starts with 14 touchdowns, two interceptions and a 101.5 quarterback rating.

The Packers offense looked a tick off in Sunday’s loss to the Vikings, which was played on a windy, cold afternoon at Lambeau. The bigger problem for Green Bay, however, was the lack of answers for Minnesota running back Dalvin Cook, who scored four times (three rushing, one receiving) and rushed for 163 yards. The good news for the Packers is there will likely be no Tevin Coleman for San Francisco due to Coleman’s knee injury. That’s in addition to Raheem Mostert, who burned the Packers last year in the NFC Championship game.

Meanwhile, the 49ers are likely going to start Nick Mullins in place of Garoppolo. He will be without Deebo Samuel and Kittle – arguably the two best pass catchers- because of foot fractures. San Francisco’s defense will need to step up and give the offense a ton of short fields. It may be a lot to ask against a Rodgers looking for revenge and to step up after last week’s disappointment.

Those are among the many things to look for on the FOX Bet app, where you can find several promotions when you open your account.