High-profile injuries in the 2020 NFL season

Here's a look at some of the high-profile injuries suffered by NFL stars in the 2020 season.

CLEVELAND (AP) - Odell Beckham Jr. was in a much better place emotionally and physically. This was going to be the season he changed minds.

He was determined to make 2020 — and its many obstacles — a special year, re-establish himself as one of the NFL's best players and lead the Browns back to the playoffs, along with with best friend and teammate Jarvis Landry.

Beckham won't get the chance.

The star receiver's second season with Cleveland ended on Monday after an MRI confirmed he sustained a torn left knee ligament in the opening minutes of Sunday's 37-34 win over the Cincinnati Bengals.

Beckham's injury is a devastating personal blow and a potentially major setback to the Browns, who are off to their best start since 1994 and eyeing their first postseason appearance in 18 years.

They'll have to get there without Beckham.

The three-time Pro Bowler got hurt when his left leg buckled while he was trying to make a tackle after Baker Mayfield's first pass was intercepted by Bengals cornerback Darius Phillips. 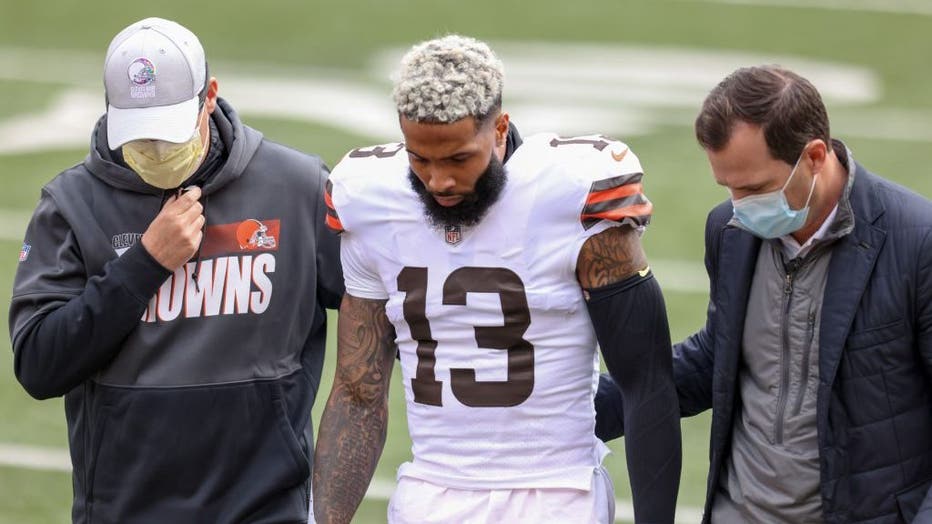 Odell Beckham Jr. No. 13 of the Cleveland Browns walks off the field in the game against the Cincinnati Bengals at Paul Brown Stadium on Oct. 25, 2020 in Cincinnati, Ohio. (Photo by Justin Casterline/Getty Images)

An MRI taken Monday in Cleveland confirmed the diagnosis of the torn ACL, an injury that typically requires nine months to one year of recovery time. The team said Beckham will be placed on injured reserve, but Stefanski did not have a timetable on when he will have surgery.

On what became his final play of 2020, Beckham, who was slowed last season by a core muscle injury, was chasing Phillips down the sideline when his leg got twisted awkwardly. He immediately grabbed it, was taken directly to the locker room and didn’t return.

The Browns (5-2) played well without Beckham, who for all his talent hasn't been able to make a strong connection with Mayfield since arriving in a blockbuster trade from the New York Giants before last season. The three-time Pro Bowler played most of 2019 with an injury that required offseason surgery.

Mayfield was also without injured running back Nick Chubb, tight end Austin Hooper and Landry played with a broken rib. But the third-year QB had one of his best games by making plays with rookie tight end Harrison Bryant (two TDs), Rashard Higgins (six catches) and rookie receiver Donovan Peoples-Jones, who entered the game without a catch and grabbed Mayfield's winning TD pass with 11 seconds left

Cleveland, which hasn't made the postseason since 2002, will have to go the rest of the way without Beckham, who turns 28 on Nov. 5. He had 23 catches for 319 yards and three touchdowns this season and scored on a 50-yard touchdown run.

Beckham's presence alone made defenses account for him on every snap.

"It’s not easy. I don’t want to have to do it and I’m very disappointed for Odell, but that’s the nature of this beast. Injuries are part of this thing and that doesn’t mean any of us have to like it, but we do have to deal with it.”

While Beckham had continued to make some headlines with off-the-field antics, he had been emerging as a leader on the Browns. He was healthier than he had been in several years and showing some of the breakaway speed that made him so dangerous with the Giants.

The torn ACL is the latest injury for Beckham, who was the AP's Offensive Rookie of the Year in 2014 after being drafted with the No. 12 overall pick by New York. He made the Pro Bowl in his first three seasons, but was limited to four games in 2017 with a broken ankle and 12 games in 2018 with a bruised quadriceps.