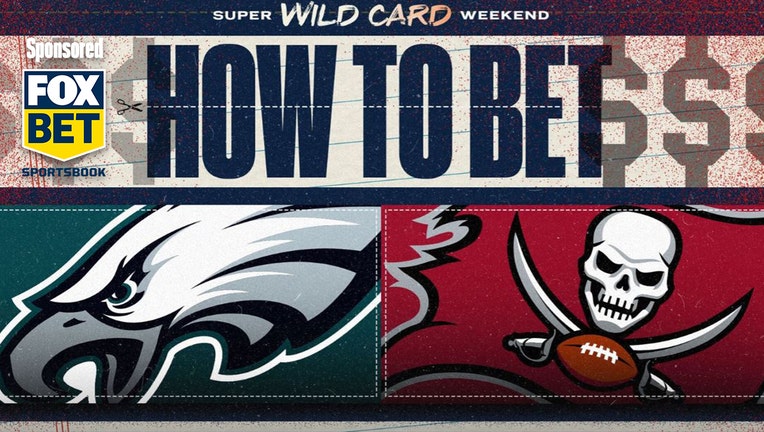 Check out the NFL odds on Eagles vs. Buccaneers, from the point spread to the over/under and expert picks.

It'll be ground vs. air when the Philadelphia Eagles (9-8) play at the Tampa Bay Buccaneers (13-4) on Sunday in the NFL's Super Wild Card Weekend.

Here's everything you need to know about the NFL odds for Sunday's matchup between the Eagles and Buccaneers — the point spread, moneyline, total over/under and picks from our betting experts (with all NFL odds via FOX Bet).

The Eagles are 8-8-1 against the spread (ATS) this season. The Buccaneers are 9-8 ATS this season.

"The Bucs do a good job of defending what Philadelphia does well, running the ball. So Tampa Bay should win this game. But, Jalen Hurts should be healthy and they are capable of making this game uncomfortable for the Bucs. Similar to what Washington did last year against Tampa Bay. The WFT's pass rush made it uncomfortable for Tom Brady in that game."

This will be the fifth playoff meeting between the teams. They split the first four games.

Sanders has missed the past two games with a broken hand but coach Nick Sirianni said he is "hopeful" Sanders will play.

Linebacker Alex Singleton is tied for 11th in the NFL with 137 tackles.

"Philadelphia has earned my respect and they should keep it close," Cowherd said. "I think I would wait closer to the game just to see who is in for the Eagles. If Philadelphia can get all their COVID-19 list guys back, then they should be good."

Brady, in search of his eighth Super Bowl title, leads the NFL in passing at age 44.

The Buccaneers were dealt a blow when leading receiver Chris Godwin suffered a season-ending torn ACL on Dec. 19.

Running back Leonard Fournette has 812 rushing yards and eight touchdowns to go with 69 catches for 454 yards and two scores.

A key could be the battle up front. Tampa Bay has given up the fewest sacks this season (23) and Philadelphia has 29 sacks, second-lowest in the NFL.

The all-time series between the teams is tied 10-10, with the Buccaneers winning the past three games.