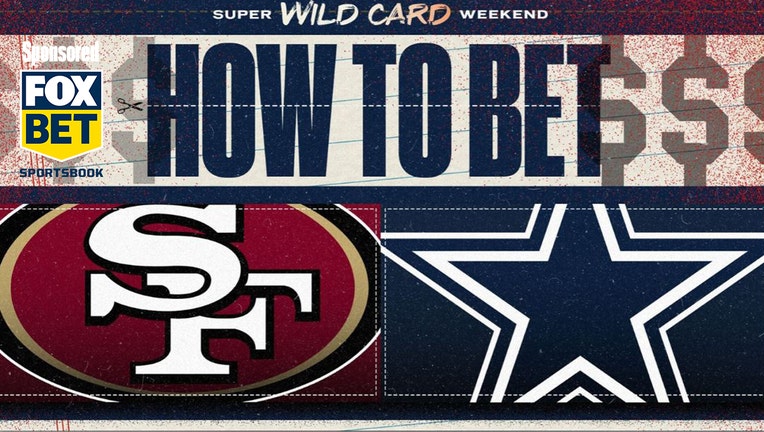 Check out the NFL odds on 49ers vs. Cowboys, from the point spread to the over/under and expert picks.

The San Francisco 49ers (10-7) and Dallas Cowboys (12-5) have each won the Super Bowl five times as the storied franchises will meet Sunday in the Super Wild Card Weekend.

Here's everything you need to know about the NFL odds for Sunday's matchup between the 49ers and Cowboys — the point spread, moneyline, total over/under and picks from our betting experts (with all NFL odds via FOX Bet).

"I like San Francisco plus the points. They are a very physical team. Jimmy Garoppolo as a starter is what, 32-14? They're healthy again and Deebo Samuel is a major matchup issue for everybody.

"Dallas was 6-0 against the NFC East, but 6-5 against everyone else. A lot of their wins this season were against average quarterbacks and average teams."

The Cowboys own a 5-2 postseason record against the 49ers, but San Francisco beat Dallas 28-27 in the 1981 NFC Championship Game, which became known as "The Catch" for Dwight Clark catching the winning touchdown pass from Joe Montana.

This playoff matchup will be a battle between San Francisco's defense and Dallas' offense.

The 49ers rank third in the NFL for the fewest yards allowed per game (310.0). The Cowboys lead the NFL in total offense, averaging 407.0 yards per game.

San Francisco's defense is led by defensive end Nick Bosa, who is fourth in the NFL in sacks (15.5).

Another weapon in the passing game is tight end George Kittle, who has 71 catches for 910 yards (12.8 yards per catch) with six touchdowns.

Dallas cornerback Trevon Diggs leads the NFL in interceptions with 11, at least three more than everyone else.

Linebacker Micah Parsons, who was activated from the reserve/COVID-19 list, is the favorite for Defensive Rookie of the Year. Parsons has 13 sacks (sixth in the NFL), 84 tackles and three forced fumbles.

The Cowboys lead the all-time series 19-17-1, having won the past three games and six of the previous seven.