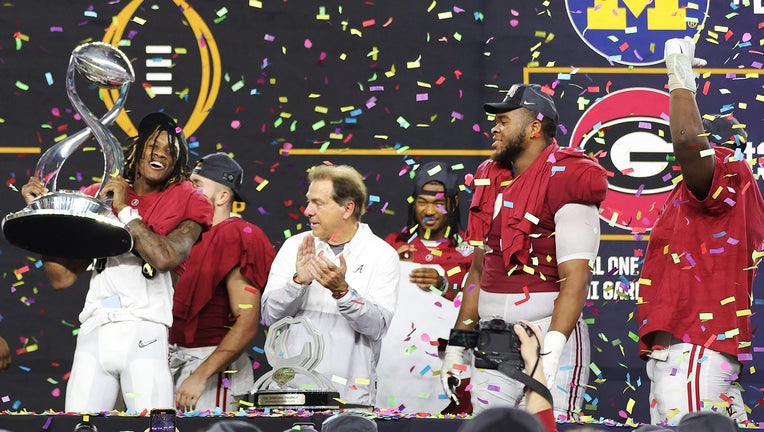 ARLINGTON, Texas - Brian Robinson Jr. ran for a career-high 204 yards and top-ranked Alabama rolled into yet another national championship game by overwhelming the first non-Power Five team to make the College Football Playoff.

Heisman Trophy winner Bryce Young threw three touchdown passes while mostly avoiding Cincinnati’s standout cornerbacks and the Crimson Tide beat the Bearcats 27-6 in the CFP semifinal at the Cotton Bowl on Friday. It was the sixth semifinal victory in a row for the Crimson Tide.

Alabama (13-1) has missed the four-team playoff only once and will try to win its second national title in a row and fourth in the eight seasons of the CFP format with coach Nick Saban. The Crimson Tide will play either No. 2 Michigan or No. 3 Georgia, the previously undefeated team Alabama beat for the SEC title, in the national title game Jan. 10 in Indianapolis.

Alabama clearly was doing what it could to minimize the impact of cornerbacks Ahmad Gardner and Coby Bryant, and pretty much succeeded with Robinson pounding on the ground and Young throwing a lot of short, safe passes — though he did find hit Ja’Core Brooks for a 44-yard catch-and-run TD on a play away from the standout defenders for a 17-3 lead just before halftime.

The Crimson Tide opened the game with 10 consecutive runs before putting three receivers opposite of Gardner, who hasn’t given up a TD in coverage in his college career. Young found Slade Bolden open in the left flat for an 8-yard TD pass that put Alabama ahead to stay.

With their own dynamic quarterback in Desmond Ridder, the NFL prospect who returned for an extra season for just this chance, the Bearcats (13-1) were the nation’s only undefeated team until facing the playoff standard bearer.

Coach Luke Fickell and Cincinnati broke through as the first non-P5 to make the four-team playoff, bolstered by a win the first Saturday of October at Notre Dame. The Fighting Irish, who lost 31-14 to Alabama in a CFP semifinal Rose Bowl played at AT&T Stadium last New Year’s Day, didn’t lose another game this season and finished fifth in the final CFP rankings behind the history-making Bearcats.

Ridder was sacked six times and outside of a 9-yard run on the opening play of the second half never got to be hurt Bama with his feet. He was 17 of 32 for 144 yards.

Young, a 20-year-old sophomore, has a chance to become the fifth Alabama quarterback in 13 seasons to win a national title as a first-year starter. He completed 17 of 28 passes for 181 yards in the playoff game, four weeks after setting an SEC championship game record with 421 yards passing in a win over Georgia and three weeks after being the first Crimson Tide QB to win a Heisman Trophy.

THORNE LEADS NO. 11 SPARTANS PAST NO. 13 PITT IN PEACH BOWL

His only interception came late in the third quarter when he overthrew All-America receiver Jameson Williams in a crowd of defenders and was picked off by Bryan Cook on the logo at midfield.

Williams was targeted eight times and had seven catches for 62 yards, the longest for 20 yards.

After Cook’s interception, the Bearcats went three-and-out for the fifth time in the game, with Ridder sacked for 10-yard loss on third down.

Cincinnati: It was only the second loss in two seasons for the Bearcats, both setbacks coming in their final games. They lost 24-21 to Georgia on a last-second field goal in the Peach Bowl last New Year’s Day. ... Cincinnati drove for field goals by Cole Smith (37 and 31 yards) on the opening drive of each half, but struggled to move the ball outside of those two drives.

Alabama: After the Tide never got on track with their running game most of the season, fifth-year senior Robinson and the rushers led them in the semifinal game with 301 yards. Trey Sanders had 14carries for 67 yards. Going into the Cotton Bowl, the Crimson Tide were averaging 147.6 yards per game, their lowest title in 15 seasons under Saban.

Cincinnati: With Ridder, "Sauce" Gardner and Bryant all wrapping up their college careers, and among more than 30 seniors that were part of this year’s team, the Bearcats will have a lot of new faces in key roles when they open their 2022 season, Sept. 3 at SEC team Arkansas.

Alabama: Its sixth national championship game in seven years, Jan. 10 in Indianapolis against No. 2 Michigan or No. 3 Georgia.