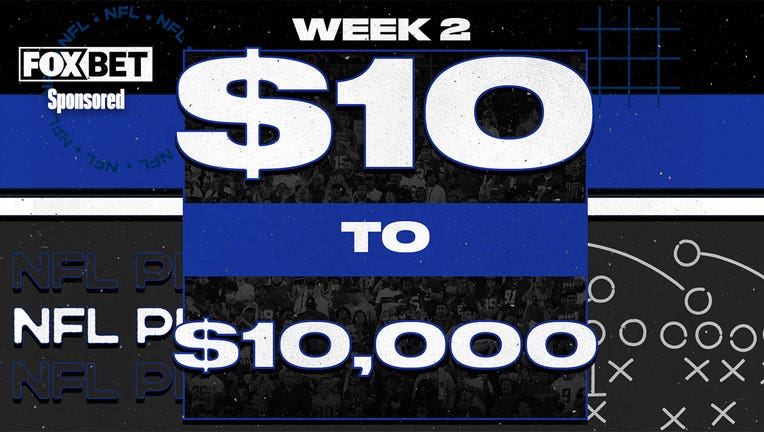 If you're even slightly familiar with sports betting, you've probably heard of a parlay.

A parlay is a bet on the outcome of multiple games where you only win if you're right on all of your picks. If you get even just one wrong, unfortunately, you lose your bet. But if you're right, your payout is increased substantially – giving you an opportunity to turn a bet of just $10 into over $10,000 or more, as one example.

Add it all up, and a parlay is a thrilling, low-risk way to have a rooting interest in many games with the potential for a lottery-sized win. And so, for those of you who are interested in taking a long shot at the end zone, we present to you the first "$10 to $10,000" NFL FOX Bet parlay.

Each week, we'll take a look at FOX Sports Betting Analyst Jason McIntyre's picks for the weekly Super 6 NFL contest, plus a few more games our gambling talent have made picks on, and combine it all into a $10 parlay that could help you score big.

To celebrate this new opportunity for sports fans to all be invested in the same parlay, we're going even bigger with a $10, 11-game bet that would win you over $12,000 at FOX Bet.

Here are the picks, with game-by-game analysis below:

(For those who haven't yet dipped their toe into the sports betting pool, the FOX Super 6 app offers something very close to a free-to-play parlay. You pick which team will win and by how many points in six games on Sunday, and if you're right, you win $1,000,000.)

Jason McIntyre: "Seattle looked like a track team running circles in the secondary around the Colts, who boasted a top 10 defense last year that was really built upon a foundation of weak opponents. The Rams possess an equally speedy fleet of receivers. Rams by a touchdown."

Jason McIntyre: "Carolina, which dominated in the trenches against the Jets (6 sacks, 6 TFL, 10 QB hits), won’t be pushed around as easily as the Packers. Their front seven is a sneaky underrated group having added Haason Reddick in free agency opposite Brian Burns. Sean Payton has won four straight against Matt Rhule, and eight of nine against the Panthers overall, but this one will be closer than a field goal."

Jason McIntyre: "Two teams coming off convincing wins on the road, although many erroneously think the 49ers ‘nearly lost’ to the Lions when in reality they were up 41-17 with 5 minutes left. San Francisco averaged a whopping 8.0 yards per play in Week 1, second only to Cleveland (8.2). The Eagles won in the trenches easily against the Falcons, something they won’t be able to do against the 49ers. 49ers by double digits."

Jason McIntyre: "I'm not even sure it’s an upset if the Bengals win, given their propensity for keeping games close with Joe Burrow. Outside of two blowout losses against the Ravens as a rookie, he’s 7-2 against the spread."

Jason McIntyre: "The Dolphins don’t have the pass rush the Steelers do, but they have a better secondary led by Xavien Howard, who likely will shadow Stefon Diggs. The key will be if Buffalo’s run defense can get off the field. Expect Miami to slow the game down with a heavy rushing attacking, hoping to wear down the Bills in the humid, 90-degree weather expected in South Florida. This will be a tight one."

Jason McIntyre: "This is a very bad situation for the Ravens, who are 0-3 against Patrick Mahomes. All he’s done in September in his career is go 11-0 with 35 TDs and 0 interceptions. The Ravens blitz at one of the highest rates in the league under Wink Martindale; it’s common knowledge you absolutely cannot blitz Mahomes because of his accuracy and vision. Chiefs by a LOT."

Sam Panayotovich: "Now that everybody is off the Jags bandwagon, I’m ready to drive it. I loved the brilliance that Trevor Lawrence showed in the second half and think he’s in for a much better performance at home in the heat. The Broncos are playing their second straight game a long way from home and their stock is too high right now. They were a 3-point favorite on the lookahead line, and now the market is painted with sixes. Denver is also without their best receiver, Jerry Jeudy. A three-point move is not justified."

Jason McIntyre: "The Raiders are fresh off an exciting overtime win on Monday night against the Ravens, which is why this is an easy spot to fade the jubilant team. As for the Steelers, favored by 6.5 here feels high, but the matchup in the trenches is terrible for the Raiders, as they may be down two starting offensive linemen."

Jason McIntyre: "Minnesota has numerous problems. To start with, the team had nine new starters from Week 1 of last year. The Vikings defense gave up 127 yards rushing to Joe Mixon and committed 12 penalties. Minnesota also has issues on their offensive line, as they gave up 3 sacks to Cincinnati; Chandler Jones and JJ Watt could be in line for monster games.

"About the only thing working in Minnesota's favor – besides 'they won't play that badly again' – is that Mike Zimmer is 30-15 ATS off a loss. That is, if he doesn't lose the locker room first."

Sam Panayotovich: "Betting against the Chargers when they're a home favorite has been a professional angle for some time. I know guys that have made lots of money over the years fading coaches Norv Turner, Mike McCoy, and Anthony Lynn as short California chalk.

"The truth is, I do like new Bolts head coach Brandon Staley a lot, so this isn't just a straight fade. It's more about taking that explosive Dallas offense with three extra days of rest. Dak Prescott and the Cowboys' offense showed me a lot on opening night in Tampa, and I'll gladly take the full field goal in what should be a coin flip game."

Geoff Schwartz: "Seattle's defensive line sacked Carson Wentz three times, plus pressuring him another 10 opportunities last weekend. Look for more of the same in this game. And the fans are back in the stands. Let's keep it real. Playing in Seattle is a pain in the ass. It's freaking loud. And the worse you play, the louder the stadium gets.

"Lumen Field will be rocking as the Seahawks win this going away."

For more NFL Week 2 betting analysis, click here for updating odds and picks for each game, and check out the all new FOX Sports "Odds" section for the day's most-bet games, analysis, data, gambling-centric schedules and more.