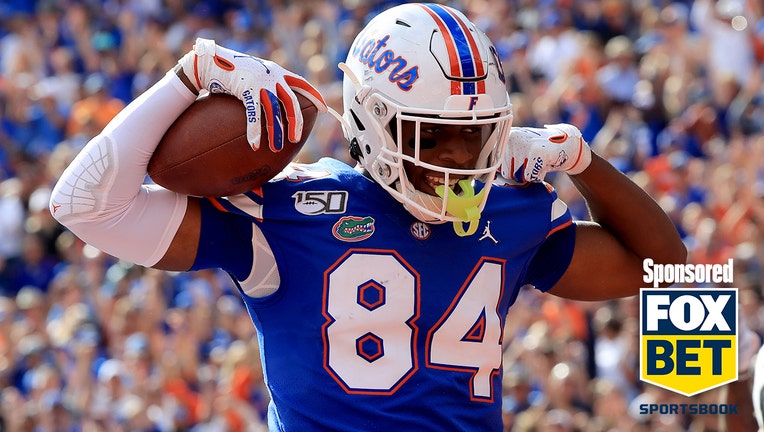 Kyle Pitts of the Florida Gators celebrates a touchdown during the game against the Vanderbilt Commodores at Ben Hill Griffin Stadium on November 09, 2019 in Gainesville, Florida. (Photo by Sam Greenwood/Getty Images)

It’s far from a surprise that quarterbacks have dominated the conversation about the first five picks of the 2021 NFL Draft.

But there’s a sleeping giant ready to ruin the narrative.

Florida pass-catching vacuum Kyle Pitts is one of the best players on the board, and his draft stock continues to rise. Standing 6-foot-6 and weighing 250 pounds, with tight-end size and wide-receiver speed, he will be an immediate red-zone threat for whichever team drafts him.

Pitts leaps off the screen on film, and his numbers against SEC defenses (43 catches, 770 yards, 12 touchdowns) have draft scouts salivating about his potential at the next level.

So what does that mean for you as someone betting on the NFL Draft at FOX Bet?

There is serious smoke coming from an NFL source that the Atlanta Falcons are all but settled on Pitts with the fourth overall pick. There’s also a growing sense of paranoia in the Atlanta draft room about the possibility that Pitts won’t be available then, I've been told.

I know what you're thinking. Everybody I’ve talked to around the San Francisco 49ers said general manager John Lynch and head coach Kyle Shanahan wouldn’t have traded three first-round picks to move up and take a tight end, even one as gifted as Pitts.

I would argue that if you want your guy, you go get your guy.

Imagine all the formations and routes Shanahan could implement with Pitts, George Kittle, Brandon Aiyuk and Deebo Samuel. That would be one of the most loaded playmaker rooms in the league.

Mac Jones is still favored to go third (-188 at FOX Bet), of course, and the odds say it’ll either be him, Trey Lance (+125 at FOX Bet) or Justin Fields (+300 at FOX Bet) to the Niners. Shanahan is openly talking about the pick being the team's starting quarterback, too.

Either way, I don’t believe Pitts will make it past pick four. I’ve been told that the Falcons already have visions of Pitts catching jump balls from Matt Ryan for touchdowns. They want him badly, which explains the aforementioned paranoia.

So if you're looking to get your beak wet on this year's NFL Draft, I love Pitts’ Under 5.5, and I love him to be the first non-quarterback taken. The juice is higher than I usually like, but it could get even higher if you wait.