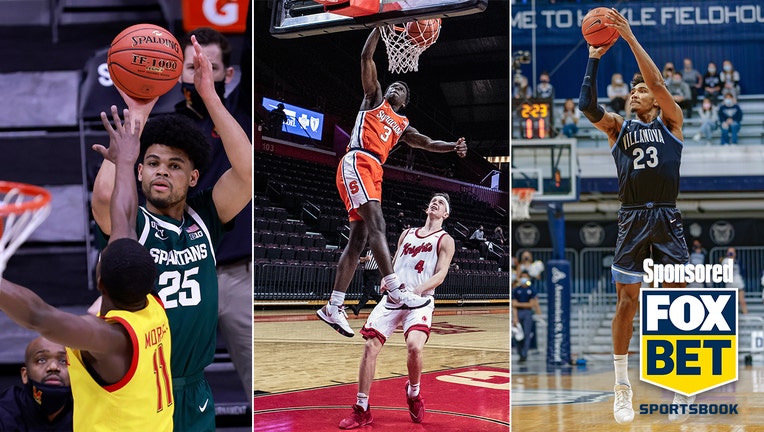 The 2021 NCAA Tournament figures to be unlike any other event the sport has had.

Well-known blue bloods Kentucky and Duke are not in the field; Gonzaga is attempting to become the first unbeaten team in the sport since 1976; and the entire tournament will be played in Indiana, due to COVID-19 protocols.

And through it all, we’re betting on every single game against the spread (ATS), with odds courtesy of FOX Bet, starting with the first round.

You read that right.

From the First Four to the championship, we have you covered with how to bet all of the matchups.

Now, come get some winners (with all odds via FOX Bet):

Lean to Appalachian State in the First Four after their miraculous run to the Sun Belt title, knocking off the two best seeds to go dancing for the first time since 2000. The Zags are the first team to enter the tournament undefeated since Kentucky in 2015, and the Jalen Suggs-led WCC champs are attempting to become the first unbeaten team in college basketball since Indiana in 1976. Gonzaga has won 23 straight games by double figures and that continues with an easy win over Appalachian State.

Bryce Drew, the first-year coach for the Antelopes, is a March Madness legend dating back to his buzzer-beater for Valpo. Iowa’s weakness is defending the 3-pointer, but the Antelopes are 245th in the country on 3s. Don’t overthink it.

This is not a typical Bill Self team with a lottery pick. The Jayhawks are an elite defensive team, but due to COVID-19 ⁠— which cut their Big 12 tourney short ⁠— it’s unclear just who will be available for their first-round game vs. the Eagles.

Ohio has been terrific ATS this year (14-7), and the Bobcats have lost just once in the past seven weeks. Led by guard Jason Preston, the Bobcats nearly beat Illinois back in November. Virginia was once 11-2 but only has one win over a tournament-bound team (Syracuse) in the last month. This opened with the Cavs as double-digit favorites and it was quickly bet down. Sprinkle some on the money line.

A 12-seed has beaten a 5-seed in 35 of the last 40 tournaments. And in 13 of those 40 years, at least two No. 12 seeds have defeated No. 5 seeds. The Gauchos put up gaudy numbers in the Big West, but haven’t defeated a tourney team. Creighton opened as a double-digit favorite and it was immediately bet down.

The Trojans feature potential No. 1 pick candidate Evan Mobley, who will remind some folks of Kevin Garnett or Chris Bosh. The problem? They don’t have much else. I believe Drake (20-6-1 ATS) advances vs. Wichita State, and I’ll consider backing them vs. the Trojans if Drake’s best post presence, Shanquan Hemphill returns from injury.

As usual, the Rams play outstanding defense ⁠— 12th in the country ⁠— but they have gotten destroyed on the defensive glass all season (289th in the nation), which means a potentially big game for Oregon's Eugene Omoruyi and LJ Figueroa inside.

The Sooners limp in having lost five of six, but four of those came against teams that are seeded fourth or higher in the tournament. Oklahoma's offense flows through senior Austin Reaves, but defensively they do a terrible job against 3-pointers (256th in the country). Fortunately, Missouri ⁠— which has only beaten one NCAA Tournament team in the last five weeks ⁠— is a poor 3-point shooting team (254th).

Gotta roll with Mt. St. Mary’s if only to root for 5-foot-8 point guard Damian Chong Qui, the 15-point per-game scorer who played every minute of the Mountaineers' last five games, two of which went overtime. The top-seeded Wolverines are susceptible, but not to the winner of this game. The injury to second-leading scorer Isaiah Livers is significant for Michigan, but they should cruise by Mt. St. Mary’s.

The Tide are 18-0 when they score 80 points. They’ve won six in a row and nine of 10. Great coach (Nate Oats), senior leader (Herbert Jones) and a promising lead point guard in Villanova transfer Jahvon Quinerly. The Gaels have only played 17 games, and they’re not good defensively (161st) or offensively (210th).

Terrific backcourt, two NBA lottery picks, and a coach in Shaka Smart who knows something about the Final Four. My only concern: The Longhorns are turnover prone, and Abilene Christian forces more turnovers than anyone in America.

The Spartans don’t have a win over a tournament team and aren’t in the top 100 offensively. They’re 312th in 3-point shooting and 255th in free throw shooting. Seminoles roll.

The Hoyas' run to the Big East title was incredible, but the Buffaloes are better than all of those opponents. Colorado has a guard ⁠— McKinley Wright ⁠— and an efficient offense that is second in the country in free-throw shooting and has eight wins over tourney teams.

Michigan State has the worst ATS of any team in the tournament (9-18). Sure, they’ve beaten No. 1 seeds Michigan and Illinois, but Sparty has been woefully inconsistent on offense all season. UCLA is the same boat. If you’re going to pick a First Four team to win two games, ride the Spartans over the Bruins, then the BYU Cougars.

Darkhorse alert ⁠— the Huskies are 16-5-1 ATS this year, third-best in the country. And when in doubt, roll with the best player on the floor, and that’s lottery pick James Bouknight, one of the most explosive scorers in the country.

Few teams can tout three future pros ⁠— Javonte Smart, Cameron Thomas, Trendon Watford ⁠— but the Tigers have the offensive potential to make a Final Four run. The problem is, their defense is abysmal. The Bonnies don’t have a senior or much depth, so let’s see if their top-20 defense holds up against LSU.

I think the Bears are the second-most likely No. 1 seed to reach the Final Four. The only question here is whether or not the Bears touch 90 for the eighth time this season.

The Buckeyes played four close games in the Big Ten tournament, including two that went to overtime. Don’t be surprised if Oral Roberts, led by Max Abmas, the nation’s leading scorer (24.3 ppg) hangs around for a bit. But they’re too putrid defensively (285th in the country) to win outright.

One of my first bets of the tournament was the over (162). Did Colgate put up elite stats (third in the country in 3-pointers, fifth in effective FG%) against a 15-game schedule in which it didn’t face one team in the Ken Pom Top 150? No 14-seed has beaten a 3-seed in the last three tournaments.

The Mean Green had a tough non-conference schedule ⁠— Arkansas, West Virginia, Loyola Chicago ⁠— so they’ll be ready for Purdue. North Texas starts five seniors, while Purdue has no seniors. The difference will be Purdue’s 6-foot-10 Trevion Williams, who had 10 double-doubles this season.

The Wildcats lost their leader, senior point guard Collin Gillespie, less than two weeks ago and have lost two close games since. Limited offensively, the 23-1 Eagles should be able to hang around and make it interesting thanks to Chandler Vaudrin, who leads the country in triple-doubles. Winthrop hasn’t won an NCAA Tournament game since 2007.

The Red Raiders have the talent, coaching and experience to make a Final Four run. But this a tough draw. I took the under (132) in what should be a low-scoring affair between two top-25 defenses.

The Gators have lost three of four and haven’t beaten a tourney team since January 30th. Virginia Tech has only played five games since Feb. 1 due to COVID-19.

The Badgers have lost six of eight. In their last seven games against NCAA Tournament teams, they’re 0-7. This figures to be a rock fight, as UNC can be anemic offensively (270th in 3-pointers, 207th in 2-pointers). Look hard at the under.

The Illini have lost once in the last eight weeks, and have perhaps the best 1-2 punch in the tournament in All-American guard Ayo Dosunmu and center Kofi Cockburn. Drexel is an elite 3-point shooting team (37th in the country) and that’s their only hope to keep it close.

The Cougars probably have the least respect among casual fans because they play in the AAC. But in a couple of games, Kansas transfer Quentin Grimes might be the best player you’d never heard of.

The Mountaineers usually win with defense, but Bob Huggins’ offense this year is among the nation’s best (11th in efficiency). Quirky: They’re only 291st in 2-point field goal percentage, but they dominate the offensive glass (13th in the nation) ... so they score, anyway.

Bad job by the committee pitting potential No. 1 pick Cade Cunningham in the most difficult quadrant, but the Cowboys should advance here against a Liberty team that put up impressive stats (top 10 in 3-point efficiency, 2-point efficiency) against a pitiful schedule.

The Beavers are lucky to be here after three stunning wins in the Pac-12 tournament. The Vols have two potential lottery picks in Keon Johnson and Jaden Springer.

The Aztecs, who were 30-2 last year and poised to be a No. 1 seed, have won 14 straight this season and have the shooters to give Syracuse’s 2-3 zone problems. SDSU is 37th in the country in 3-point shooting, led by Jordan Schakel (46 percent) and Terrell Gomez (40 percent).

A matchup of two top-20 defensive teams, which has me leaning to the under rather than a side. Clemson beat Purdue and Alabama in the non-conference, and Rutgers has only beaten one tourney team in this calendar year.

Perhaps the best first-round game. It’s criminal that the Ramblers ⁠— who went to the Final Four in 2018 ⁠— aren’t a higher seed. The Yellow Jackets are on a tear, having won eight straight, but they really struggle defending the 3-point line (307th in the country).