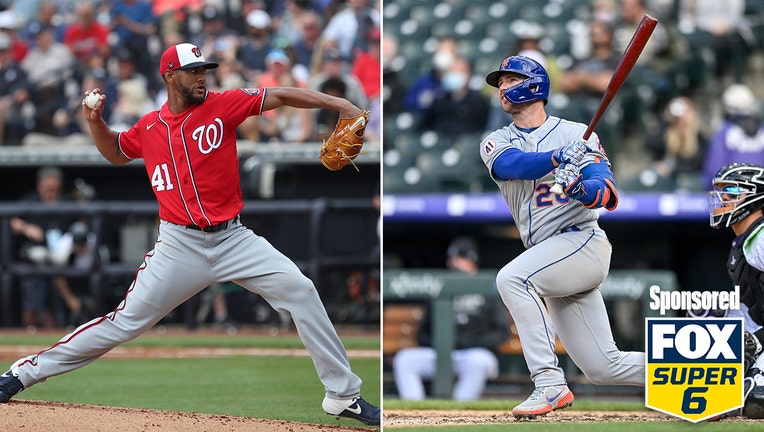 The National League East was celebrated heading into the 2021 season as the very best in Major League Baseball and among the most competitive in all of sports.

Three weeks into the season, the competitive part is proving accurate. The quality of play? Maybe not so much.

Friday morning began with all five teams in the division separated by a game after 10 percent of the schedule has been played. The bad part? The Mets, Phillies, Braves, Nationals and Marlins are all at .500 or under as the weekend began.

The Mets and Nationals will get together this weekend for a three-game set at Citi Field that could start to answer some questions about the structure of the division for the rest of the year.

And Saturday’s Game of the Week on FS1 (4 p.m. ET) will be another chance for you to win some money on the FOX Super 6 Late Inning Challenge. Answer all six questions correctly and you could win the $1,000 jackpot. It's quick, it's easy and best of all, it's free! Just download the FOX Super 6 app on any tablet or mobile device.

In that spirit, here are six things you should know about the Mets and Nationals before making your picks.

Sample sizes are small, but the Nationals' ERA in those spots has been 5.06 – 22nd in the majors. Their 1.50 walks/hits per innings pitched (WHIP) ratio is 20th in the majors. Again, it's a small sample size to this point, but it isn’t encouraging.

In the early going, both the Mets and Nationals have not been strong with runners in scoring position. Washington is hitting .228 in this situation – ranked 21st. The Mets are even worse with a .186 average – the worst in the National League and second-worst in Major League Baseball. (Cleveland is at .165.)

The Nationals' pitching staff has scared a lot of people over the past three seasons. Pete Alonso would not be one of them. The Mets slugger has hit 11 homers in just 29 games against Washington, carrying a .330 average.

Juan Soto will miss this game for the Nationals after being placed on the injured list with a strained left shoulder. Soto was off to a good start for Washington, hitting .300 with two homers in 14 games. Lifetime against the Mets, Soto is a beast with a .315 average, nine homers, 26 RBIs and a .980 OPS.

Both of these teams finished in the bottom of the NL East last season in part because they struggled in division play. Where this division will be won and lost in 2021 is how you do against the teams in your little corner of the world.

So far, the Mets are 5-3 against the East while the Nationals are 1-2. (These two teams had an Opening weekend series postponed for COVID-19 protocols with Washington.)