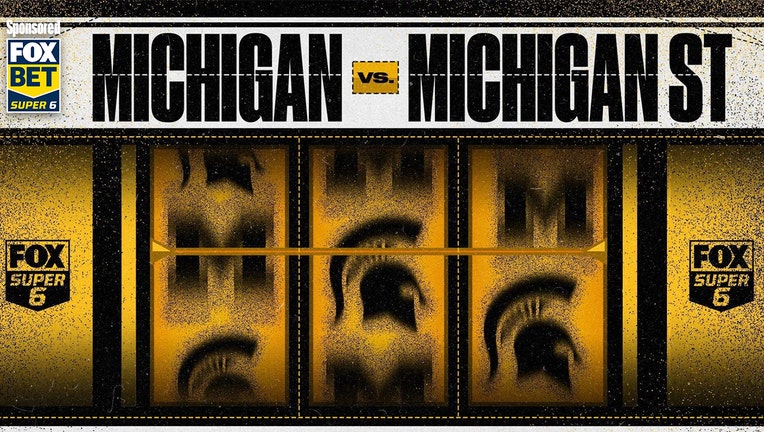 From the Upper Peninsula to the Toledo Line, the conversation throughout the state of Michigan certainly hasn’t been about the Detroit Lions.

Michigan and Michigan State were not expected to be in that conversation for the Big Ten East title with Ohio State and Penn State. And yet, both teams arrive in East Lansing on Saturday afternoon (12 p.m. ET, FOX) not just carrying hopes for the Big Ten title, but for staying alive in the College Football Playoff picture.

The Spartans haven’t been kind to Jim Harbaugh’s squad, and the critics of the controversial Michigan coach will always point out his big-game record. But this could be the Wolverines' best running attack since he arrived, with Blake Corum and Hassan Haskins leading the way.

And Mel Tucker could be the frontrunner for national coach of the year at Michigan State, creating a steady attack in his second year that also features a stout defense.

Michigan-Michigan State is another chance for you to win some serious cash with FOX Bet Super 6. Just answer all six questions correctly and you could win the $10,000 grand prize. It’s quick, easy, fun and free to play by downloading the FOX Bet Super 6 app on your phone or tablet.

Here are this week’s questions, as well as some predictions for the game.

What will be the total points scored in the first half?

The averages are pretty similar for both teams on the offensive and defensive sides of the football. One thing to keep in mind is Michigan tends to be more of a second-half team. In that sense, let’s keep the score reasonable on this one.

Which team will have the longest rushing play, and how long will it be?

The options: Michigan, Michigan St, Tie with ranges from 0-51+

Corum and Haskins have hit on a few big runs this year with Corum’s 67-yard run standing out. While Michigan State’s Kenneth Walker is approaching 1,000 yards on the ground, it is important to remember that his longest run this year is 17 yards.

Which team will have the longest completion, and how long will it be?

The options: Michigan, Michigan State, Tie with ranges from 0-51+

Get to know Payton Thorne, America. The sophomore quarterback from Naperville, Illinois has thrown for 15 touchdowns and four interceptions. He has hit an 85-yarder. Cade McNamara — however — has a better stable of wide receivers with Michigan, and he has hit an 87-yarder. The hunch is there’s one monster pass that hits in this game.

Which team will have the most rushing yards and how many more yards will it have?

The options: Michigan, Michigan State, Tie with ranges of 1- 91+ yards

This is the case of two greater than one. Corum and Haskins are an excellent tandem with an edge over Walker’s grind-it-out style. This will be close, though.

Which team will have the most passing yards and how many more yards will it have?

The options: Michigan, Michigan State, Tie with ranges of 1- 91+ yards

McNamara may be viewed as a game manager in a lot of ways, but he has been productive whenever the Wolverines need it. And while Thorne has been really solid as well for Sparty, take McNamara’s side.

Which team will have the most total yards and how many more yards will it have?

The options: Michigan, Michigan State, Tie with ranges of 1- 81+ yards

We predicted Michigan to have the most rushing and passing yards, so we have to pick the Wolverines here, too.

Which team will win and by how many points?

The options: Michigan or Michigan State with ranges from 1-17+ points

Harbaugh probably needs a big win more than just about any coach in the country. And there has been a history of the Wolverines coming up small. But it stops here, and Michigan eeks one out.