LOUISVILLE, Ky. (AP) - Bob Baffert is on track to have his record seventh Kentucky Derby victory taken away and won't be able to run any horses in the prestigious race for the next two years.

Churchill Downs on Wednesday suspended the Hall of Fame trainer for two years after an additional drug test of Medina Spirit confirmed the presence of the steroid betamethasone in the Kentucky Derby winner’s system. The next step could be the Kentucky Horse Racing Commission disqualifying Medina Spirit, and now Baffert won't be able to enter any horses in the Derby or other races at the storied track through the spring of 2023.

"Reckless practices and substance violations that jeopardize the safety of our equine and human athletes or compromise the integrity of our sport are not acceptable and as a company we must take measures to demonstrate that they will not be tolerated," Churchill Downs Inc. CEO Bill Carstanjen said. "Mr. Baffert’s record of testing failures threatens public confidence in thoroughbred racing and the reputation of the Kentucky Derby. Given these repeated failures over the last year, including the increasingly extraordinary explanations, we firmly believe that asserting our rights to impose these measures is our duty and responsibility."

Churchill Downs initially suspended Baffert indefinitely pending the investigation and now said it reserves the right to extend Baffert’s suspension if he has any other violations in other states. Baffert has had five in the past 13 months.

Maryland racing officials allowed Medina Spirit and Baffert-trained Concert Tour to run in the Preakness on May 15 only after undergoing three rounds of prerace testing. New York banned Baffert indefinitely and prevented him from entering any horses in the Belmont Stakes.

The stunning ban by Churchill Downs could have a domino effect that takes the only trainer to win the Triple Crown since 1978 off the trail completely. It was not immediately clear if Preakness and Belmont officials will follow suit or wait until the Kentucky Horse Racing Commission's investigation is complete.

Baffert's attorney, Craig Robertson, said the second test showed 25 picograms of the steroid, after 21 picograms were found in the first sample. Even a trace amount of betamethasone — a picogram is a trillionth of one gram — is prohibited on race day in Kentucky, Maryland and New York, which are home to the sport's Triple Crown races, and considered a violation.

Robertson said additional testing is being conducted to try to trace the source of the drug to an ointment to treat a skin infection and not an injection. He and Zedan attorney Clark Brewster said they expect tests to show the ointment is responsible and not injections into one of the horse's joints. 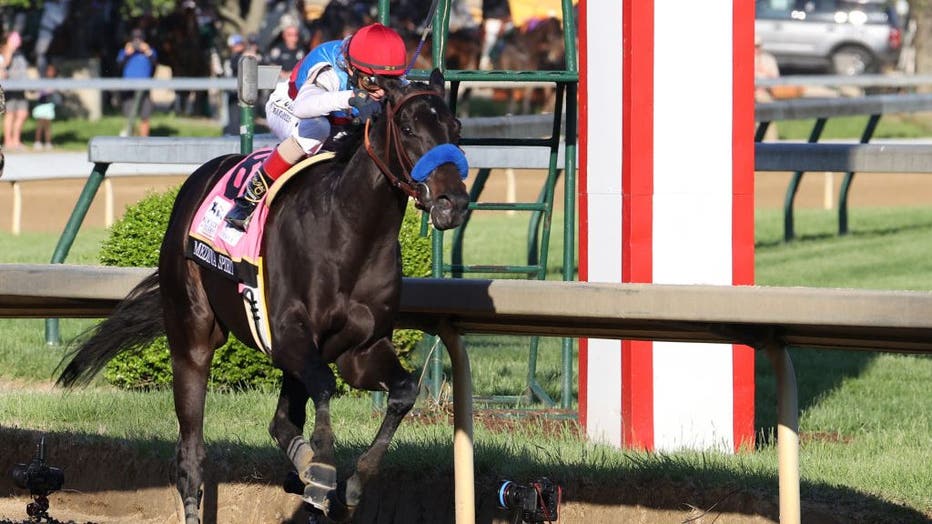 Medina Spirit (8) ridden by John Velasquez leads on the inside coming through the final turn and wins the 147th Running of the Kentucky Derby on May 1, 2021 at Churchill Downs in Louisville, Kentucky. (Photo by Brian Spurlock/Icon Sportswire via Gett

"I think that will shed the light most prominently on the issue here for us," Brewster told The Associated Press by phone. "The whole basis for listing betamethasone is because it’s injected into a joint and they want you not to inject the joints too close to the race, so the whole substantive basis is out the window if it’s a salve, and it can be proven scientifically and empirically to be the salve."

Rules in Kentucky do not differentiate punishment based on the source of the substance, which can be given to horses to help their joints and Baffert believes came from the dermatitis ointment. Churchill Downs said Medina Spirit would be disqualified if the split sample came back positive for betamethasone.

A spokeswoman for the Kentucky Horse Racing Commission declined to comment, citing the ongoing investigation. Sherelle Roberts-Pierre said the commission "values fairness and transparency and will provide information to the media and public at the close of an investigation."

Brewster said he hoped the additional tests would come back in a week to 10 days.

"At the end of the day, we anticipate this case to be about the treatment of Medina Spirit’s skin rash with Otomax," Robertson said. "We will have nothing further to say until the additional testing is complete."

If Medina Spirit is disqualified, Mandaloun would be elevated as the winner of the May 1 Kentucky Derby.

"I can’t control the outcome of that, so it’s something I give very, very little thought to," said Brad Cox, who trains Mandaloun and would be the first trainer from Louisville to win the race.

Baffert initially denied wrongdoing in a May 9 news conference announcing the positive result, which he called "the biggest gut-punch in racing for something that I didn’t do." He later cited the antifungal ointment as a potential cause.

Asked if he thought tests showing evidence of the steroid coming from an ointment would change the outcome, Brewster said: "You’re asking me to predict the behavior and the decision-making of others, but if you ask me ‘should’ — absolutely."

This would be the second Derby disqualification in three years after 2019 winner Maximum Security was DQ’d for interference following the race and Country House declared the winner. The only previous time that a Derby winner was disqualified after the fact for failing a postrace drug test was 1968 with Dancer’s Image.