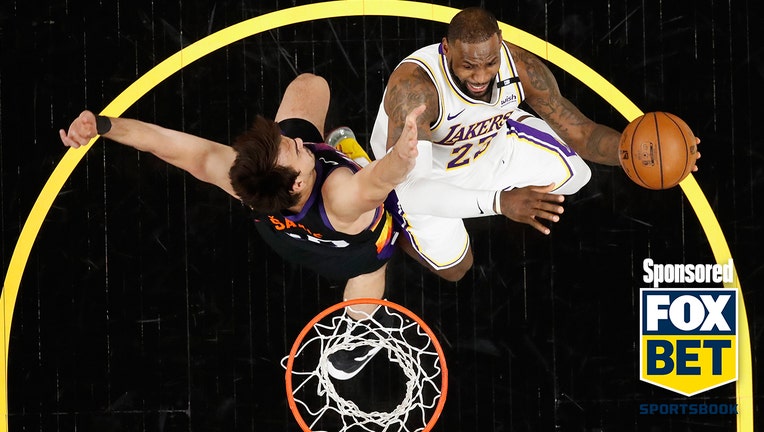 LeBron James of the Los Angeles Lakers attempts a lay-up shot during Game One of the Western Conference first-round playoff series at Phoenix Suns Arena on May 23, 2021 in Phoenix, Arizona. (Photo by Christian Petersen/Getty Images)

As expected, the Phoenix Suns came out fast and strong in their Game 1 victory over the Los Angeles Lakers, dropping LeBron James to 4-7 in his past 11 series openers.

For years, LeBron has made a habit of not prioritizing Game 1. He goes through the motions, plays without aggression and tends to let his opponents feel good about themselves. It’s all a part of some maniacal master plan.

Now watch what happens next.

The future Hall of Famer is about to dust off the old cape and turn up the intensity. My guess is that we'll see vintage No. 23, the guy who takes 20 shots and 10 free throws while doing everything in his power to even the series.

James likely understands that his supporting cast (sans Anthony Davis) isn’t good enough to carry the Lakers while he’s complacent. And though he’ll have to exert himself more than usual early in a series, he might not have a choice.

First off, I love the Lakers to win outright (-125 on the moneyline at FOX Bet, meaning a bet of $10 wins you $18 total). And yes, I’m going moneyline because I absolutely despise laying 1.5 points in a basketball game.

It’s not a habit of mine to drink an extra 15 cents of juice (-125 on the moneyline as opposed to the -110 you'd get on the point spread), but I’ve seen enough playoff games land on "1" to buy the extra insurance. If the Lakers win by one, spread bettors will lose, and we’ll win.

Second, I’m rolling the dice on James putting the ball in the basket. FOX Bet is dealing LeBron’s scoring prop at O/U 24.5 points. I don’t love this one as much as the Lakers moneyline, but I expect LeBron’s volume to increase from the floor and at the line.

James took only 13 shots in Game 1, and seven of them were from 3. He didn’t attack; he settled. He opted for step-back jumpers instead of post-ups and runs to the rim. This lack of aggressive offense also kept James off the charity stripe. Odds are good that he’ll shoot more than seven free throws Tuesday. I would bet on that, too, if I could.

LeBron didn’t play well at all Sunday and still scored 18 points in 36 minutes. Imagine what he’s going to do down 1-0 in the series, with a chance to send it back to Los Angeles all square 1-1. He lives for opportunities such as this.

Lastly, this is such a great time to buy stock in the Lakers to win the series (-105; bet $10 to win $19.52 total). FOX Bet has the Suns favored (-120), which is interesting, to say the least. Most sportsbooks have Los Angeles as a small favorite or -110, so apparently the FOX Bet traders have more faith in Phoenix than most.

It’s worth repeating from Sunday’s column that LeBron James has never, ever lost a first-round playoff series. Many teams have tried, but the King remains undefeated (14-0) in Round 1, and I can’t see the NBA bouncing its biggest star this early in the postseason.

James keeps ears and eyeballs on the product, and television ratings are much better when he makes deep playoff runs. Star power is a prominent piece of playoff handicapping, and nobody’s star shines brighter than LeBron’s.

I believe the Lakers will have every opportunity to equalize this series. James and Davis aren’t going to combine for 31 points again, Frank Vogel will hopefully phase out Andre Drummond, and it’s very unlikely that L.A. shoots 27% from 3 in back-to-back games.