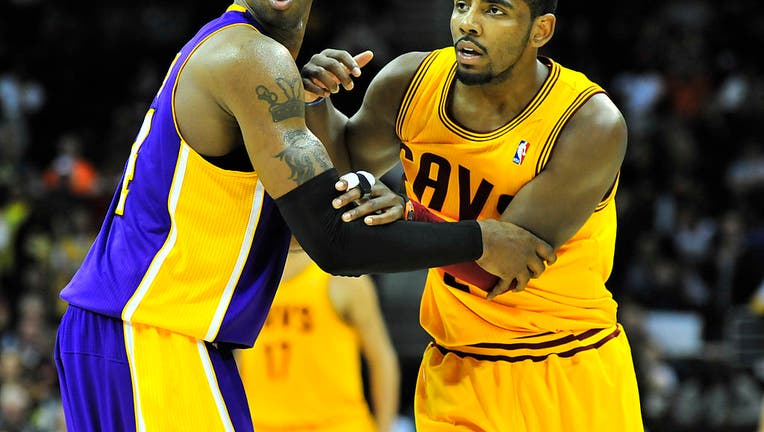 NEW YORK - Every time Kobe Bryant came to Madison Square Garden, it was an event.

From the 1998 All-Star Game, his first one, to the night of Feb. 2, 2009, when he broke the arena's scoring record, people just wanted to be in the building.

Kyrie Irving couldn't bring himself to play after his friend's death. The ones who took the floor did so with the knowledge that Bryant would have had one expectation.

“Understand that he’d want you to go out there and play — hard," Knicks veteran Taj Gibson said.

Julius Randle, who began his career as Bryant's teammate, had 22 points and 15 rebounds to lead New York to a 110-97 victory over the Brooklyn Nets.

The Nets were already at the arena when they learned that Bryant and his daughter were among those who had died in a helicopter crash. Irving left after warming up, and at least some people on both sides hoped the game wouldn't be played.

“It was an emotional locker room. It was a quiet locker room. No one spoke for whatever, three hours before we tipped off," Nets coach Kenny Atkinson said. “No one really spoke. Sometimes there are no words and I didn’t have any words to console them."

Randle played with the Lakers during Bryant's final two seasons. In his first season with the Knicks, he starred at Madison Square Garden on a night the arena was lit up in the colors of his old team.

He left without speaking to reporters.

Nets guard Spencer Dinwiddie did talk, tearing up while doing so.

“I was born in ’93. He was drafted in ’96. Grew up in South Central Los Angeles. He was everything to my generation," Dinwiddie said. “There’s a whole generation of kids, L.A. kids. That was our childhood."

Madison Square Garden was the site of some of Bryant's biggest highlights and his picture was on the marquis outside.

Inside, there was little of the energy that MSG contained whenever Bryant played here, save for a “Kobe! Kobe!” chant after a moment of silence before the game.

“Just the air was out of the whole arena," Gibson said.

Marcus Morris added 21 points to help the Knicks earn a split of the New York season series. He is from the Philadelphia area, same as Bryant.

“Somebody said to me earlier, Superman’s not supposed to die," Morris said, “and to us he was Superman."

Dinwiddie, back in the starting lineup with Irving out, scored 23 points for the Nets.

Irving was at the arena and warming up before leaving after learning the news about Bryant. The Nets said he was not with the team for personal reasons.

“Obviously, our leader Ky wasn’t able to play. Our thoughts go out to him as well as to the families, the Bryant family as well as the other families on the helicopter, parents, the pilots," Nets guard Garrett Temple said.

“That was Spencer’s idol. When I first heard about it, those was the first two guys on the team I thought about most. Especially with us, we saw him just last month, him and his daughter."

Bryant set the scoring record at the current building with 61 points. Carmelo Anthony later bettered it by a point, but Bryant still shares the opponent record with James Harden.

Irving scored 45 points Saturday in Detroit, helping the Nets to an overtime victory that snapped their five-game losing streak.

Nets: Irving's absence means he won't play at MSG this season after choosing the Nets over the Knicks in free agency. He was injured during the first meeting at the arena. ... Taurean Prince scored 14 points.

Knicks: The Knicks remained without rookie RJ Barrett, who will be out at least another week with a sprained right ankle. ... Mitchell Robinson scored 12 points.

Atkinson was in the arena for Bryant's 61-point performance, as a Knicks assistant.

The Knicks shot 53.3% and the Nets 42%, a huge improvement over the last meeting in December. The Nets shot 26.9% that night, lowest in the NBA this season, and their eight 2-point field goals were the lowest in an NBA game since the Lakers and Pistons each made four in a Nov. 22, 1950, game that ended 19-18.