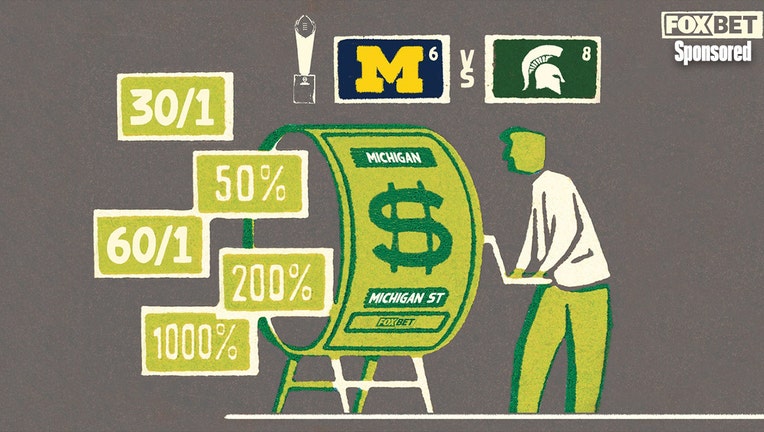 It's difficult to articulate just how electric the atmosphere is when the rival Michigan Wolverines and Michigan State Spartans meet every season. Whether it's in the Big House where students and fans are decked out in Michigan blue or at Spartan Stadium where your eyes get lost in the sea of green and white, zealots of these two teams know no bounds when it comes to showing their loyalty.

And this season, with both teams ranked in the nation's top 10, the stakes are higher than ever. Everything is on the line, especially College Football Playoff hopes. So which team is the better bet to win the national title?

​Let's look at how we got to Week 9 with both teams vying for a CFP spot.

In the preseason, coach Jim Harbaugh and his No. 6 Wolverines were sitting at 100-1 odds to win this year's national championship – they weren't even ranked in the Top 25 at the beginning of the season. Michigan's odds have shortened considerably, now at 30-1 odds to take home the championship trophy.

It wasn't until Week 3 after they'd scored big wins against Western Michigan and Washington that they barely crept into the Top 25 at exactly the last spot.  It was also then that folks started to take notice of what was cooking in Ann Arbor.

Michigan first grabbed people's attention as a legit contender because of their defense. It ranks second in the country, allowing just 14.3 points per game. Then there's running backs Hassan Haskins and Blake Corum who have literally carried this team to victory for seven consecutive weeks and earned Big Blue's rushing offense a No. 5 national ranking. Harbaugh also has a quarterback he can trust in Cade McNamara. Nothing about his play is flashy; the Wolverines rank 104th in passing offense and 55th in team passing efficiency. But he's consistent, and consistency has been key to their undefeated season so far.

No. 8 Sparty, on the other hand, doesn't have quite the dominating defense that their division foe does as they give up 18.7 points per game. Michigan State gave up 31 points to Western Kentucky, and that was a week after barely beating a subpar Nebraska team in overtime 23-20.

The green and white's biggest weapon is on offense, led Heisman hopeful Kenneth Walker III. With 997 rushing yards, the running back has trampled all over opponents and has led MSU to its top 10 ranking.

Similar to Michigan, the Spartans weren't ranked in any preseason polls, and they finally cracked the Top 25 in Week 4. Their preseason national championship odds were 300-1, which have now shrunk down to 60-1.

In addition to a natty being at stake, bragging rights are (almost) as important this weekend at The Woodshed. This series has been played since 1898 and Michigan leads it 71-37-5, but Michigan State took home the coveted Paul Bunyan trophy last year when they shocked the Wolverines at the Big House 27-24. UM should be especially motivated after last year's disappointing loss because they were a 24.5 point favorite. This year they're favored again by four points.

The public is also high on Michigan but only slightly. Currently, 54.2% of total bets are on Blue heading into Saturday.

FOX Bet Trading Operations Manager Ben Conroy recognizes that this matchup is a big one for bettors, as it is for diehard UM and State fans.

"We have a long way to go until Saturday, but this is definitely the most bet game of the week so far."

So with only four regular-season games left, which team has the easier road to getting to the national championship game?

Both Michigan and Michigan State still have to play No. 5 Ohio State, No. 20 Penn State, and unranked Maryland. With virtually identical remaining schedules, it seems that their chances to be in the CFP mix at the season's end are pretty similar.

FOX Bet content integration specialist Jacob Blangsted-Barnor does give one team an edge, though.

"I’d certainly like to be holding a Michigan ticket at 100-1!" the oddsmaker said. "With both teams still having to play Ohio State and Penn State, it’s not an easy task as you have to assume a team would need to win out to make the playoffs.

"That starts with this weekend. As reflected in our odds, we rate Michigan's chances better."

So which of these in-state rivals are you betting on to win the national title? Pick your poison and get in the game!