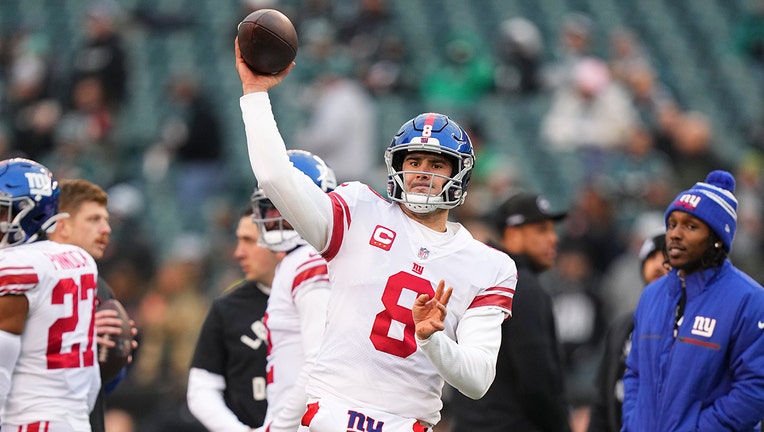 Daniel Jones #8 of the New York Giants warms up against the Philadelphia Eagles at Lincoln Financial Field on January 8, 2023 in Philadelphia, Pennsylvania. (Photo by Mitchell Leff/Getty Images)

NEW YORK - The New York Giants will travel to play the Minnesota Vikings this weekend in the Wild Card Playoffs at U.S. Bank Stadium.

The Vikings finished the regular season 13-4 after beating the Chicago Bears on Sunday and are the No. 3 seed for the NFC Playoffs.  The Giants were already locked into the No. 6 seed before the weekend.

The Giants rested their key starters in Philadelphia and lost to the Eagles 22-16.  They finished the regular season 9-7-1.

Sunday will mark the second time this season the Vikings will play the Giants. Back on Christmas Eve, the Vikings needed a franchise-record and career-long 61-yard field goal from Greg Joseph as time expired for a 27-24 win over the Giants.

The Giants, winners of four Super Bowls, are in the playoffs for the first time since 2016.

The Giants overcame injuries and a 2-4-1 slide in November and early December to become the third NFC East team to qualify for the postseason, joining Philadelphia and Dallas.

The Vikings and Giants have a previous playoff history. The Giants beat the Vikings in the 2000 NFC Championship Game at Giants Stadium in the Meadowlands.

What time does the Giants-Vikings game start?

How can I watch the NY Giants playoff game?

The Vikings vs. Giants NFL playoff game will air on FOX 5 in New York.

The game will also stream on the FOX Sports app.