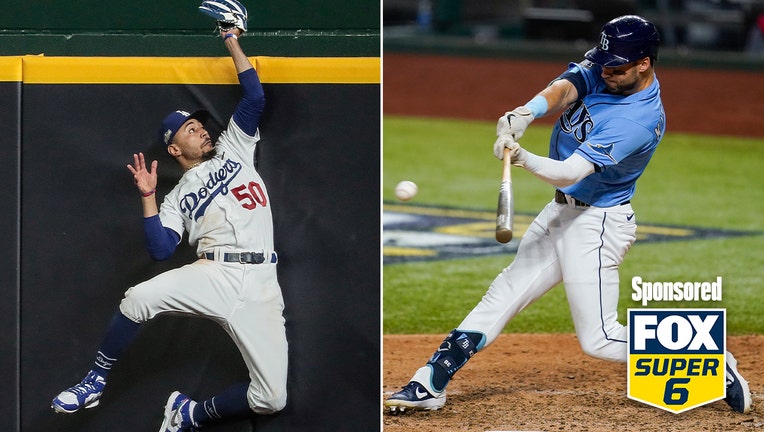 The number one song in America was "Groovy Kind of Love" by Phil Collins. Hollywood’s top draw at the box office was "Halloween IV: The Return of Michael Myers." America was days away from electing George H.W. Bush to the White House.

It was October 20, 1988. And in the Oakland Coliseum, Orel Hershiser ended one of the best years that a pitcher ever enjoyed by leaping into Rick Dempsey’s arms as the Los Angeles Dodgers became the unexpected champions of the baseball world.

Thirty-two autumns have passed and the Dodgers have arrived once again at the doorstep of history. They can win the World Series on Tuesday night with a victory over the Tampa Bay Rays in Game 6 of the 2020 World Series. The first pitch is scheduled for 8 p.m. EDT on FOX.

In order to take the Commissioners Trophy home, the Dodgers will have to win back-to-back games for the first time in this whirlwind of a series. They will send Tony Gonsolin to the mound as the starting pitcher in Game 6 against Tampa Bay’s Blake Snell – who got a no decision in Tampa’s 6-4 win in Game 2.

With FOX Super 6, you could win up to $25,000 by correctly answering six questions about the game, which will be seen at 7:30 Tuesday night on FOX. Just download the FOX Super 6 app on your phone and mobile device, make your picks before first pitch and watch the action.

Here are some of the questions that you could win on FOX Super 6 for Game 6 Tuesday night.

Combined in the first five games, the trio has accounted for 15 hits, five homers and nine RBIs. Against Snell in Game 2 of the series, the tandem combined for three hits – one of which was a Seager homer in the eighth as the Dodgers tried to rally back. Three seems to be a decent number to play on this one.

How many total runs will be scored in the game?
The choices range from 1-6 runs, , 7 runs, 8 runs, 9 runs, 10 runs and 11+ runs. In Game 5, some order was restored as both Tyler Glasnow and Clayton Kershaw held the fort down and minimized the damage. The biggest hero, however, was the Dodger bullpen which held on and recorded the final 10 outs of the game without surrendering a run.

Given that Gonsolin hasn’t been nearly as stretched out as a starter in recent days and the Rays could have a quick hook for Snell, expecting more than the six runs scored on Sunday night seems a safe pick.

How many total strikeouts will there be in the game?
The options are less than 0-13, 14, 15, 16, 17 or 18+ strikeouts. Game 5 actually featured the lowest combined strikeout total of the series at 18, drawing the total number of strikeouts to 104. (Last year’s seven game series between Houston and Washington featured 119 strikeouts.) The point is pretty clear- there have been a ton of big strikeout numbers in this series. That is likely to keep going.

What will be the highest scoring inning?
The options are a combined 1st and 2nd inning, 3rd, 4th, 5th, 6th or 7th and 8th or after. Game 5 was a rarity in this series- the middle and late innings were free from a ton of crooked numbers on the scoreboard. Only one run scored after the third inning- that came on Max Muncy’s solo homer in the fifth.

It’s asking a lot, however, to expect these bullpens to hold the line again. The later in the game could provide for more offensive fireworks.

How many total pitchers will pitch during the game?
The totals are 8 or fewer, 9-10, 11, 12, 13 and 14+. Dodgers manager Dave Roberts said that he wants Gonsolin to give him length unlike his start in Game 2, when he was clearly the first piece in a bullpen game.

Still, there have been 52 different pitchers used by both teams through five games. And even on a "good" night for the starters in Game 5, nine different pitchers were used (four by the Dodgers, five by the Rays). With the series now hanging in the balance on every pitch, expect frequent paths to the mound by Roberts and Kevin Cash at the first sign of trouble.

Choose team to win and by how many runs?
This hasn’t been easy to this point for the Dodgers, so why think it will be now? They do have an ace still remaining to be played with Walker Buehler waiting to start Game 7 if necessary.

The Rays have the pitching edge in Game 6 with Snell at this point and have been great in those "have to have it" games in this series (Game 2 and 4) when it could easily have gotten away from them. This series has a seven-game feel to it, so the pick is it will get there. Rays by 3.

Make the call on the FOX Super 6 app and you could win $25,000 with six correct picks. Download the free app today on your phone or tablet.