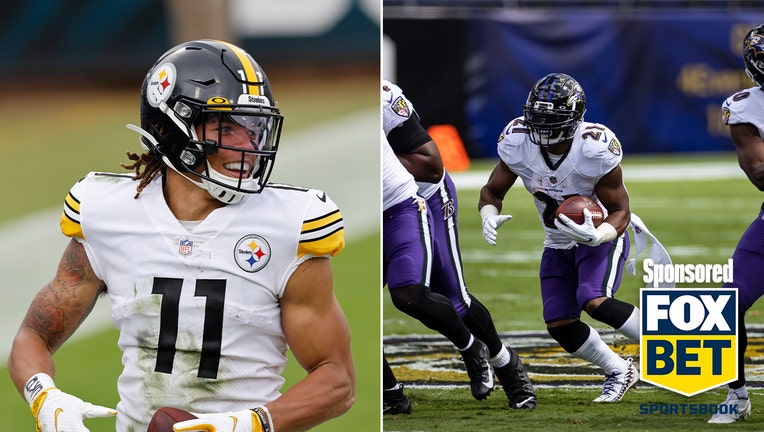 LEFT: Chase Claypool #11 of the Pittsburgh Steelers reacts after scoring a touchdown during the first half against the Jacksonville Jaguars at TIAA Bank Field on November 22, 2020 in Jacksonville, Florida. (Photo by Michael Reaves/Getty Images) RIGHT

One of the things that has allowed the Pittsburgh Steelers to begin the 2020 season of uncertainty with 10 straight wins has been the balance that they bring to the table.
It’s not just Ben Roethlisberger. It’s James Connor and Chase Claypool. It’s one of the stingiest defenses in the sport. It’s terrific head coaching by Mike Tomlin. It’s the total package that has amounted to perfection in the Steel City.

Meanwhile, the Baltimore Ravens are the opposite. The depth hasn’t been there. And the offense has appeared to be revealed at key moments as Lamar Jackson and not much else. And unless the Ravens can find some answers- starting with a Thanksgiving night game now scheduled for Sunday at Heinz Field against the Steelers (1:15, NBC)- they could be staring at the postseason abyss.

Pittsburgh has been one of the best bets when it comes to the spread, going 8-2 after beating Jacksonville 27-3 and covering the double digit number. Meanwhile, Baltimore is struggling at 4-5-1 and have struggled in recent weeks with losses to Tennessee, New England and Pittsburgh coupled with a close win at Philadelphia.

There are a ton of CustomBets and Prop Bets on FOXBet.com. Check it out today for the latest lines and specials.

The history
Second meeting of the season between the two teams. The first one in Baltimore ended with Chase Claypool’s touchdown pass with eight minutes left that kept Pittsburgh undefeated with a 28-24 win. The Steelers lead the series 29-24. The last time they swept the season series was 2017.

The storylines to watch
You can practically set your watch on what the Steelers are going to do. They are going to pound the football up the middle with Connor, then spread it with the passing weapons of Claypool, JuJu Smith Schuster and Eric Ebert. And then, they will add a defensive exclamation point. While the Chiefs may have more weapons, Pittsburgh has shown remarkable depth and an ability to beat you with death by a thousand paper cuts.

That’s exactly what is missing with Baltimore right now, who can’t seem to generate enough offense with their running game to make teams cheat to the line of scrimmage and open up the passing lanes. That means Jackson’s skills have been kept somewhat in check and the frustration is starting to show. What could add to the problems for the Ravens is running backs J.T. Barrett and Mark Ingram are both out after failing COVID-19 tests on Monday. Baltimore had to shut its facility down on a short week for COVID protocols. That’s not a good start to a short week.