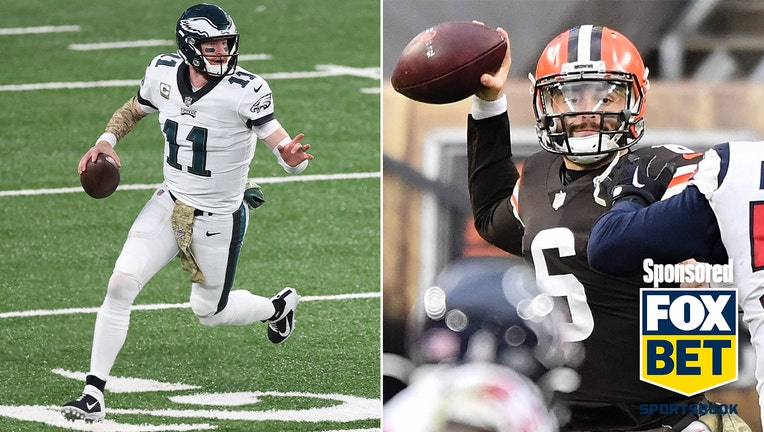 LEFT: Carson Wentz #11 of the Philadelphia Eagles in action against the New York Giants during their game at MetLife Stadium on November 15, 2020 in East Rutherford, New Jersey. (Photo by Al Bello/Getty Images) RIGHT: Quarterback Baker Mayfield #6 of

The Cleveland Browns have spent the better part of the last 20 years as an under .500 football team.

The Philadelphia Eagles were hoisting the Lombardi Trophy three years ago with a young quarterback who was ready to take the NFL by storm.

And yet, when the two teams meet on Sunday afternoon (1 p.m., FOX) at FirstEnergy Stadium, it will be tough to tell which team is which. While the Eagles lead the NFC East at 3-5-1, they are the product of a bad division and two wins against back-up quarterbacks. The Browns may not be in the hunt of the AFC North with the Steelers sprinting along undefeated, they could be a very uncomfortable matchup if they play football in mid-January.

One bet to keep in mind could be the running backs. Nick Chubb and Miles Sanders are potential workhorses for the Browns and Eagles. If they both score two plus touchdowns, you would hit on a prop bet that pays +3400.

The history
Unlike other NFC-AFC rivalries that meet once every four years, the Eagles and Browns have a decent series history dating back to Cleveland’s role in the NFL back before the AFL merger. The Browns lead the series 34-17-1 dating back to 1950. However, Philadelphia has won five straight in the series dating back to 2000 and hasn’t lost in Cleveland since 1988.

The storylines to watch
The Browns aren’t really flashy. There are times when they appear to be doing it with mirrors, especially with Odell Beckham out. But at 6-3, they are in the mix in the crowded AFC playoff race with teams like the Bills, Ravens, Dolphins, Raiders and Titans. Baker Mayfield has shown signs of progress this season, but it would be premature to label him a finished product. Chubb is the biggest x-factor for Cleveland and he could have a monster day against the Eagles’ weak linebacker corps.

Meanwhile, the Eagles are maddening as last week’s loss to the Giants proved. Carson Wentz is regressing. Doug Pederson’s seat is starting to get a little warm after a lackluster effort and little answers to unlock the offense. The wide receivers that were progressing took a step back against New York with Alshon Jeffrey’s return. And then, the Eagles defense seems to break at the wrong time. Remember that the Eagles have five straight against playoff level teams starting in this game. The Browns game could be the most attainable. If they don’t win Sunday, this could get really ugly.