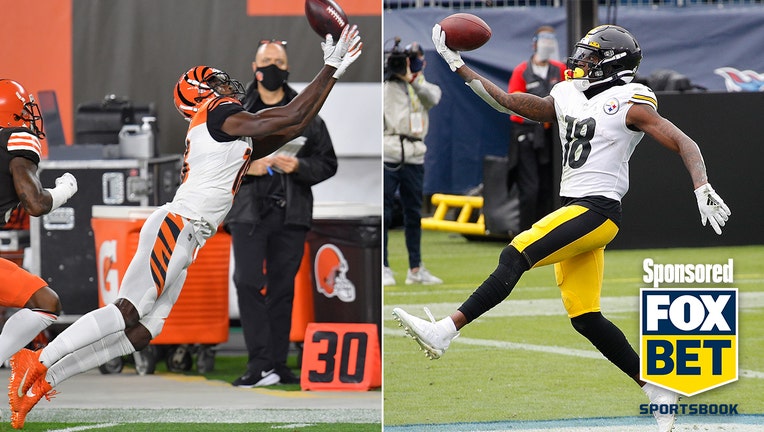 LEFT: A.J. Green #18 of the Cincinnati Bengals attempts a reception against Terrance Mitchell #39 of the Cleveland Browns during the first quarter at FirstEnergy Stadium on September 17, 2020 in Cleveland, Ohio. (Photo by Jason Miller/Getty Images) R

The Pittsburgh Steelers may be the “World’s Team” according to Ben Roethlisberger. The question that the only remaining NFL undefeated team is facing is whether the real world is going to impose on the quest for perfection.

Four Steelers players- including Roethlisberger- were placed on the COVID-19 list this week after edging out the Dallas Cowboys last week to stay perfect.

On Sunday afternoon at Heinz Field (4:25 p.m., FOX), the Steelers will host a Cincinnati Bengals team that is far better than its 2-5-1 record may indicate. The Bengals under quarterback Joe Burrow – are coming off a bye week which followed an impressive 31-20 win over Tennessee that snapped a three-game losing streak.

The sports betting information
Because of uncertainty about Roethlisburger’s status, the game- as of Wednesday night- was listed off the board on FOXBet.com. The Steelers were projected to be a seven point favorite, but that obviously could change with news on the status of key players. Make sure to check out FOXBet.com for the most up to date information, including numerous player props and Bet Boosts on the contest.

The history
As you could imagine with the track record of these two teams, the series has been a lopsided one. The Steelers lead 66-35, including 2-0 in the post-season. The Steelers have won 10 straight in this series dating back to Nov. 1, 2015. There is one underlying stat in that the average margin of victory for the Steelers has been 8.5 points with seven of those games being one possession contests. This is the first meeting of the year between the two teams, the second one will be a Monday night game in the Queen City on Dec. 21.

The main storylines to watch
So much of Pittsburgh’s success has been because of its balance offensively. James Connor has rushed for 4.4 yards per carry and five touchdowns. Roethlisberger has thrown for 18 touchdowns and just four interceptions. The Steelers offensive line has given his protection, allowing only 10 sacks through eight games. Five different Steelers have caught touchdown passes from Roethlisberger with Chase Claypool and Juju Smith Schuster emerging as top receivers. On the defensive side, Pittsburgh has 32 sacks – including seven for TJ Watt and six each for Bud Dupree and Stephon Tuitt. It is one of the deepest teams in the league and it wears teams down.

Meanwhile, the Bengals have gotten everything they could ask for from Burrow, who has thrown for 2,272 yards, 11 touchdowns and five interceptions. Joe Mixon – his main running back- is questionable, however, with a foot injury and could miss. If that happens, Cincinnati must be creative to get some offensive looks for Burrow to try and win a shootout. Otherwise, the Bengals defense, which is yielding over 400 yards of offense to opponents, could be in for a long afternoon.