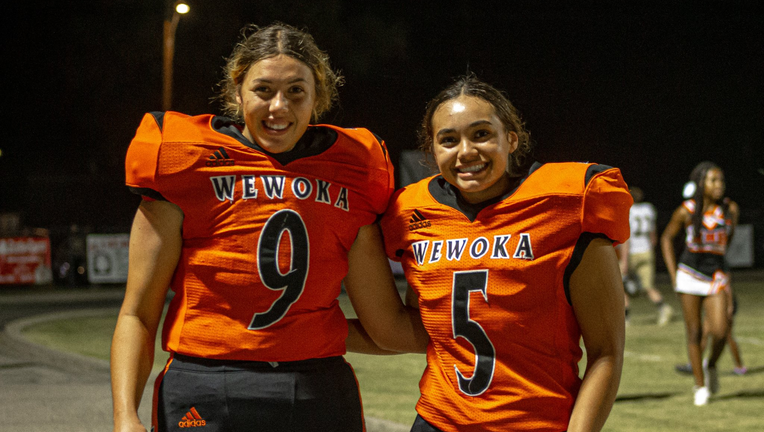 WEWOKA, Okla. - Natalie Davis and Callie Ramsey have been best friends their entire lives, and their bond deepened on the gridiron when they were asked to play football for a local team to prevent a forfeit.

The Wewoka Tigers in Wewoka, Oklahoma, said they came close to not playing football last week due to a lack of players. So they asked the two high school seniors to suit up.

"When asked to play, I did not hesitate to say yes cause I know what it is like to not have enough players to play the game you love as we struggled with that issue with softball this year," 17-year-old Ramsey told FOX Television Stations.

"At first, I was nervous being out there, but as the game went on, it became fun and exciting especially with all the support and excitement we received from other teammates, coaches and the fans as we ran onto the field to play," she continued.

The Tigers ended up losing to Mounds High School 47 to 14, but it was still a night to remember.

Although the girls said they didn’t score, there was one specific moment during the game that left them proud.

"I was not able to score, but I kept one guy from scoring," 18-year-old Davis said. "But that was the best feeling that I have ever felt."

While Ramsey said she doesn’t know if she’ll play again unless asked, Davis is already on the roster for this Friday.

It’s no longer unheard of to see both young men and women playing on the football field, together.

In December 2020, Sarah Fuller became the first woman to appear in a football game for a Power 5 Conference when she kicked off for Vanderbilt to begin the second half against Missouri.

But Ramsey said the focus shouldn’t be on the biological differences between the players.

"To me, what I did was not all about women playing football," she said. ‘"It's about stepping up and doing things out of your comfort zone in order to help others."