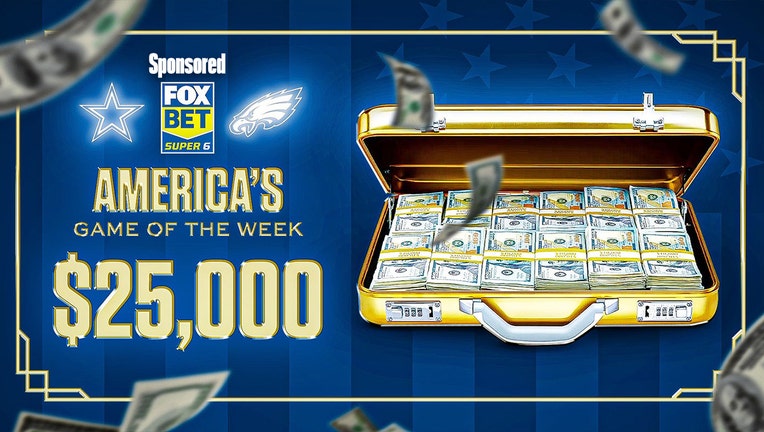 It's beginning to look a lot like America's Game of the Week on Christmas Eve will be must-see TV on FOX.

Even Santa will be glued to his screen watching this exciting Eagles vs. Cowboys showdown. Sorry, kids, but the toys will just have to wait.

These rivals have so much riding on this game — playoff seeding, a chance at owning the division for the Eagles and bragging rights. And now that Jalen Hurts' availability is in question (line is on the move) and the Cowboys are in desperate need of a get-right win, the theatrics have officially reached level 10.

The stakes are sky-high for the guys on the gridiron, so FOX Bet Super 6 is giving you a chance to get in on the action, too.

That's right — FOX Bet Super 6 has dedicated a very special contest just for this matchup, where you can win $25,000!

America's Game of the Week Challenge is a free-to-play contest in the FOX Bet Super 6 app where you pick six different outcomes from the marquee matchup between the Eagles and the Cowboys. From the team with the most tackles to the total points scored in the game, predict all six perfectly, and you could be on your way to a $25,000 payout.

All you have to do is download the FOX Bet Super 6 app on your phone or mobile device, open up the America's Game of the Week Challenge, make your picks and submit them before the game kicks off this Saturday.

It's free to play, it's fun and it's easy. And people really do win!

But before you head over to your FOX Bet Super 6 app to get in on the action, check out our predictions for this NFC East showdown!

America's Game of the Week: Eagles at Cowboys

When is the game?

Which team will have the most total tackles and how many will they have?

The Eagles and the Cowboys both boast top 10-ranked defenses so that just means that both squads have been on top of their tackle game this season. The Eagles, however, get the edge here because their defense ranks slightly above Big D's.

Which team will have the highest kick return average and what will the average be?

KaVontae Turpin has been electric for Dallas on kickoff returns this season. He has racked up 426 yards returning the ball for Big D, averaged 23.67 yards per return and has notched a 63-yarder. But Philly's Boston Scott is slightly better. He averages 28.08 yards and has posted a 66-yard return this year. Going with Philadelphia again in this category.

Which team will have the most rushing yards and how many will they have?

The running back tandem of Ezekiel Elliott and Tony Pollard has yielded success for the Cowboys this year. And even though the Eagles' 158.6 rushing yards per game is slightly better than Dallas' average of 145.1, Zeke and TP will give the Boys the leg up here.

Which team will have the longest punt and how many yards will it be?

Dallas punter Bryan Anger is punting an average of 48.8 yards per game and has posted an NFL season-high punt of 83 yards. Eagles' punter Arryn Siposs averages 45.6 yards, and his season-long is 59.

In Brian's punts, we trust.

Which team will have the longest field goal and how long will it be?

Excuse us for sounding like a broken record, but we're going Cowboys here, too. Dallas kicker Brett Maher has a 60-yard field goal under his belt this season. That's tied for the second-longest FG in the league. Eagles kicker Jake Elliott's longest this year has been a 54-yarder.

Which team will win and by how many points?

So much is riding on this massive NFC East matchup.

The Eagles can virtually taste the first-round bye. But the Cowboys need a bounce-back win after falling to the Jaguars in Week 15. And they also need the best seeding possible to increase their chances of being better than one-and-done in the playoffs.

Ultimately, it will be a tight one. But it will be the Eagles, with or without Jalen Hurts.

Now it's time for you to try your luck at winning $25K in America's Game of the Week Challenge.

Your Christmas miracle could be just a few clicks away!