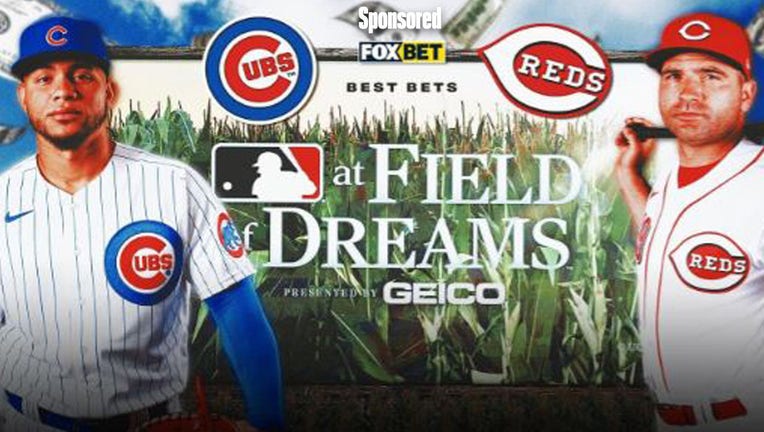 FOX Sports MLB Betting Analyst Edward Egros breaks down the Field of Dreams Game between the Cubs and Reds. Read for his analysis and best bet. (FOX Sports)

Class! It’s time to go on a field trip (pun intended). Our destination is Dyersville, Iowa, for the second annual Field of Dreams Game.

We get to relive the fanfare of the motion picture masterpiece by watching MLB stars dressed in throwback uniforms playing in the picturesque corn fields reminiscent of small-town living. The Chicago Cubs take on the Cincinnati Reds, with coverage of this extraordinary event beginning at 7:15 p.m. ET Thursday on FOX and the FOX Sports app.

When it comes to the big game, there are many ways to enjoy the modern-day benefits of the sport, like placing bets on FOX Bet!

Let’s start with what we do not know. Thursday marks the second major league game ever played at Field of Dreams. Therefore, we do not have a large enough sample size to determine how much of a ballpark adjustment we should make regarding whether we'll see more or fewer runs compared to other "typical" games.

However, the field dimensions suggest a hitter’s park: 335 feet down the lines, 380 feet to the power alleys and 400 feet to dead center. After all, the Yankees and White Sox combined for eight home runs and 17 runs scored last year (way over the total of 9.5), with six runs scored in the ninth inning against formidable closers.

However, this year does not feature big bombers like Aaron Judge or Tim Anderson. These offenses have not exactly crushed the ball this season. Not only do the Cubs and Reds rank 19th and 20th in home runs, respectively, their expected batting average (xBA) both rank in the bottom eight out of 30 ball clubs.

Normally, the next step should be to look at the difference between actual batting average and expected batting average to determine if an offense should enjoy positive regression or suffer a setback. The Cubs and Reds rank seventh and eighth from the bottom in BA – xBA, respectively, suggesting these offenses could take a step back in the future.

The weather must also be considered. The forecast calls for approximately 76 degrees at the first pitch, with the temperature eventually cooling to 69 degrees with a calm wind. Warmer climates are more conducive to hitting, and cooler temperatures give the edge to pitching. I lean pitching.

Next, let's look at the pitching matchup between Drew Smyly for the Cubs and Nick Lodolo for Cincinnati. Smyly relies primarily on three pitches — curveball, sinker and cutter. While the southpaw has had excellent results limiting hard contact and not walking hitters, he has had trouble limiting barrels (19th percentile). He also has a ground-ball rate that’s more than 43% and a lower strikeout rate (21st percentile). With that said, the Reds have not performed well against the curve, ranking 27th out of 30 teams, per FanGraphs Linear Weights. Cincinnati has been better against the sinker, but Smyly’s repertoire should be successful in this outing.

Lodolo will be more challenging to handicap. Not only is he a rookie, but he has appeared in just nine games this season. He currently has a 4.40 ERA with seven home runs allowed, which means the young player needs more time to improve. But Lodolo has been effectively predictable with his arsenal, throwing his sinker more than 57% of the time with an xBA of .259. He also boasts a strikeout rate in the 85th percentile. How does that impact this matchup? The Cubs rank 27th hitting sinkers, so Lodolo may very well be the right man for the job.

There’s one last thing to consider. Expected fielding independent pitching is a metric used to isolate the true outcomes pitchers are responsible for — strikeouts, walks, hit by pitch and home run rate. I isolated pitching staffs by relievers and can see the Reds have struggled with their bullpen this season. They rank 29th in xFIP (4.52). This trend might mean the Cubs must be patient before mounting their offense.

The temptation might be to assume there will be a lot of runs because of last year. But the pitching matchup, the offenses in this specific game and the weather all suggest that we will be treated to a pitchers' duel. This means I'm taking the under as my best bet. And if Chicago gets down early, another bet to make would be to live bet the Cubs moneyline. I see them making a comeback in the late innings and pulling this one out for the aforementioned reasons.

Is this heaven? No, it’s learning to bet on baseball. Which, honestly, is pretty dreamy.

PICK: Under 8.5 runs scored by both teams combined