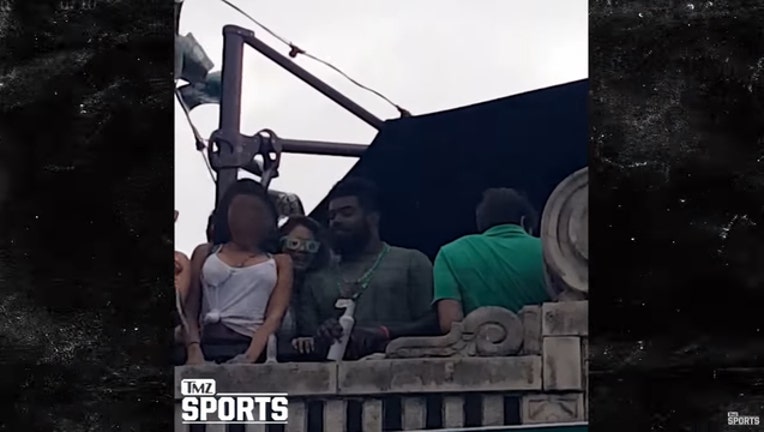 DALLAS - Dallas Cowboys running back Ezekiel Elliott enjoyed his weekend at the Dallas St. Patrick’s Day parade -- but now he's under the microscope for what he did at the Greenville Block Party.

TMZ shared video of Zeke pulling down a woman’s shirt and exposing her breast to a group of people from a rooftop bar on Greenville Avenue. In the video, the woman in a white shirt gestures to her chest and points at Zeke, who then reaches over and pulls down her shirt. A second clip shows her swat his hand away and then flashes the crowd.

From the video, it appears that the incident happened at Dodies at the corner of Greenville Ave. and Richmond Ave.

Elliott’s rep told TMZ it was all in good fun and she wasn’t upset. The rep also said the woman partied with Zeke and his friends.

"It depends on her," said Cowboys fan Reese Shirey. "If she wasn't ok with it, that's rude. Maybe she liked it or maybe not. I don't know."

Even though some fans aren't phased, especially given the intense party atmosphere, it's the NFL and his team that Zeke may have to worry about.

The NFL is still investigating Elliott because of an incident involving a woman in Ohio last July. He was cleared of domestic violence charges, but the NFL must still determine whether he violated the league's personal conduct policy.

Clarence Hill is the Cowboys beat writer for the Star Telegram.

"You want kids to have fun but understand who you are," Hill said. "And you are a target for attention and the Cowboys worry about. Well, these aren't a big deal right now. But when will it be a big deal? When will he cross the line?"

Josh Southard said Zeke was next door in the Blue Goose earlier that day. They had a good view of what unfolded later that day across the street.

"The people involved were kind of exposing themselves to the public the whole time from what my staff and other patrons were saying," he said. "So I don't think the snippet video you see captures the whole thing going on."

The Cowboys have not yet commented on the incident.