The Baltimore Ravens travel to Miami for a Thursday night game against the Dolphins on FOX.

MIAMI - If you’re a fan of offense, Thursday night’s game between the Miami Dolphins and Baltimore Ravens should have plenty of scoring to offer.

The Dolphins (2-7) and Ravens (6-2) have two of the poorest defenses in the NFL so far this season. But unlike the Dolphins, the Ravens have one of the most explosive offenses in the league.

Baltimore boasts the best rushing attack, eighth-best passing game, and rank seventh in scoring. Overall, the Ravens have the No. 2-ranked offense in the NFL.

It’s no secret quarterback Lamar Jackson has been key to their success. His 2,209 passing yards are ranked ninth in the NFL.

Along with his ability as a dynamic runner, the South Florida native has emerged as an early league MVP candidate. 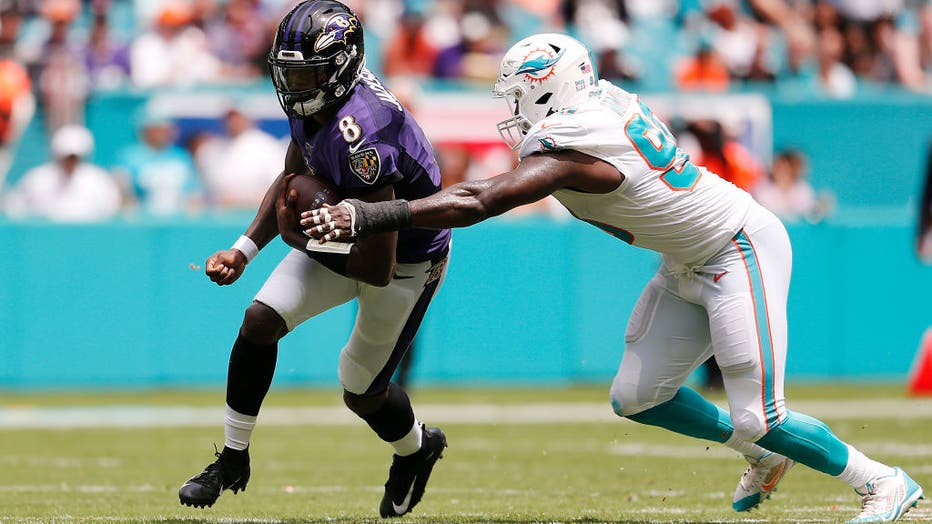 Lamar Jackson, No. 8 of the Baltimore Ravens, breaks a tackle from Charles Harris, No. 90 of the Miami Dolphins, at Hard Rock Stadium on Sept. 8, 2019, in Miami, Florida. (Photo by Michael Reaves/Getty Images)

Meanwhile, the Dolphins have struggled mightily on both sides of the ball. Miami’s offense and defense rank 30th in the NFL.

The Ravens defense is only the 23rd best, but the Dolphins’ offensive woes may present little challenge to that. Quarterback Tua Tagovailoa’s status is yet again in question, this time battling an injury to a finger on his throwing hand.

Jacoby Brissett could be asked to step in again. He has thrown most of Miami’s passes this season and did manage a 17-9 win over Houston last weekend.