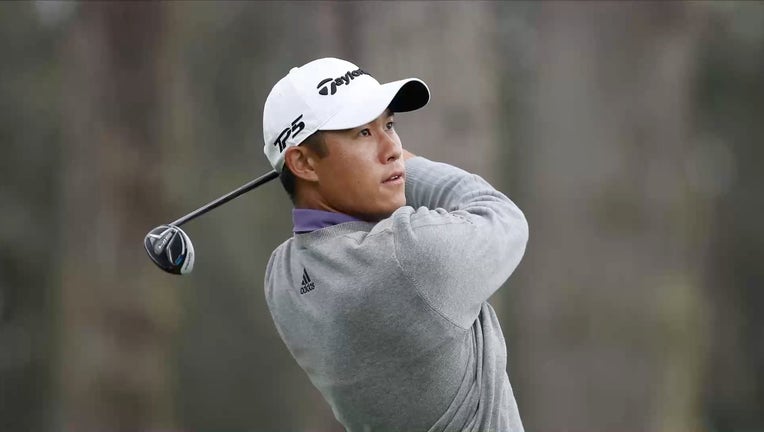 SAN FRANCISCO, CALIFORNIA - AUGUST 09: Collin Morikawa of the United States plays his shot from the eighth tee during the final round of the 2020 PGA Championship at TPC Harding Park on August 09, 2020 in San Francisco, California. (Photo by Sean M.

SAN FRANCISCO, Calif. - Collin Morikawa has won the PGA Championship in just his second appearance in a major.

The 23-year-old California native and Berkeley graduate shot 6-under 64 in the final round at TPC Harding Park to finish two strokes ahead of Paul Casey. He joins Rory McIlroy, Tiger Woods and Jack Nicklaus as 23-year-olds to win the PGA.

Morikawa chipped in from the fairway from 54 feet away on the 14th hole to break a logjam at 10 under. He then had an eagle on the par-4 16th when he drove the green and wound up just seven feet from the pin.

Morikawa has three victories in 29 career starts on the PGA Tour. He is the first player to win the PGA in his debut since Keegan Bradley in 2011.

Paul Casey was second, shooting a 4-under 66 on Sunday to finish at minus-11.

Collin Morikawa's 7-foot eagle putt gave him a two-shot lead heading into the homestretch of the PGA Championship.

Morikawa hit driver on the short par-4 16th hole, and watched as it bounced and headed straight toward the hole. That, plus a chip-in for birdie on the 14th, has put the 23-year-old on the cusp of his first major championship. He would be the first player to win the PGA in his debut since Keegan Bradley in 2011.

Paul Casey is the nearest threat, at 11 under. Jason Day and Matthew Wolff are both in the clubhouse at 10-under.

Paul Casey has pulled into a tie for the lead with Collin Morikawa at the PGA Championship.

Casey made birdie on the short par-4 16th to get to 11 under. He is seeking his first major championship in 64 tries. He is trying to become the first Englishman since Jim Barnes in 1919 to win the PGA.

Jason Day saved par from a greenside bunker to get into the clubhouse at 10 under, tied with Matthew Wolff, who shot 65.

Bryon DeChambeau and Tony Finau are still on the course, also within a shot of the lead.

Collin Morikawa chipped in for a birdie on the 14th hole to take the lead at the PGA Championship.

Morikawa was 4 under through 14 holes after holing his chip shot from 54 feet away. He's a 23-year-old California-Berkeley graduate and Pac-12 gold champion playing in familiar territory at the TPC Harding Park in San Francisco.

Six players were one stroke behind at 10 under for the tournament. Third-round leader Dustin Johnson and Scottie Scheffler were among those at 10 under and still on the course. Matthew Wolff was minus-5 for the final round and in the clubhouse at 10 under.

Dustin Johnson has made the turn in the final round of the PGA Championship with a share of the lead as he attempts to win his second major.

The 2016 U.S. Open champion was 1 under for the day, bringing him to minus-10 for the tournament. That left him in a tie atop the leaderboard with Paul Casey, Scottie Scheffler and Collin Morikawa.

Johnson started his day with a birdie on the first hole, but he gave that stroke back when he three-putted from 57 feet on the par-3 third. He recovered on the next hole to return to 10 under.

Three players were one stroke back and five others were at minus-8.

The PGA Championship is setting up for a wild final nine holes — or maybe more than that.

With the leaders approaching the turn, there's a three-way tie for the lead between Bryson DeChambeau, Cameron Champ and Dustin Johnson. They are at 10 under, and four players are one shot behind them; Collin Morikawa, Paul Casey, Scottie Scheffler and Matthew Wolff.

Wolff got into the thick of it with three birdies and an eagle from holes 7 through 10.

The PGA Championship uses a three-hole playoff in case of a tie.

Rory McIlroy is known to speak his mind. And he thinks Brooks Koepka has taken honesty to another level.

McIlroy says he was surprised when he heard Koepka say about Dustin Johnson that “he's only won one” major while sizing up his chances going into the final round. Koepka has four majors and was going for a third straight PGA Championship.

“If you’ve won a major championship, you’re a hell of a player,” McIlroy said. “Doesn’t mean you’ve only won one. You’ve won one, and you’ve had to do a lot of good things to do that.”

McIlroy then delivered his own zinger.

“Sort of hard to knock a guy that's got 21 wins on the PGA Tour, which is three times what Brooks has,” he said.

Koepka has seven PGA Tour victories, including his four majors.

As for McIlroy, he closed with a 2-under 68 and was at 2-under 278, no chance of winning. McIlroy had seven straight top 10s, including a victory, until golf was halted by the pandemic. When it resumed in June, he now has gone six straight tournaments without a top 10.

“I go out there and try my best every single day,” McIlroy said. “Some days I play better than others, and just got to keep going and keep persisting and see if you can do better the next time.”

Dustin Johnson and Scottie Scheffler each opened their rounds with birdies. That brought Johnson to 10 under, still one shot ahead of Scheffler.

Also off to a hot start are Tony Finau and Bryson DeChambeau. Playing in the fourth-to-last group, they each opened with a pair of birdies to get to 8 under.

Johnson is looking for his second major. He has taken the lead into the final round of three majors before but hasn't closed out any of them.

Brooks Koepka, in search of a PGA three-peat, had a bogey on No. 2 and is 6 under — four out of the lead.

Jordan Spieth, who played early and shot 67, said he wouldn't be surprised if someone shot a 30 on the back nine.

As if the final round of the PGA Championship didn't have enough possibilities, Jordan Spieth finished his final round at Harding Park and said the back nine was set up for good scoring.

Spieth said he wouldn't be surprised if someone shot a 30 on the back nine. He said except for the pin at the par-3 11th, most are in spots where birdies can be made.

Moments later, Byeong Hun An made a hole-in-one on No. 11. It was the first ace at a major in which no one cheered because no spectators are allowed.

Dustin Johnson goes into the final round with a one-shot lead, with 20 players separated by five shots.

As for Spieth? He closed with a 67, again finishing back in the pack. Since winning the third leg of the career Grand Slam at Royal Birkdale in the 2017 British Open, Spieth hasn't won any tournament. This is the third straight major he will finish at least 10 shots out of the lead.