The Kansas City Chiefs and Los Angeles Chargers will meet in the final Thursday Night Football game of the season.

LOS ANGELES - First place in the AFC West is on the line Thursday night when the Los Angeles Chargers take on the visiting Kansas City Chiefs.

The division rivals meet in FOX’s final Thursday Night Football game of the season inside of SoFi Stadium. The final Thursday night game will air next week on NFL Network.

The Chiefs (9-4) currently sit atop the division. And if fortune favors them Thursday night, they’ll extend their lead. 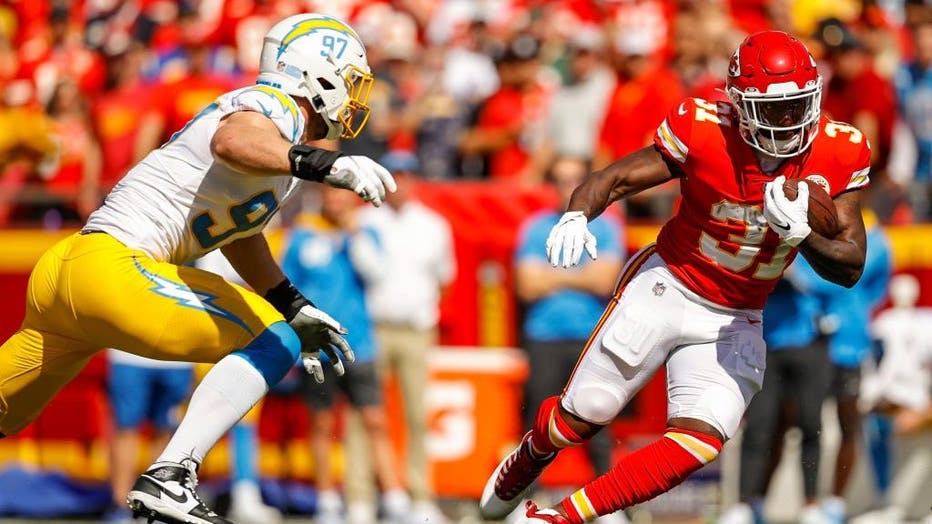 Darrel Williams, No. 31 of the Kansas City Chiefs, runs with the football during the first quarter away from Joey Bosa, No. 97 of the Los Angeles Chargers, at Arrowhead Stadium on Sept. 26, 2021 in Kansas City, Missouri. (Photo by David Eulitt/Getty

Kansas City has won its last six games and have appeared to regain championship form in that time span. The Chiefs’ fourth-ranked offense has been led by stellar play from quarterback Patrick Mahomes.

Often resembling a magician in the pocket, Mahomes has amassed 3,642 passing yards and 27 touchdowns with a 65.5% completion percentage this year. His Achilles heel, though, has been turnovers.

Defenders have intercepted Mahomes 12 times this season — a statistic the Chargers would be happy to add too with their fourth-ranked pass defense.

RELATED: 'ALL MADDEN': FOX's documentary on NFL legend to air on Christmas Day

Los Angeles (8-5) would take the division lead with a win and have defeated the Chiefs already this season. And with the sixth-best offense in the league, the Chargers could give Kansas City defenders fits Thursday night — specifically in the air.

Even so, he too has amassed double-digit interceptions — connecting with opposing players 11 times.