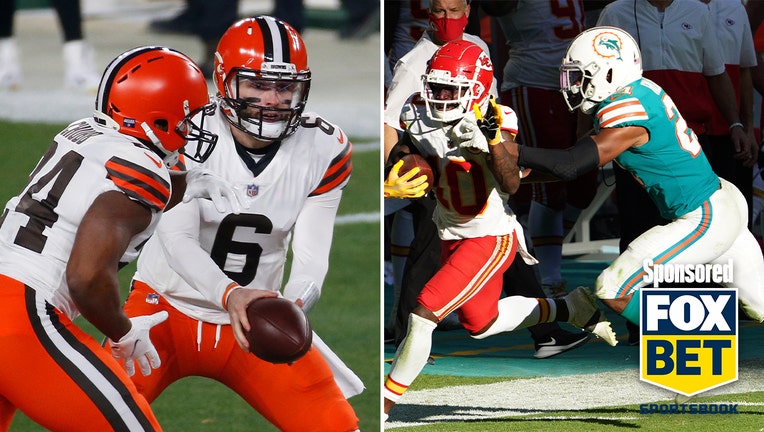 LEFT: Baker Mayfield #6 of the Cleveland Browns and Nick Chubb #24 in action against the Pittsburgh Steelers on January 11, 2021 at Heinz Field in Pittsburgh, Pennsylvania. (Photo by Justin K. Aller/Getty Images) RIGHT: Tyreek Hill #10 of the Kansas

There were horns blaring through northeast Ohio on Sunday night. Fans who had suffered through the humiliation of a move that was followed by 21 years of purgatory football were able to find a moment of heaven when they rode to the airport to greet their conquering heroes.

This was clearly the best moment that the Cleveland Browns had experienced in a long time- a rout of the Pittsburgh Steelers in the AFC Wild Card game.

The time for Cleveland’s sugar rush, however, must end quickly. Because what the Browns did was guarantee themselves a chance to move on to face the defending Super Bowl Champion Kansas City Chiefs- the top overall seed in the AFC- in the Divisional Round on Sunday at Arrowhead Stadium (3:30 p.m. ET, CBS).

Neither team is particularly good against the number. Kansas City is 7-9 due mainly to some inflated lines against them. Cleveland is 7-10 against the spread.

This is the first meeting between the two teams since 2018 in Cleveland. On that day, Mahomes threw for 375 yards and three touchdowns while Kareem Hunt rushed for 91 yards and two scores as Kansas City rolled to a 37-21 win at FirstEnergy Stadium. In the series, Kansas City has won three straight and holds a 13-11-2 mark in head to head matchups all time. This is the first playoff game between the two teams.

Cleveland is looking to win two playoff games in the same season for the first time since 1950.

It was a brilliant moment last week for the Browns, who went to Pittsburgh and stomped on the Steelers with a 48-37 romp that was highlighted by a 28-0 first quarter surge.  The Browns defense was exceptional, forcing five turnovers (four interceptions). Baker Mayfield- often gifted with short fields, threw for 263 yards and three touchdowns. Against Kansas City and to keep the high flying Chiefs offense on the sidelines, expect to see Nick Chubb and former Chiefs running back Kareem Hunt to play keepaway football – running a ground and pound attack likely to designed for ball control. Time of possession could be the most important stat of the game.

Yes, Kansas City is still the favorite to go to the Super Bowl out of the AFC. But there have been vulnerabilities even at 14-2. At times, the Chiefs have appeared outright bored when the starters played through the first 16 weeks. (Kansas City sat its starters against the Chargers in Week 17.) Through the first 12 weeks, the Chiefs turned the ball over 8 times. In the last four weeks, the Chiefs turned the ball over eight times. Still, Mahomes is a problem and the Browns matchup of trying to go speed-for-speed with Tyreke Hill, Mecole Hartman and the Chiefs wideouts. And then, there’s the Travis Kelce issue. Add it all together and it’s a big old headache for Cleveland.