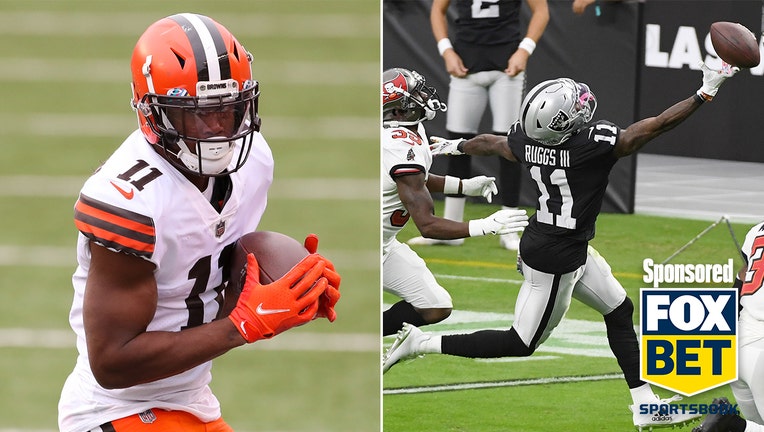 LEFT: Cleveland Browns wide receiver Donovan Peoples-Jones (11) carries the ball during the game against the Cleveland Browns and the Cincinnati Bengals on October 25, 2020, at Paul Brown Stadium in Cincinnati, OH. (Photo by Ian Johnson/Icon Sportswi

Part of life when you are a Cleveland Browns fan is to expect bad things to take place even when everything is going good.

And after an exhilarating win last weekend at Cincinnati in the “Battle of Ohio”, the Browns suffered a major loss when Odell Beckham Jr. was lost for the season with an torn anterior cruciate ligament.

Now, Cleveland has no time to dwell on its missing wide receiver as a very talented Las Vegas Raiders team rolls into FirstEnergy Stadium on Sunday afternoon (1 p.m., FOX) to face the Browns in a battle of potential AFC playoff teams.

There are a lot of interesting custom bets and BetBoost on FOXBet.com, such as a combination of Browns QB Baker Mayfield throwing three or more touchdown passes with a Browns win paying off at a +350 – meaning a $20 bet would pay $90.

The last time these two teams met up with in Week 4 back in 2018, when Raiders quarterback Derek Carr threw four touchdown passes while Matthew McCrane hit a 29 yard field goal in overtime to allow the then-Oakland Raiders to a 45-42 win. The Raiders have won two straight in the series and lead it overall 15-10, including two playoff wins in the 1980s.

In Cleveland, there are other weapons for Mayfield to try to use. Jarvis Landry is one of those- he leads the Browns with 29 receptions and 367 yards on the season. One thing that Cleveland may do is use Kareem Hunt more as a receiver out of the backfield, trying to stretch defenses that are sure to crowd the line without having to play back with Beckham’s speed. If you want a potential prop bet for a touchdown receiver for the Browns, don’t forget Donovan Peoples-Jones, who made the sprawling catch against Cincinnati to seal last week’s win. His prop for any touchdown in the game is +187 and for the first touchdown is +1400.

Meanwhile, it always appears that Carr is on the precipice of getting replaced every year under Raiders head coach Jon Gruden. However, his numbers so far (142-211, 1,726 yards, 13 touchdowns and 2 interceptions) are really good. The guy Las Vegas has to get going is Josh Jacobs, who has enjoyed flashes in his second year out of Alabama but has been hindered with a knee soreness that limits his touches. Still, a +550 bet on Jacobs- if he’s active- as the first touchdown scorer is not a bad bet at all.

Place a wager on the action with a bet with FOX Bet – the best place to find the latest odds, prop bets and bet boosts. Check it out now for special promotions when you open an account. FOX Bet is available in Pennsylvania, New Jersey and Colorado through the FOX Bet app and online at FOXBet.com.