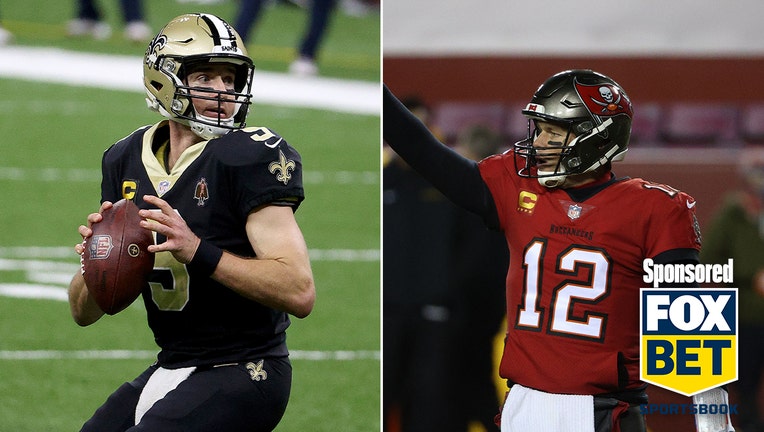 LEFT: Drew Brees #9 of the New Orleans Saints looks to throw a pass against the Chicago Bears during the fourth quarter in the NFC Wild Card Playoff game at Mercedes Benz Superdome on January 10, 2021 in New Orleans, Louisiana. (Photo by Chris Grayth

There haven’t been a ton of matchups over the years they have dominated the NFL. One was locked in the AFC’s power base in Foxboro. The other played the best years of his career in the NFC hamlet of New Orleans.

Still, Tom Brady and Drew Brees will always be linked because of their era. Brady for his championship prowess. Brees for his individual greatness and reviving an otherwise lifeless franchise.

And that’s why Sunday’s final meeting of the 2020 season between the two- likely the final one of their careers as Brees reportedly heads towards an off-season retirement- is a special one. Because it could be the last time the two will be in the same place at the same time before their busts end up in the Hall of Fame in Canton, Ohio.

That’s one of the spicy subplots as Brady’s Tampa Bay Buccaneers head to the Superdome to face Brees’ and the New Orleans Saints Sunday night (6:40 p.m., FOX) in the NFC Divisional round.

It has been all Saints, all the time both this year and in recent years. New Orleans has won the last five games between the two teams by an average score of 33-16.2. The last contest was the low point of the Bucs season- a 38-3 thumping at home on Nov. 8 that saw the Saints defense hold the Bucs offense to 194 yards.

The Buccaneers were not especially sharp in their 31-23 win over Washington last week in the wild-card round. Defensively, they seemed flustered by Taylor Heinicke and allowed 383 yards of total offense to a Washington squad that doesn’t come close to matching the firepower of New Orleans. Still, they were able to hit on big plays offensively thanks to the passing game that Brady had cranking for 381 yards and two touchdowns. The wild card in this could be Leonard Fournette, who rushed for 93 yards and a touchdown.

It took a bit for the Saints offense to get going, but New Orleans has defense that can shut down anyone during a 21-9 win over Chicago last week. Brees was sharp with 265 yards and two touchdown passes. The main thing that New Orleans has to avoid, however, is the sluggish stretches of games that have taken place later in the season. The losses to the Raiders, Eagles and Chiefs showed that point. Even in the win over the Bears, the Saints let a mediocre team hang around for too long. If they are flat for any period of time this week, the Saints will be going home and Brees’ career will likely be over.