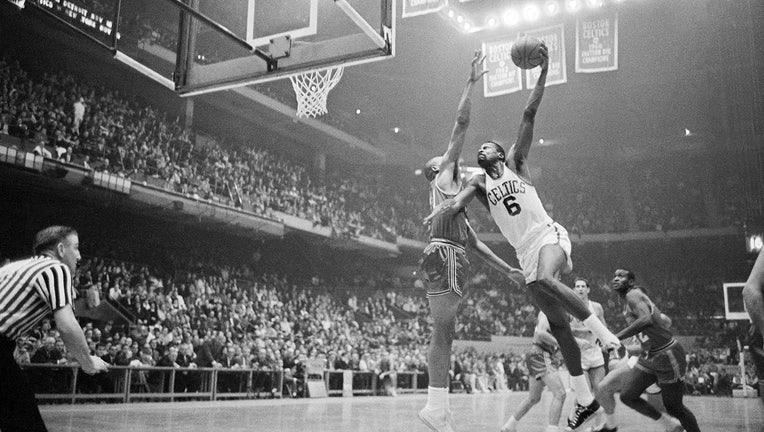 The Boston Celtics' Bill Russell, (R) goes in high to score as St. Louis Hawk's Zelmo Beaty, (L) tries to block the attempt in a 2nd person action at the Boston Garden in this 1963 photograph. Celtics won the game with 116-110.

Bill Russell's No. 6 jersey is being retired across the NBA, a first for the league.

The NBA and the National Basketball Players Association announced Thursday that the number worn by the 11-time champion, civil rights activist and person good enough to be enshrined in the Basketball Hall of Fame as both a player and a coach was being permanently retired by all 30 teams.

"Bill Russell’s unparalleled success on the court and pioneering civil rights activism deserve to be honored in a unique and historic way," NBA Commissioner Adam Silver said. "Permanently retiring his No. 6 across every NBA team ensures that Bill’s transcendent career will always be recognized."

Players who currently wear No. 6 — including the Los Angeles Lakers' LeBron James — may continue doing so. But the number cannot be issued again, the league said.

All NBA players will wear a patch on the right shoulder of their jerseys this season, the league said, and every NBA court will display a clover-shaped logo with the No. 6 on the sideline near the scorer’s table.

The Boston Celtics have "separate and unique recognition for him on their uniforms" planned, the NBA said.

Russell died on July 31 at the age of 88. He was the most prolific winner in NBA history, an 11-time champion during a 13-year career — winning the last two of those titles as a player-coach — and the first Black coach in any of the major U.S. pro sports to win a championship.

He marched with Martin Luther King Jr., stood with Muhammad Ali and received the Presidential Medal of Freedom from President Barack Obama.

And having his number retired leaguewide puts him in a very exclusive club. 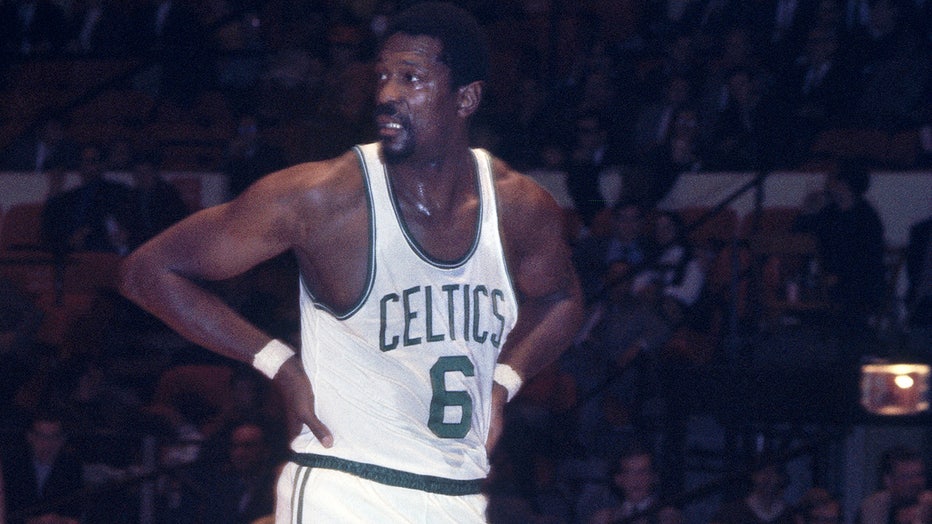 Center Bill Russell #6 stands on the court during a game at the Boston Garden circa 1960's in Boston, Massachusetts. (Photo by Focus on Sport via Getty Images)

Major League Baseball permanently retired No. 42 — in honor of Jackie Robinson, who broke the big league’s color barrier — with the understanding that those who were wearing that number could continue to do so. Mariano Rivera of the New York Yankees was the last in the majors to wear No. 42, doing so through his final season in 2013.

The NHL, upon Wayne Gretzky’s retirement in 1999, said his No. 99 would be retired leaguewide in honor of that sport’s all-time scoring leader.

And now, Russell gets the same treatment. It also seems fitting that he and Robinson — both barrier-breakers — are linked again. Russell called Robinson a hero, once saying that "he showed me the way to be a man in professional sports."

Robinson, clearly, held Russell in high esteem as well. Rachel Robinson, his widow, asked Russell to be a pallbearer at her husband’s funeral in 1972.

"This is a momentous honor reserved for one of the greatest champions to ever play the game," NBPA Executive Director Tamika Tremaglio said. "Bill’s actions on and off the court throughout the course of his life helped to shape generations of players for the better and for that, we are forever grateful. We are proud to continue the celebration of his life and legacy alongside the league."

There have been more than 250 players in NBA history to wear a No. 6 jersey, including 24 who did so in at least one game last season — most notably, James, who has alternated between 6 and 23 throughout his NBA career.

Russell is one of 12 players currently enshrined in the Basketball Hall of Fame who wore No. 6 at at least some point in their careers. The others: Julius Erving, Patrick Ewing, Ben Wallace, Don Barksdale, Chuck Cooper, Larry Costello, Tom Gola, Cliff Hagan, Alex Hannum, Buddy Jeanette and Neil Johnston.