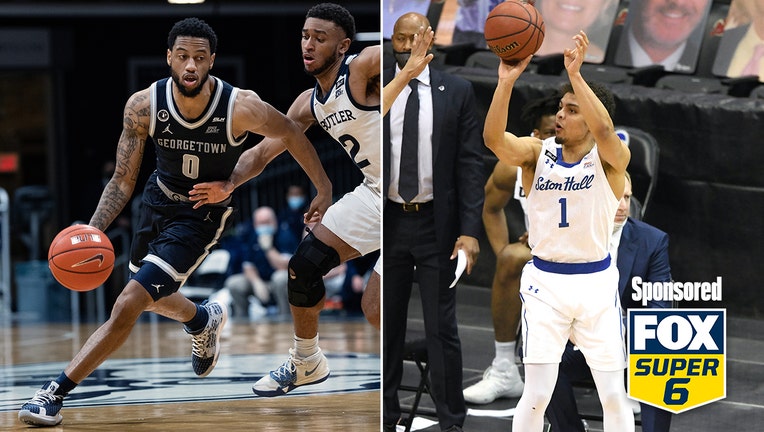 Looking strictly at seedings in a post-season conference tournament can be a dangerous proposition. The number next to a team’s name doesn’t always factor in how teams are playing at the moment they arrive at the location site.

With that said, the Big East tournament will see a semifinal doubleheader on Friday night where the two best teams in the conference in recent weeks – Creighton and Connecticut – will square off in the nightcap (9 p.m., FS1). Meanwhile, the two teams that entered New York needing some work for their NCAA hopes – Georgetown and Seton Hall – will battle for a shot in Saturday’s conference final in the opener.

There are few better evenings in the sport than semifinal night at Madison Square Garden. And when you watch the Big East semifinal doubleheader on FS1, you can get into the action by playing FOX Super 6 for your chance to win $1,000 on the Big East Tournament!

All you have to do is download the FOX Super 6 app and answer six questions about each day of the conference tournament – all absolutely for free.

To get you in the spirit for FOX Super 6, here are six observations about Friday’s Big East semifinals.

1. The return of Hoya Paranoia?

Patrick Ewing is the symbol of what Georgetown’s dominance in its Camelot days of the early 1980s under John Thompson. Now, as head coach, what Ewing is trying to do is simple – return a little bit of the swagger along with a fundamental approach that made Georgetown so feared at the Garden in March.

The Hoyas destroyed Marquette on the boards in Wednesday’s opener by a 46-32 margin, then followed on Thursday with a +7 on the glass against Villanova. When you combined that with the first perfect day at the foul line in Big East tournament history — 23-for-23 at the stripe — you have the recipe for an eight seed to trip up the top team in the conference.

Dante Harris had 18 points on Thursday, while Qudus Wahab followed him with 17 points and six boards. If they lose on Friday night, Georgetown will go home and miss the postseason. However, a win gives them legitimate traction on the rebuild back.

2. Is Seton Hall in the tournament yet?

Edging out St. John’s in overtime on Thursday did the job for the moment for the Pirates, who were hanging onto tournament hopes by a thread. However, the new and unexpected wrinkle for the Hall is the fact that it isn’t Villanova — a consensus Top 15 team by most metrics coming into the week — awaiting them to bolster the resume with a victory on Friday night.

So will the committee look at a win over Georgetown as enough for the Pirates to go dancing? That may be unanswerable right now. Still, the Pirates will likely need to do better than the 15 turnovers they committed on Thursday to get past the Hoyas.

In this spot on Thursday, we talked about how the Big East has lately been won by the teams who are able to shoot the 3. Georgetown and Seton Hall could play an old fashion, forward-oriented game thanks in large part to the massive presence of Seton Hall’s Sandro Mamukelashvili and Georgetown’s Wahab, who has been outstanding in the first two games of the tournament.

With all due respect to the Hoyas and Pirates, they are the undercard on Friday night. The main event is Creighton – who could be playing their way to a third or fourth seed in the NCAA’s – and Connecticut, who has won seven out of eight since Valentine’s Day weekend and blitzed DePaul in Thursday’s nightcap.

The winner of this game not only is the favorite to win this tournament, but they also become a fashionable pick to made some serious NCAA waves.

Marcus Zegarowski and Damien Jefferson turned the lights out on Butler with a huge scoring burst during the 87-56 trouncing of the Bulldogs Thursday night. Zegarowski showed his worthiness of a first-team All-Big East honor with a 4-for-5 night from beyond the 3-point line.

Now, can Creighton keep it up against the Huskies?

What has made UConn’s late-season run so eye-opening is that they are not just winning games – they are destroying teams. The average margin of their last six wins before DePaul on Thursday night was 13 points, and it is multiple players also who are stepping up, led by James Bouknight and Isaiah Whaley.

Against Creighton, the Huskies might need every bit of that depth.

Play the FOX Super 6 Challenge for college basketball throughout the conference tournaments and March Madness for your chance to win thousands of dollars, absolutely for free. Just download the FOX Super 6 app now, and make your picks!