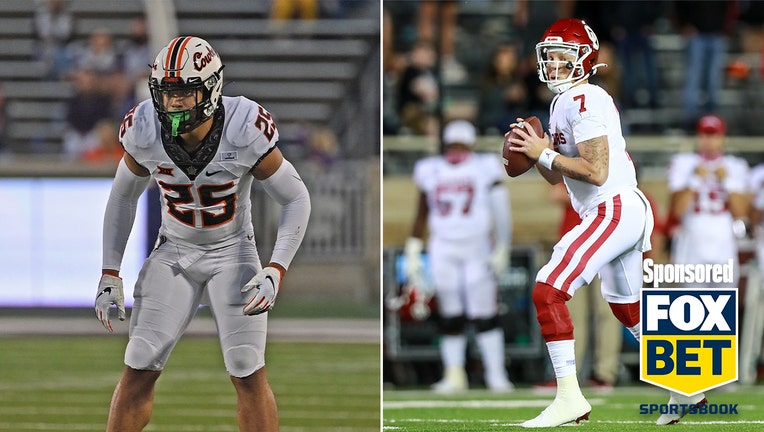 LEFT: Safety Jason Taylor II #25 of the Oklahoma State Cowboys gets set on defense during the second half against the Kansas State Wildcats at Bill Snyder Family Football Stadium on November 7, 2020 in Manhattan, Kansas. (Photo by Peter G. Aiken/Gett

In a normal college football season, the 10 days around Thanksgiving weekend are normally the time when old rivals get together and settle their scores.

So in this time of the abnormal year- when some leagues are still struggling to get off the ground and others are seeing their rivalry clashes either pushed towards the holiday season or scrapped all together- it is nice to see a familiar case of “Bedlam.”

The Oklahoma-Oklahoma State series certainly has brought a litany of memorable characters and contest to the equation. And when the 17th ranked Sooners host the 14th ranked Cowboys in Norman on Saturday night (7:30 p.m., ABC) in the Big XII’s game of the season, it is sure to bring another one to the forefront. And it could decide who has the inside track to appear in the Big XII title game in Arlington, Tx. in December.

The sports betting information
On FOXBet.com Sportsbook, the Sooners were listed as 7 point favorites over the Cowboys as of Tuesday evening. afternoon. On the money line, Oklahoma is -250 (a $250 bet would pay $100) while Oklahoma State was +210 (a $100 bet would pay off with a $210 win.) The over/under total on this game over 59 1/2 points, a low total for the normally high flying Big XII.

The history
Oklahoma has dominated the series with an 89-18-7 advantage dating back to 1904.  The Sooners have a five game winning streak and won last year’s game in Stillwater, 34-16. Oklahoma has won eight of the last 10 and 16 of the last 18 dating back to 2002. Eight times since 2000, however, the game has been decided by less than double digits.

The storylines to watch
Oklahoma State has lived on the edge and that continued two weeks ago with a 20-18 win over Kansas State that saw the Cowboys offense stall with just 256 yards of total offense. It was the Oklahoma State defense forcing two turnovers that ended up being huge, including Jason Taylor’s 85 yard fumble recovery for a touchdown that proved to be the game winner. The Cowboys are balanced offensively- 220.5 yards in the air, 190.5 on the ground per game on average- and they defy the logic of the Big XII that you have to score 50 to win, with the defense holding opponents to 17.8 points per game through the first six weeks. Having that continue against Oklahoma, however, could be more difficult.

That’s because the Sooners are the same type of team we’ve seen under Lincoln Riley- big time offense that overwhelms opponents. Two straight 62 point performances against Kansas and Texas Tech highlights that for Oklahoma, who has won four straight since a 37-30 loss to Iowa State back on Oct. 3. Quarterback Spencer Rattler has found a groove, throwing for 18 touchdowns and 6 interceptions in seven games and compiling over 2,000 yards passing. T.J. Pledger has five rushing touchdowns and is averaging 4.9 yards per carry for the Sooners as well.