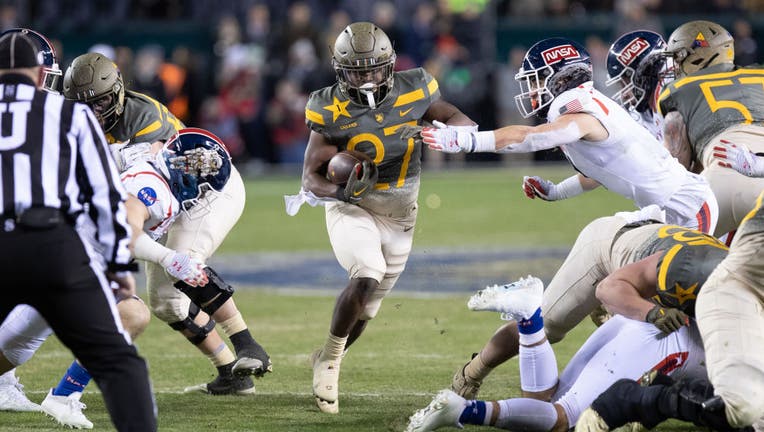 Markel Johnson of the Army Black Knights runs for a touchdown against the Navy Midshipmen at Lincoln Financial Field on December 10, 2022 in Philadelphia, Pennsylvania. (Photo by Edward Diller/Getty Images)

PHILADELPHIA - Navy’s Anton Hall Jr. lost a fumble at the goal line in the second overtime that helped set up Quinn Maretzki's game-winning 39-yard field goal as Army beat The Midshipmen 20-17 on Saturday night in the first OT game in the 123 games of the rivalry series.

There wasn't much offense throughout the game until the waning moments of regulation when Maretzki kicked a 37-yarder with 1:53 left to tie the game at 10-all.

The NCAA instituted overtime in 1996, and the series had never had to go a little extra to settle one of the sport's greatest rivalry games.

Army’s Markel Johnson ran 25 yards for a touchdown on the first play of overtime for a 17-10 lead, and Navy matched the Black Knights when Xavier Arline tossed a 25-yard touchdown pass to Maquel Haywood that made it 17-all.

It was Navy’s first completion of the game and Arline had perhaps the sweetest 1 of 1 for 25-yard game in Navy history. He also rushed for 102 yards.

Hall -- who earlier raced 77 yards for a TD -- coughed up the ball as he plunged toward the end zone and stood crestfallen after the game at Lincoln Financial Field as fireworks went off.

Navy still leads the series against Army 62-54-7. The Black Knights, though, have won five of the last seven meetings.

The teams combined for only 53 yards passing.

One of Cade Ballard’s rare passing attempts for Army was a success when a pass interference call brought the ball down to the 28 with 4 minutes left on a drive that set up Maretzki’s tying field goal.

Hall’s run up the middle in the third quarter was the biggest burst of offense of the game for either team -- at that point, that run alone had outgained Army’s 69 total yards.

His run was a double gut punch to the Black Knights after QB Tyhier Tyler had a 40-yard touchdown run wiped out on a penalty on the previous possession.

Hall provided one of the few highlights in a game full of wobbly punts, errant throws and a dearth of first downs.

The first spark came in the final seconds of the first half when Army’s Noah Short blocked Riley Riethaman’s punt and Jabril Williams recovered -- after almost knocking the ball out of the end zone -- for the touchdown and a 7-3 lead.

That bit of excitement in front of a packed house of 69,117 at the Linc just about made up for 29 minutes of two offenses that could not move the ball down field.

The first half ended with 0 passing yards. From both teams. Zero.

That stat of futility wasn’t necessarily uncommon for either program. Navy won two games this season without completing a pass, and Army threw for 852 yards passing — this season. That’s about 2½ games of yardage on the same field for Philadelphia Eagles QB Jalen Hurts.

With points at a premium, Navy sent out Bijan Nichols for a long field goal, and his 44-yarder hugged the inside of the right goal post for a 3-0 lead in the second quarter.

Army finished the half 0-for-5 passing, failed to convert on 5 of 6 third downs and had 33 total yards in the half.

This game is rarely about quality football anyway and more about the pageantry and revelry of cadets and midshipmen standing, bouncing and cheering for their branch. Billed as "America’s Game," the hours before kickoff were highlighted by the Army Corps of Cadets and the Brigade of Midshipmen march onto the field. The Navy "Leap Frogs" parachute team earned a roar from the crowd with each safe landing on the field.

Mark Wahlberg even made an appearance and leaped into a crowd of midshipmen and then received an award for his work with the military.

Navy fell to 11-3 against the Black Knights at Linc. It was the 90th time the game was played in Philadelphia, including 38 straight times from 1945 to 1982.

The series is hitting the road starting with next season’s game in Foxboro, Massachusetts. The 2024 game is at FedEx Field in Landover, Maryland; 2025 is at M&T Bank Stadium in Baltimore; and 2026 is at MetLife Stadium, the New Jersey home of the Jets and Giants just outside New York City. The game returns to Philly in 2027.