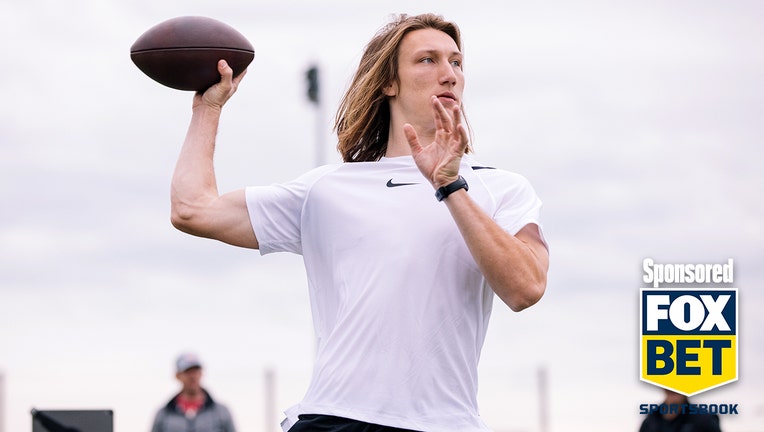 Our friends at FOX Bet are offering hundreds of draft betting markets, and some of the wagers are way past the point of ridiculousness. For example, you have to risk $10,000 to win $100 that Trevor Lawrence goes first overall to the Jacksonville Jaguars.

Thanks, but no thanks.

Bookmakers are pretty bullish with their prices on Lawrence going No. 1 and Zach Wilson being taken by the New York Jets at No. 2. The guessing game begins with the San Francisco 49ers and the third overall pick.

Because the draft betting markets tend to swing drastically based on the news du jour, the volatility can be pretty serious. FOX Bet’s market on which player gets drafted third has been a damn roller coaster. Mac Jones (-188 at FOX Bet) is still the favorite, followed by Trey Lance (+125) and Justin Fields (+300).

"The numbers are moving constantly," FOX Bet content integration specialist Jacob Blangsted-Barnor told me. "Last week, we felt like Justin Fields was the pick at three, but we were taking so much money on Mac Jones that we had to move his number down.

"It becomes even more compelling because it’s the Niners. We’ve seen in the Shanahan-Lynch era that they don’t really leak anything to anyone. Nobody had them taking Brandon Aiyuk last year, so they’ve been known to surprise.

"There is no mathematical model that tells us who goes where. Two days ago, I saw a report that San Francisco had decided, and nobody outside of Shanahan and Lynch knew. Today, you see the report that they’re deciding between Trey Lance and Mac Jones.

"We never know what to believe when it comes to the Niners organization, so we have to move off the money."

How much more will FOX Bet adjust the odds on the third pick?

"As many times as we have to," JBB said after a chuckle. "The odds have been all over the place. The Lance (+125 at FOX Bet) and Fields (+300 at FOX Bet) numbers were the other way around, and we flipped them overnight [after the Rapoport report].

"But things are changing constantly. I think Jones stays the favorite, but it only takes one source or quotation before Lance is suddenly the favorite."

My favorite way to bet the NFL Draft is via the player draft position markets. Sportsbooks give you a tangible number, such as 11.5, to go "Over" or "Under" where a player will be selected. If the player is picked in slots 1-11, the "Under" wins, whereas 12-plus is a win for the "Over."

I made my first wager on this draft — on Mac Jones Under 17.5 — in early March. That should be an easy winner, considering his draft position prop is 3.5 right now, but don’t worry, I still really like a few other props at their current prices.

Fields is sliding fast, and sportsbooks are paying attention. Fields’ draft position is O/U 4.5 at FOX Bet, but the "Over" juice has moved from +100 to -200 in the past 12 hours. I don’t love laying two to win one, but I don’t see him going in the top four. And this prop could very easily move to 5.5 soon.

Jaycee Horn’s market has dipped a little, but I’m a big fan of him going Under 12.5 (-105) at FOX Bet. There’s a real good chance the Cowboys pluck him at 10, and I don’t see him slipping past the Eagles at 12. Their secondary has been a mess, and it would be hard for Philly to pass on Horn or Patrick Surtain.

Believe it or not, bookmakers can be way off on these props.

"I was talking to one of our main draft traders, and he admitted that we were off on DeVonta Smith from the beginning," JBB said. "Smith’s number has gone so far the other way. It was 5.5, and it’s all the way up to 11.5 right now. Ja’Marr Chase is the big favorite to be the first receiver taken, and Smith is looking like he’ll be third behind Chase and Waddle.

"Micah Parsons is another one that is sliding quite a bit," JBB added. "Many people saw him as a top-eight draft pick, but now we’ve got his draft position at 12.5. All the quarterbacks and trendy receivers could push him way out."

Another really neat betting market that’s picking up a lot of steam is whether a team will draft offense or defense with its first pick. Bookmakers have more freedom to take a stance with these odds because there’s no exact science.

"Those markets come down to a mixture of draft needs, credible reports and mock drafts," JBB explained. "It’s very tough for a team like the Rams because they don’t have a first-round pick. We know what teams in the early first round, like the Jets and Niners, are going to do and what side of the ball they’re going to draft.

"There’s a pretty good idea who will be on the board for the top five and top 10 picks. After that, it’s a guessing game. The further you go along, the more things can change and more surprises there could be."

Naturally, this market can be affected drastically by a big trade. Kansas City was around -300 to go offense first, then the Chiefs made a huge splash by acquiring Pro Bowl tackle Orlando Brown. The number moved from -300 to -167 at FOX Bet.

"Kansas City’s market was very heavy to the offense," JBB recalled. "The idea was that the Chiefs were going to draft a lineman to protect Patrick Mahomes. Then they went out and suddenly traded for Orlando Brown. Now the whole draft outlook has changed, and they can go in a different direction. We had to adjust their price."

The oddsmaking and number crunching don’t end for the bookmakers once the draft is over. If anything, there’s more work to be done to create more markets for you to bet on.

"As soon as the draft is done, we immediately start on the next season," JBB said. "We’ll have the offensive and defensive Rookie of the Year markets up. We’ll put up passing yards for players like Lawrence and Wilson. We’re trying to create something topical based off what has just happened.

"A few weeks after the draft, we’ll have the schedule released. That’s the final big milestone that will impact all our season-long stuff. From that point forward, we’ll be focused on fine-tuning our win totals and playoff markets. Then we’ll branch out into the exotics, like which teams will get a first-round bye and things like that. The list is endless, really."