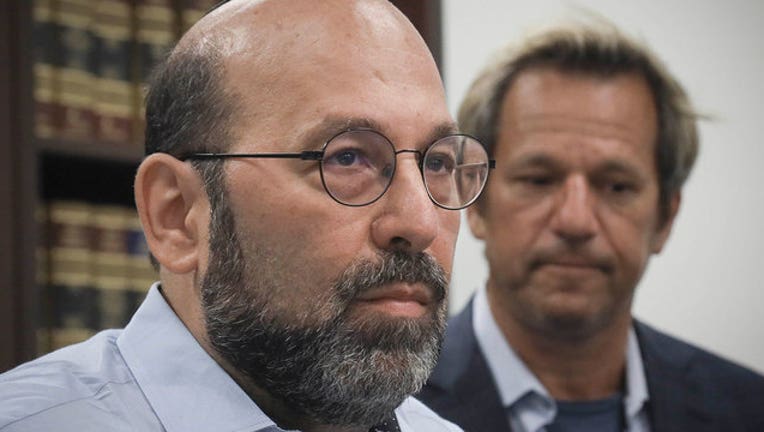 NEW YORK (AP) - Thirty-eight former students of an Orthodox Jewish school in New York City operated by Yeshiva University sued Thursday over claims they were molested by two prominent rabbis in the 1960s, '70s and '80s.

The suit, filed in state Supreme Court in Manhattan, alleges that the university failed to protect students at Yeshiva University High School for Boys and promoted one of the rabbis to principal even after receiving abuse reports.

The lawsuit is one of hundreds that have been filed over child sexual abuse allegations since last week, when New York state opened a one-year window for suits previously barred by the state's statute of limitations.

During a news conference Thursday, three of the alleged victims, flanked by their lawyers, spoke about disturbing behavior they say went on for decades.

"I didn't even understand at the time that this was sexual abuse; I just knew that this guy was putting his hands all over me," said Barry Singer, 61, speaking of one of the rabbis he said kept reaching into the boy's pants, even in school hallways.

The Associated Press doesn't typically identify people who say they are victims of sexual abuse unless they choose to be named.

One of the accused rabbis, George Finkelstein, targeted children of Holocaust survivors, according to the lawsuit, telling them they would increase their parents' suffering if they spoke about the abuse. The other, Rabbi Macy Gordon, who taught Jewish studies, allegedly sodomized boys in a "vicious and sadistic" manner using objects, the lawsuit says. Gordon died in 2017 in Israel. Both he and Finkelstein have denied the allegations in the past.

Finkelstein was promoted from the school's assistant principal to principal even after some of the boys' parents reported the alleged abuse to school officials, the plaintiffs said. He eventually moved to Israel, where he worked at Jerusalem's Great Synagogue. Calls to the synagogue rang unanswered Thursday.

Thirty-four of the plaintiffs attempted to sue Yeshiva University for sexual abuse and facilitating sexual abuse in 2013 but the case went nowhere because it was barred by the statute of limitations at the time. On Thursday, one of their attorneys, Kevin Mulhearn, called the plaintiffs "trailblazers."

David Bressler, 51, said the abuse he suffered while a student in the early '80s led him to abandon his religion that now rekindles memories of the abuse. He has no contact with his parents and other relatives who are observant Jews. When he married his Jewish wife a decade ago, he made her promise not to raise their children in the Jewish faith.

He said he still doesn't tuck in his shirt, a habit he started in high school to make it more difficult for his abuser to put his hand down his pants. Bressler once punched Finkelstein while he says the rabbi was sexually "wrestling" with him.

Now there are days he can't bear being on a crowded subway because "I can't stand being touched by people."

"So you don't even realize what the long-term impact is," said Bressler, a father of two.

Yeshiva University, which calls itself "the world's premier Jewish institution for higher learning," has trained both secular and religious leaders for the past century. With four campuses in Manhattan, the university operates the Albert Einstein College of Medicine, the Benjamin Cardozo School of Law and other schools that attract a mix of Jewish and non-Jewish students.

The high school, also known as the Marsha Stern Talmudical Academy, has taught boys since 1916. It's considered the first academic Jewish high school in the U.S. and the first to offer both Jewish and secular studies.