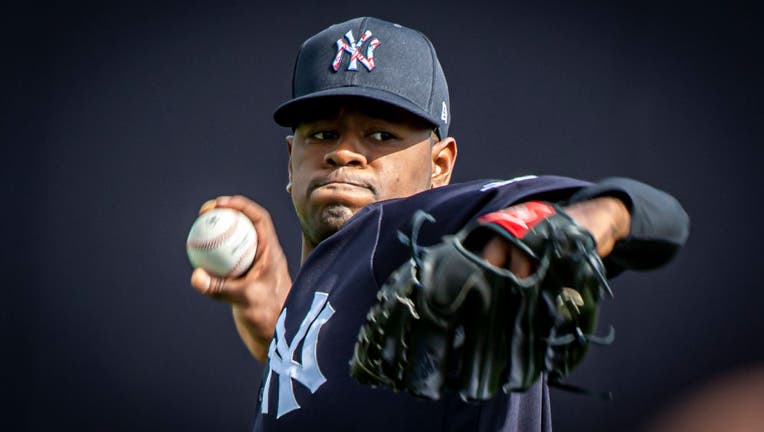 TAMPA, Fla. (AP) — New York Yankees right-hander Luis Severino says it is "definitely frustrating" to be shut down in spring training for the second consecutive year.

Severino has right forearm soreness near the elbow, which has been an off and on issue since October.

"It’s more inside, close to the bone, so I would say more like where the muscle attaches to the bone," Severino said Friday. "It’s a weird spot. I’ve never experienced pain up there."

Severino will go to New York on Monday for tests. He was examined Friday by team physician Dr. Christopher Ahmad.

“We took a couple of issues off the board, I would say shoulder or stuff like muscles, but we will see on Monday what is the real issue, or the days after that” Severino said. “We’re looking to get all the answers that we can get.”

"I went to, in the offseason, New York twice to do the MRI and they didn’t find anything so right now we’re not sure what is causing that." Severino said. "I was watching TV, I started to stand up and I was feeling something that wasn’t right."

Severino, who turned 26 on Thursday, was sidelined until the final weeks of the regular season last year.

Severino also has a loose body in his right elbow that manager Aaron Boone said has not been an issue.

"I don’t think that’s the issue because if it was the issue, I couldn’t throw my fastball or my slider," Severino said.

Severino had been throwing bullpen sessions during spring training without using a changeup. He resumed throwing his changeup on flat ground in recent days.

New York already expects to be without left-hander James Paxton for the first two months of the season following back surgery on Feb. 5.

It's not clear whether Severino will be ready for the March 26 opener at Baltimore.

Severino first felt the soreness in the days after his Game 3 start against Houston in the AL Championship Series on Oct. 15. He would have pitched Game 7 but the Astros won the series in six games.

Severino had an MRI in New York in early December and was cleared to start his throwing program. He experienced discomfort while throwing his changeup on flat ground in January in the Dominican Republic. He returned to New York, and another MRI and CT scan were negative.