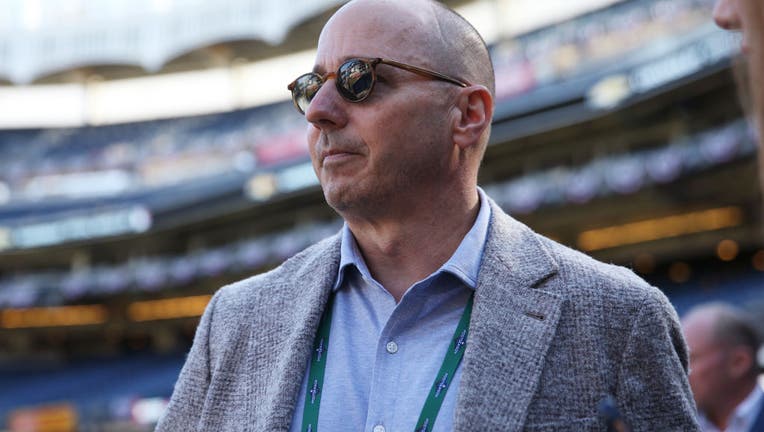 BRONX, NY - OCTOBER 15: New York Yankees General Manager Brian Cashman looks on prior to Game 3 of the ALCS between the Houston Astros and the New York Yankees at Yankee Stadium on Tuesday, October 15, 2019 in the Bronx borough of New York City. (Pho

"I'll acknowlege at that we had many a conversion with Major League Baseball the last number of years about suspicions, but having suspicions and being able to prove it are two different things," Cashman said Friday.

Cashman also talked with other teams regarding the matter. Manfred recently disciplined the Astros after he agreed the team broke rules by using electronics to steal signs during 2017 and 2018. Houston manager AJ Hinch and GM Jeff Luhnow were given one-year suspensions by Manfred and were then fired by Astros owner Jim Crane. Boston manager Alex Cora and New York Mets skipper Carlos Beltrán also lost their jobs. Cora was a coach and Beltrán played for the 2017 Astros in his final season as a player.

Beltrán was a Yankees' special adviser last season, and among those Cashman talked with about the Astros' situation.

"We've asked so many people, Carlos included, because there's been a lot of suspicion with the Houston Astros and what happened in ‘17," Cashman said. "And anybody that has been a part of that has kind of avoided answering the questions. Never got confirmation of anything from any of them. "

Cashman wouldn't say whether he would consider rehiring Beltrán.

"That's not something for me to discuss at all at this stage," he said.

The scandal began when former Astros pitcher Mike Fiers, now with Oakland, revealed the scheme to The Athletic in November.

"I do believe over the course of time this is a warning to anybody that's doing anything that's wrong that the truth usually always come out," Cashman said.

Crane said he didn't believe the scam impacted games as the Astros won the 2017 title, then backtracked and said it was hard to determine. The Yankees lost in seven games to Houston in the 2017 ALCS. The Astros won all four games at home.

"I definitely think it had an affect on things, without question," Cashman said. "Certainly the Houston Astros were the only one with a distinct advantage more so than their opponents. That's the fact. So I don't think anybody can disagree with that even though they may try."

Cashman believes it is important for the Yankees to look ahead.

“Obviously we're upset, our ownership is upset, our front office is upset, our players that were with us in '17 especially are upset and understandably so,” Cashman said. "There's nothing we can do about that at this stage. It's healthiest for the game as we move forward to focus on the present and the future, and try to leave the past now in the past."