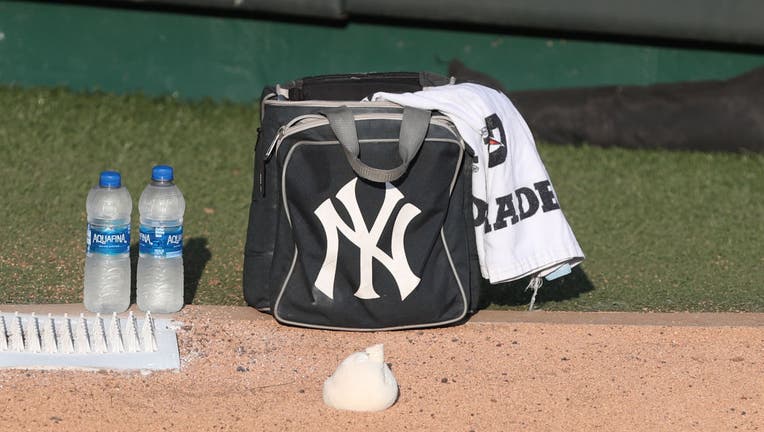 The New York Yankees logo on an equipment bag during an MLB game. (Photo by Scott Winters/Icon Sportswire via Getty Images)

NEW YORK - The New York Yankees released minor league outfielder Jake Sanford on Tuesday after he was accused of some dirty dugout drama, according to multiple reports.

The Yankees selected Sanford in the third round of the 2019 MLB Amateur Draft out of Western Kentucky. He played for Single-A+ Hudson Valley and Single-A Tampa in the Yankees’ organization last season after minor league baseball took 2020 off due to the coronavirus pandemic.

According to NJ.com, Sanford was accused of stealing from his teammates' lockers and emphatically urging his teammates to sell their equipment online. He was also accused of scamming fans by allegedly taking their money for autographs and never delivering.

Sanford deleted his Twitter account this week after the allegations surfaced. He signed with the Frontier League’s Ottawa Titans on Tuesday after the Yankees cut him.

METS' MAX SCHERZER PULLS HIMSELF OUT OF GAME WITH APPARENT INJURY: 'I'M DONE'

He was 0-for-1 in a pinch-hit situation for the Titans against the Windy City ThunderBolts.

The Yankees declined to comment on the situation. MLB officials were aware of the allegations against Sanford, a source told NJ.com.

Sanford made his debut for the Staten Island Yankees in the New York-Penn League and hit .238 with a .701 OPS and seven home runs in 60 games.

According to the New York Post, Sanford wasn’t seen as an elite-level prospect but MLB Pipeline had him in the Yankees’ top 25 prospects list last season.

GET UPDATES ON THIS STORY AT FOXNEWS.COM