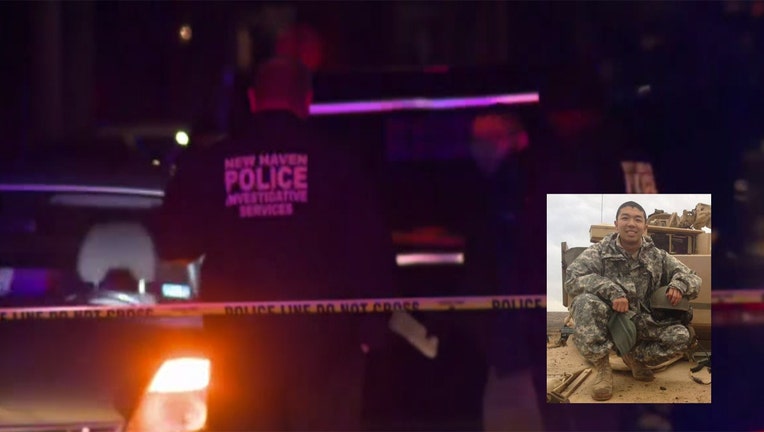 NEW HAVEN, Conn. - Police investigators are looking into whether a Yale graduate student shot to death over the weekend in Connecticut was a targeted victim in a road rage incident that possibly occurred after a car accident, New Haven police said Monday.

Kevin Jiang, 26, a student of Yale's School of the Environment, a Seattle native and an Army veteran, was shot multiple times and found lying outside his car on a New Haven street just after 7:30 p.m. Saturday. He was pronounced dead at the scene. The killing was part of increasing gun violence in the city that is worrying local officials and residents.

Jiang's fiancee had recently accepted his wedding proposal and he was to celebrate his 27th birthday next weekend, according to his Facebook page.

New Haven Police Chief Otoniel Reyes on Monday declined to release details of the events immediately preceding the shooting, saying it could compromise the investigation. But he said police believed it was not random violence. No arrests have been announced, and police are asking witnesses to come forward.

"We feel that it was possible he was actually targeted," Reyes said. "This was not sort of a drive-by. It seems like it was much more up close."

"The Yale community is grieving right now," Salovey said at the news conference. "This is a loss of an extraordinary young man. He was committed to applying his talents to improving the world."

Jiang was scheduled to graduate next fall with a master's degree in environmental science, Yale officials said. He was researching mercury levels in fish in the Quinnipiac River watershed in Connecticut with the goal of informing fish consumption advisories, Yale said.

On his Facebook page, Jiang listed his hometown as Seattle and recently posted a video of his fiancee accepting his wedding proposal. He earned a bachelor's degree in environmental studies at the University of Washington and was an Army veteran and Army National Guard member, according to his LinkedIn page and Yale officials. In the Army, he was a tank operator and a chemical, biological, radiation and nuclear officer, according to Yale.

His fiancee, fellow Yale student Zion Perry, called Jiang a "gift from God," in an email to the Yale Daily News.

"He was a true and righteous man after God’s own heart," she wrote. "Life is so precious and short. My only hope is that he is with his Heavenly Father now in perfect peace."

Jiang's death was New Haven's sixth homicide of 2021. Homicides this year are on pace to easily surpass last year's total of 20. In 2019, the city saw 11 homicides.

The news conference also was called to discuss a shooting at a city school official's home on Friday and how city officials are addressing increasing gun violence. Someone opened fire on Assistant Superintendent of Schools Paul Whyte's house from the outside, sending bullets flying inside but no one was injured.

Mayor Justin Elicker called it a "very, very challenging time" for New Haven and officials are committed to lowering gun violence through a number of actions.

"We had a difficult weekend with two quite significant incidents," the mayor said during the news conference. "It’s indicative of ... a very challenging time for our community that we experienced over the past year with the uptick in violence that is being experienced around the nation."