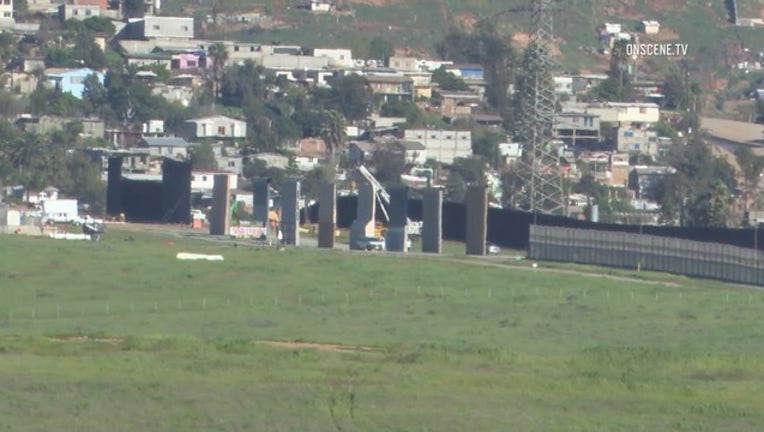 Construction began to replace 14 miles of border barriers in San Diego. Steel barricades will replace a steel-mesh fence that people have cut through using battery-operated saws. The cost is more than $100 million. Feb. 29, 2019

The first panels are in place to replace a steel-mesh fence with 30-foot-high steel bollards, according to U.S. Customs and Border Protection. SLSCO Ltd. of Galveston, Texas, was awarded a $101 million contract in December, with options for an additional $30 million.

The bollards replace a second layer of barrier that worked like a fortress when it was built about a decade ago but is now often breached with powerful battery-operated saws sold in home improvement stores.

Work on replacing a first layer of San Diego barrier is nearly complete, also 14 miles long and made of steel bollards up to 30-feet  high. The old fence, built in the early 1990s, was made of corrugated steel matting used by the military as temporary runways.

The state of California and major environmental groups sued, unsuccessfully, over wall projects in the state, saying the administration overreached when it waived environmental reviews to speed construction. Last week, a federal appeals court upheld a judge's decision siding with the president.

The latest groundbreaking came three days after Trump declared a national emergency to build his proposed border wall with Mexico. The American Civil Liberties Union on Tuesday filed the fourth legal challenge to the emergency declaration.

Trump inherited barriers covering about one-third of the border. His administration has awarded $1 billion in contracts to cover 97 miles,  the vast majority of it to replace existing barriers. Work on his first extension is scheduled to begin later this month - 14 miles in Texas' Rio Grande Valley.