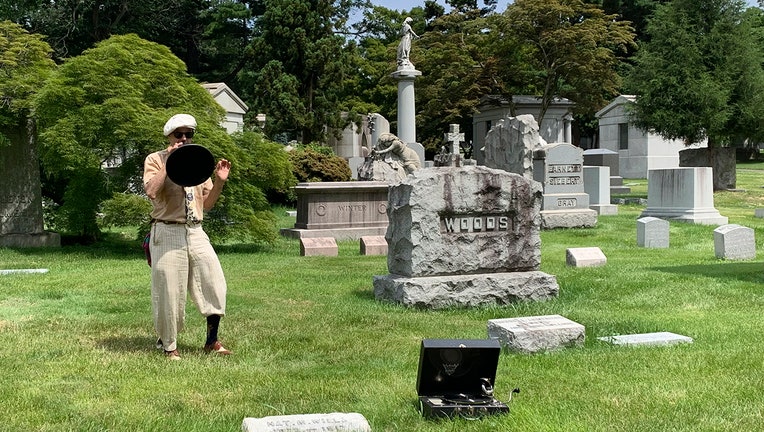 Michael Cumella, aka DJ MAC, speaks through a vintage megaphone near the gravesite of Nat M. Wills, a vaudeville star of the early 20th century known as "The Happy Tramp" at Woodlawn Cemetery in the Bronx on June 27, 2021. Wills was among the jazz an

NEW YORK (AP) - Michael Cumella, dressed in 1920s garb, laid his old Victrola record player down among the tombstones and turned to the small tour group assembled under the towering trees at Woodlawn Cemetery.

"She was the diva of her day. The Beyoncé of her day," he said, brushing leaves off the modest stone commemorating vaudeville star Nora Bayes.

The group had to lean in toward the old windup Victrola to hear Bayes' big voice, necessary in the age before microphones, belting her biggest hit, 1917's "Over There."

The song's author, George M. Cohan, was also honored on this tour of jazz and vaudeville greats buried at Woodlawn, a grand old cemetery and arboretum in the heart of the Bronx. Cohan and his family lie in an imposing mausoleum with Tiffany stained-glass windows.

Other stops included the resting places of jazz pioneers W.C. Handy and King Oliver; dancers Irene and Vernon Castle; comedian Bert Williams; and, at a crossroads known as "Jazz Corner," Duke Ellington, surrounded by Miles Davis, Lionel Hampton and others.

The tour ended at the grave of Irving Berlin, where the old Victrola played "Alexander's Ragtime Band."

"They called it ragtime, but it's really proto-jazz," says Cumella, who DJs and had a long-running radio show under the name Phonograph DJ MAC.

"Musicians and artists gravitated here, aspired to be here," he said. 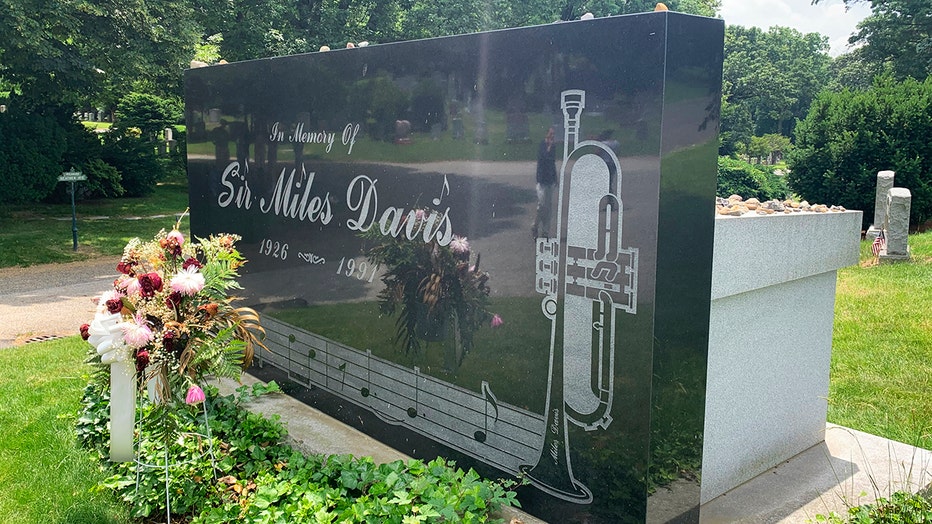 The grave of jazz great Miles Davis at Woodlawn Cemetery in the Bronx, New York, June 27, 2021. The corner is a stop on a trolley tour of "jazz and vaudeville greats" offered by the cemetery. (AP Photo/Julia Rubin)

The Jazz Age musical greats are just one of the reasons a visit to Woodlawn can be fascinating.

Other walking and trolley tours cover themes such as Black, Irish, Italian and women's history. Recent events sponsored by the Woodlawn Conservancy included a tour of resting places of passengers on the Titanic.

In addition, the non-denominational cemetery is a trove of funerary art and shady, hilly beauty. Its trees include several specimens recognized by New York City as "Great Trees." The cemetery can feel far removed from the busy city blocks around it. 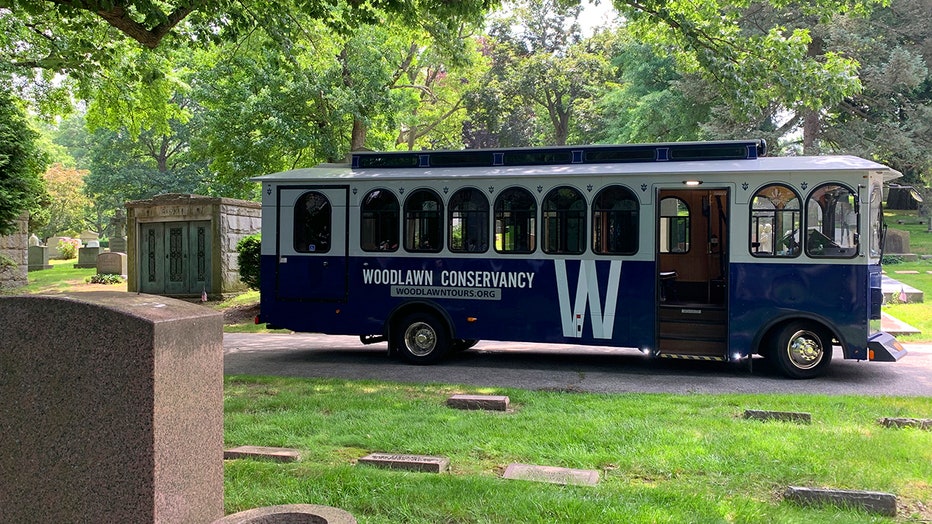 A trolley waits during a stop on a tour of jazz and vaudeville greats at Woodlawn Cemetery in the Bronx on June 27, 2021. The tour takes visitors to the gravesites of Irving Berlin, Duke Ellington, George M. Cohan, W.C. Handy, King Oliver and other m

As Bronx green spaces go, Woodlawn is something of an undiscovered gem compared to the better-known Bronx Zoo and New York Botanical Garden nearby. (The cemetery is easy to reach by public transportation, too, with Woodlawn stops on the subway and Metro-North Railroad.)

There are grand, castle-like mausoleums with statuary and stained glass, and also modest, flat gravestones. The cemetery and its crematorium remain active; people are still buried there.

Woodlawn was founded by a group of wealthy New Yorkers in 1863 in a spot easily accessible from Manhattan. It was designated a National Historic Landmark in 2011, "a popular final resting place for the famous and powerful."

Cumella was a fan of early popular music living in New York City when he realized so many of his musical heroes were lying in the ground at Woodlawn. He started visiting the gravestones with his friends, and soon, he says, the Conservancy helped him set up his jazz and vaudeville trolley tours.

"I'm a big advocate for letting people see and hear what it was like to be a music listener 100 years ago," he says.

His tour involves a little time travel. The Victrola that Cumella sets up at every stop plays 78 r.p.m. records and is powered by a spring. He times himself with a vintage pocket watch, and amplifies his voice with an old-fashioned acoustic megaphone, like a director in an old movie.

He tries to keep the legacy of the era's artists alive; Bayes, for example, actually had no headstone at Woodlawn until Cumella led an effort that got her one in 2018. 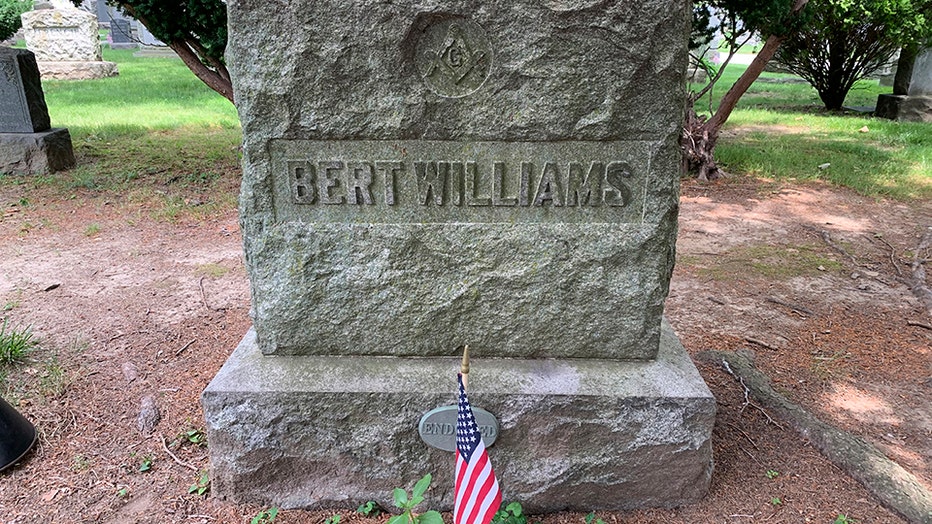 Lauren Hinton, who teaches second grade in New York City, took a recent tour and hopes to incorporate the music and musicians into her lessons.

"We learned to tap dance last year," she says, noting that Harold Nicholas, one half of the famous dancing pair the Nicholas Brothers, is buried in an unmarked grave at Woodlawn. Efforts are underway to buy him a headstone.

"It's important for people to know about the past so they (artists) don't fall into obscurity," she said.

Also on the trolley were Nancy Gerstman and Bruce Goldstein, filmmakers from Manhattan.

"I loved hearing the music, and putting all those people into context. People I wouldn't have known about, and now I want to know more about them," said Gerstman.

"There are so many clues about people from the gravestones," added Goldstein. For instance, he said, he hadn't known until he saw the family tombstones that Berlin's infant son, Irving Jr., died at 1 month old, on Christmas Day 1928. "It tells you a lot about them."

Woodlawn is a trove of cultural history, he said: "This is one of the wonders of New York."