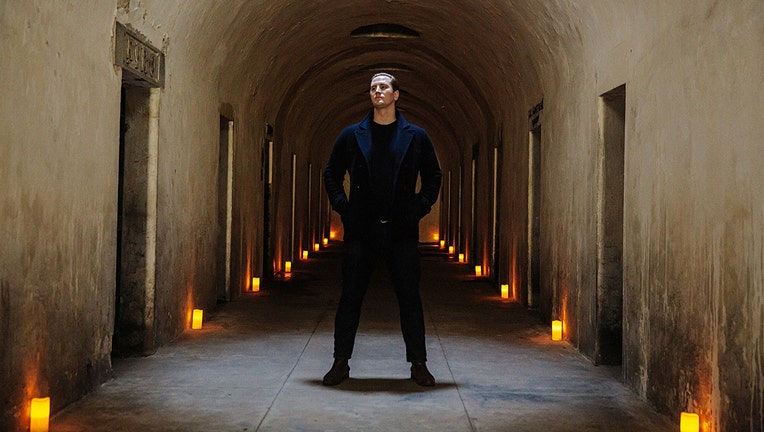 Andrew Ousley, the founder of Death of Classical, in the catacombs at Green-Wood Cemetery in Brooklyn. (Unison Media photo/Kevin Condon)

NEW YORK - One night in June a couple of years ago, I found myself in a relatively dark chamber of death partially beneath the surface of a cemetery in Brooklyn. And I wasn't alone.

But the few dozen souls there were neither dead nor trespassing. We were spectators at a performance of an opera staged inside the catacombs of Green-Wood Cemetery. My seat in the audience was just steps away from a crypt. You know, the kind containing human remains.

Despite the creepy surroundings (or perhaps in part because of them), that night's performance of Henry Purcell's Dido & Aeneas was a uniquely engaging and emotional experience for the audience and, I imagine, the performers, too.

The weirdly creative force behind that event was Andrew Ousley, the founder and artistic director of Death of Classical, a nonprofit that produces musical experiences at Green-Wood, both in the catacombs and outdoors on the grounds of the cemetery, called The Angel's Share. The third season launched this week with Hymn to the City in partnership with the New York Philharmonic.

This is how Death of Classical describes what you can expect: "Attendees will be taken on a journey across the Cemetery, hearing the stories of Green-Wood's extraordinary permanent residents — many of whom are members of the New York Philharmonic community — interwoven with music, dance, and poetry. From Leonard Bernstein's gravesite to the Hill of Graves, the Civil War Soldiers Monument to the Catacombs, we'll remember the battles lost and won, the challenges overcome, and the boundless ingenuity, open-hearted creativity, and indomitable strength of our beloved city."

Those sentences, especially the final two dozen words, made me want to ask Ousley much more about where his series fits into the cultural landscape of a New York jolted by a devastating pandemic. So I did.

Your third season of performances at Green-Wood Cemetery launched this week. I'm almost afraid to ask how Season 2 went amid the pandemic. What had to change last year and what is even different this year in terms of safety and any other considerations?

OUSLEY: We pretty much had to scrap all of our plans for last year's season, but we were able to produce one single event in October — one of only a handful of live in-person music events in New York — that was called To America. Taking place at the apex of the pandemic and in the weeks before the election, it was a kind of lament, love song, prayer, and plea to America during a time of deep uncertainty, and it featured a similar structure to Hymn to the City, with small groups of distanced audiences following a promenade-style program through the cemetery, hearing chamber music performances in different locations. This season we're adapting by having smaller audiences, more outdoor events, and being extremely careful with safety precautions. 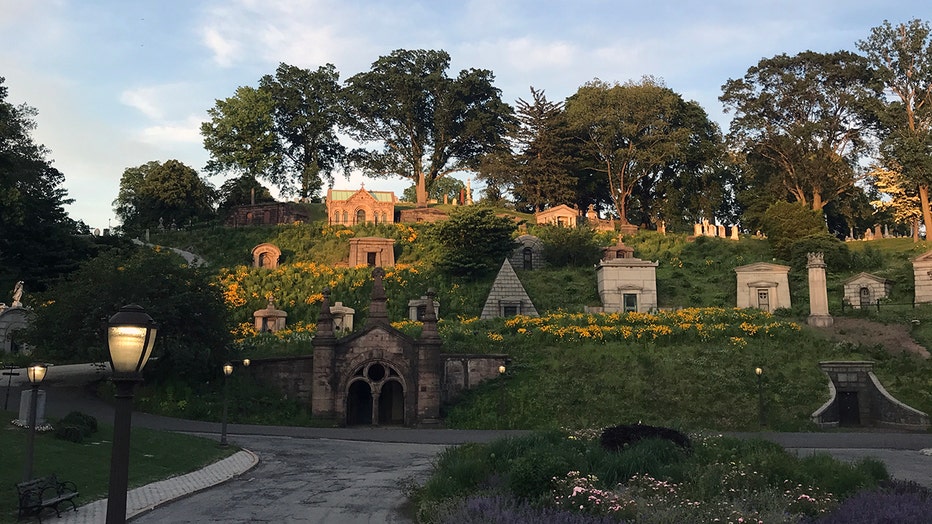 In curating this series, what were you looking for in the performers and pieces?

OUSLEY: In general, we program our concerts to deal broadly with themes of transcendence, spirituality, mortality, and other universal aspects of the human condition. After the collective trauma, turmoil, and loss of the past year — from the pandemic to the protests to the political division — we felt it was important to create a unified season of live music events that would bring people together around all that we've been through, to mourn what's been lost, while also trying to remember what is still good in life, and the shared experiences that unite us.

Do you think some patrons from prior seasons or other fans of music performances won't want to come to Green-Wood because of everything we've gone through? If so, what would you want them to know?

OUSLEY: Our concerts at Green-Wood aren't focused on the morbid or the macabre — it's about celebrating life in its beauty and shortness, and appreciating the time we have together. A cemetery is the perfect place for it since it's ultimately a space that's dedicated to maintaining a connection to people — their life and memory and legacy — after they're no longer physically with us.

I saw this quote from you: "We see light at the end of this long, dark tunnel." This actually made me think of the way Green-Wood's catacombs look: a long, dark tunnel in a cemetery, which represents death and loss. How do you envision the performances relating to, communicating with, and transforming the spaces above and below ground — especially after what New York has endured in the last year-plus?

OUSLEY: As a native New Yorker, [I created] this entire program [as] a celebration of the city I love, and an expression of gratitude to the people of New York City for the way that they always rise to the occasion, no matter how great the challenge. I think back not only at how we took care of each other and our city throughout the course of this pandemic but also even before that. Walking through the East Village after Hurricane Sandy and seeing people furiously pedaling energy-generating bikes so their neighbors could charge their phones and call their loved ones. Walking home in the 2003 blackout and watching bodega owners give away ice cream to people before it melted. The first time I turned onto Sixth Avenue after 9/11 and saw the thousands of American flags hanging from every window as far as the eye could see.

Each performance in Hymn to the City features music tied to the space where it's performed, as well as to people buried at Green-Wood, and the different spaces relate to aspects of our city's resilience — the first responders, those who fought for freedom and worked towards peace, the immigrants who came here to form the backbone and lifeblood of our city, the pioneers who took us beyond ourselves, and the everyday citizens who come together to take care of each other in times of need. 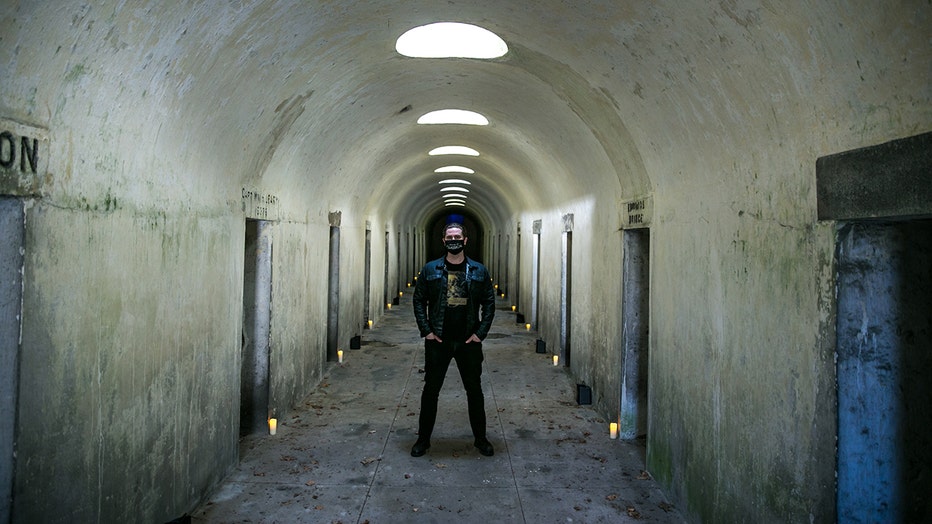 Andrew Ousley wears a mask with the words "Death of Classical" in the catacombs at Green-Wood Cemetery in Brooklyn. (Unison Media photo/Kevin Condon)

Do you have anything else you want to share about your season? What about your thoughts on the state of the arts in general in New York as this pandemic, hopefully, winds down? What will be forever changed and what is the same?

OUSLEY: I think the lasting impact of the pandemic hasn't really come into focus yet but I have no doubt there will be seismic changes to our industry. That said, one thing that has never been clearer is the fact that people need the arts in their lives, and the arts always find a way to survive and adapt! I feel optimistic for the future.

The Angel's Share Season 3 begins with New York Philharmonic, Hymn to the City, June 3–5, 2021. The season then features seven more programs and ends in late October. Find out about upcoming performances at deathofclassical.com/angelshare.

Founded in 1838, Green-Wood Cemetery, a National Historic Landmark, remains an active burial ground. You can access its main entrance at Fifth Avenue and 25th Street in Brooklyn.

Arun Kristian Das is a senior digital content creator for Fox5NY.com. He has lived most of his life in New York City and tries not to spend too much time in cemeteries. Follow him on Twitter @arunwithaview.